The Durham student who was removed from today's discussion of free speech on campus due to security concerns secretly rejoined the panel, violating the society's agreement with the SU.

Angelos Sofocleous, a Philosophy student, was removed from the panel last week following security concerns raised by the SU.

He attended the event instead as an audience member, which is not believed to have been disallowed. As the host was introducing the discussion, an audience member shouted: ‘Why can’t he [Mr Sofocleous] just go up there?’, pointing to the panellists table.

The host and society’s President, Izzy Posen, said: 'If the audience want to hear from him then I don't have a problem'.

As neither audience members nor panellists opposed his participation, he joined the panel. During the discussion, he said it is 'ridiculous that anyone's right to not be offended is more important than their right to freedom of speech'.

Angelos Sofocleous, a Philosophy MA student from the University of Durham, was also due to join the panel. However, ‘security concerns’ raised by @Bristol_SU prompted the removal of Sofocleous. Read more: https://t.co/JK8StRtq4b

Alongside him were panellists Dr. Bryn Harris and Bristol’s Professor Christopher Bertram.

Mr Posen was overheard asking Professor Bertram before the event started how he would feel if the Philosophy student joined the panel, raising suspicions that the move was tactically planned to undermine what the society has previously labelled ‘SU bureaucracy’.

Mr Posen denies the allegations. He said he 'suspected it might happen' given that the Durham student had already booked his train ticket and so told the other panellists about the 'suspected eventuality'.

He added that he 'assessed that it wouldn't be a safety concern because it was not public'. The audience were not instructed against leaking Mr Sofocleous' participation to friends or on social media before or during the event. 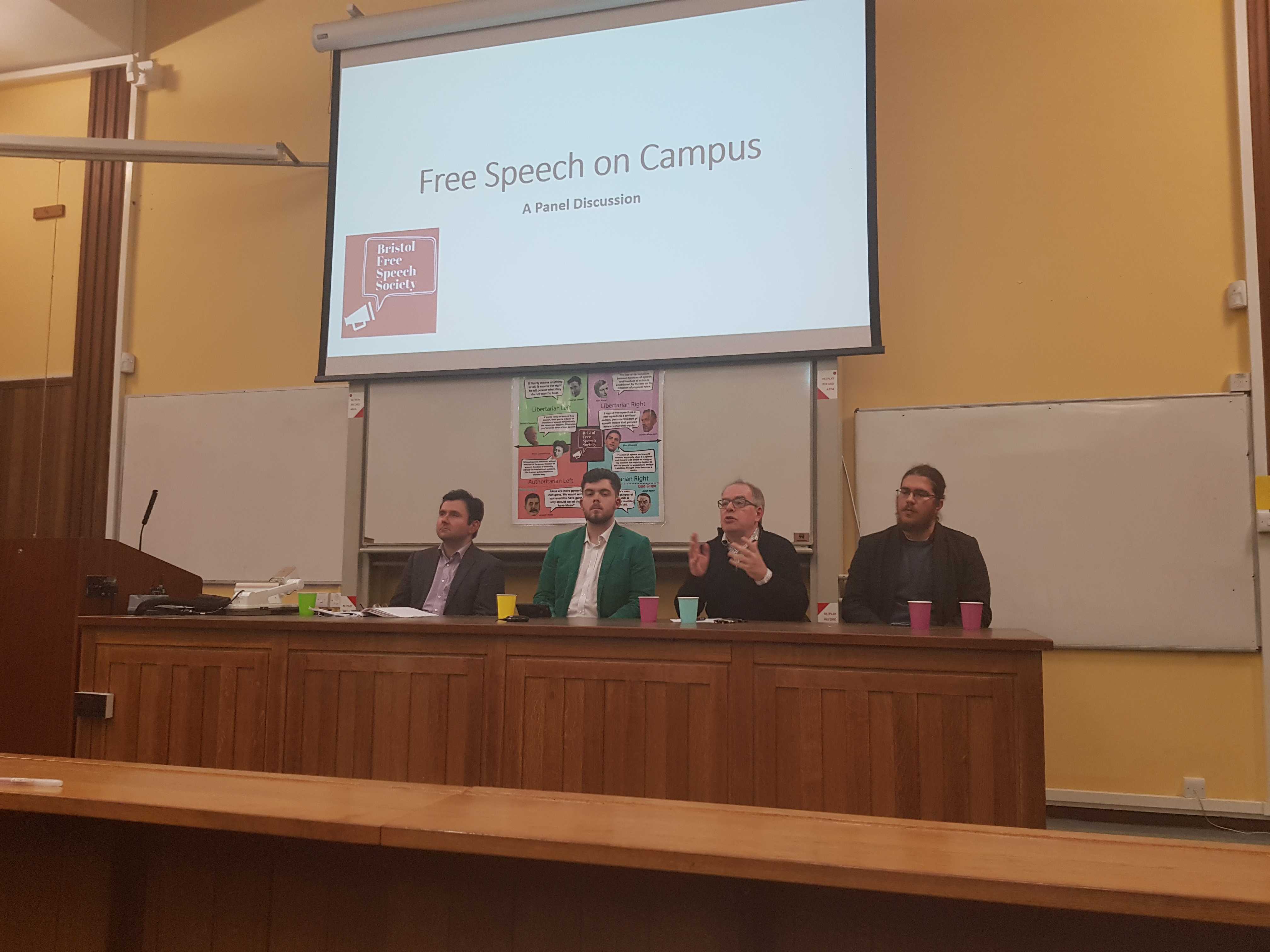 A spokesperson for the SU said: 'We’re glad to hear that the event went ahead safely. We’ll be meeting with the society shortly to review what happened on the night.'

The all-male panel discussed whether free speech is under attack on campus, and how we can define 'hate speech'. Mr Sofocleous said that 'people expressing hate speech do not understand that they are wrong', and argued that supressing their views may lead to their views strengthening.

Mr Posen said the result of the event is a 'positive message that we can have respectful debate'.

The event has now ended and everyone has left.

It is the latest in a growing tension throughout universities on the issue of free speech, with division across this campus on whether Mr Sofocleous’ removal constitutes ‘no-platforming’.

The Free Speech Society accused 'Student Union bureaucracy' of limiting freedom of speech, which the SU refutes. 'Bristol SU has not refused Angelos Sofocleous as a speaker. Bristol SU is committed to freedom of speech and the rights of all our students to discuss difficult and sensitive topics', a union spokesperson said.

Last year, Mr Sofocleous courted controversy and was accused of transphobia when he retweeted an article by a Spectator columnist with the headline: 'Is it a crime to say women don't have penises?'.

The Philosophy student was sacked as assistant editor of his University journal as a result of the retweet, but Durham SU later apologised for his dismissal as being 'unfair and undemocratic'.

He was subsequently removed from the panel as the organiser’s said it would be too difficult to find another date that was suitable for all the panellists.

Bristol SU refused to release the assessment report explaining why this decision was made, but it is thought that this tweet caused the concerns over public disorder.

In the discussion, Mr Sofocleous responded to a question about whether individuals should be fired from a job because of personal beliefs. 'I do not see what their personal views have to do with their job', he asserted.

Sunderland ‘Til I Die: do we really want to see behind-the-scenes?