The Croft Magazine // Exclusive with the University of Bristol graduates who are turning heads in the fashion world.

I switch on my laptop and open up Zoom as I wait to interview two young entrepreneurs. They are two out of the six team members of Bristol-based independent clothing brand, Young Goat. Unasked for thoughts fill the hiatus as I find myself wondering what they might think of an old lilac princess bed canopy hanging in the background of the Zoom frame; this is my teenage bedroom, I really should sort it out if I am to be living here for who knows how long during this tedious period of lockdown.

Seconds later the thought process is interrupted as Al and Jack arrive simultaneously, in true 2020 style, popping up onto the screen of my laptop. I immediately notice contrasting monochrome T-shirts worn by both, with the Young Goat logo printed onto the centre of each one. I ask them how they are doing and they are frank and concise. They don’t seem to be wanting to waste any time, so rather than making small talk I decide to ask the question that forces an intriguing answer – where on earth the idea and inspiration came from and how the brand began in late 2019.

As a clothing brand, I was expecting an answer such as ‘fashion has always been a passion of ours’, or ‘we were really inspired by the designs of this streetwear brand’. But that wasn’t quite the type of answer I received. In fact, I don’t think the word ‘fashion’ or ‘style’ or any related synonyms even arose in conversation at first. Al explained, ‘It stems from UBAFC – University of Bristol Football Club, during a season where the team just seemed to be winning on a weekly basis, so a few of the boys started saying, “We’re the young GOATs’’ (Greatest Of All Time), to describe how the club was doing. So, it stemmed from a bedroom idea to an initial T-shirt design, which we started wearing around the university, and our mates liked it a lot.’ I’m immediately thrown off guard – I know nothing about football. I begin to think that I should’ve listened to at least some of my boyfriend’s or my sister’s attempts to get me into liking football.

Thankfully the conversation directs itself from their love of football to how the team gained inspiration for their designs. Al admits that they ‘got quite lucky because Reuben, the guy who came up with the logo, came up with it the first time he did it and it just looked really good. From there, we thought we should probably start learning about what we’re doing and look into how to design things, rather than just banging it in the middle. But it worked so well at the start, that we haven’t really had to show anyone that we’ve gone further than just putting the logo in the middle so far, so it’s worked quite well. I’d say that that’s a bit of luck, but also I’ll give it to my mate and say he’s got a bit of a knack for design.’

They detail their design process too and confess with a degree of modesty that some of their initial designs on paper can be quite terrible and laughable, ‘we’ve sometimes tried to draw the goat and it ends up looking like a completely different animal’, but that they then move to the computer using Photoshop and Illustrator for definition, before sending them to the manufacturer to be made into samples.  Once these are returned, they make small adjustments if necessary.

They seem willing to be open and this is part of the charm of the brand.  They are down to earth and happy to admit their failures and struggles; Jack says that they have ‘thrown themselves in at the deep end’ because of their varying degrees, from Chemistry to Classics, all of which have nothing to do with fashion or design and so, ‘It’s all trial and error really’.

Minimalism is key for Young Goat. The phrase ‘less is more’ clearly applies to the brand’s aesthetic. Al mentions how striking a certain simplicity, emphasising the ‘GOAT’ message is of key importance to the brand’s identity. Consistency in the quality of their clothes is maintained and each of their t-shirts is made with the highest grade of cotton, people always seem to comment on how nice the products feel.

FUZE 2020’s fashion, music and dance show showcased Young Goat’s collection, pitching them as a local Bristol brand formed by students, with a focus on mental health awareness. Young Goat’s promotion of mental health focuses on promoting self-confidence rather than discussing illnesses themselves, which I felt as a clothing brand was sensible as they do not have medical or counselling expertise. Instead they promote self-awareness and feeling good about yourself, within an industry which often promotes unattainable standards of beauty. Instead, Young Goat advocates that ‘anyone can be their own GOAT’, which stems from the visibly positive effects seen on the pitch after having praised each other’s successes. Al elaborates, saying, ‘we could see how the community was benefitting from basically four letters,’ as confidence began to grow amongst team members. Jack amusingly but hearteningly adds, ‘you don’t necessarily have to be Beyoncé to be the GOAT.’

We move on to discussing how they are working under the current COVID-19 circumstances and how things have had to be altered. They mention the difficulties of contacting manufacturers because of closures and how they’ve instead used quiet periods to build strong, positive connections with their customers through asking for customers’ honest feedback via interactive marketing methods such as polls; clearly they are adjusting to this uncertain period as best they can.

However, they admit that along with adapting Young Goat during lockdown, creating and working at an independent brand can be difficult. In particular, a lack of capital seems to have been the main hurdle. Beginning with hardly anything, the brand evolved using the university’s tools to earn money from a few competitions they entered, where they were awarded grants.

I ask them if they have any advice for anyone also looking to begin an independent clothing brand. Al says, ‘at the end of the day, capital is crucial in getting your idea to grow. I think planning that way in advance would be a good step.’ Being a broke student, I empathise and nod in agreement as he adds, ‘if we had more money, things would speed up massively.’ Jack however insists the importance of simply ‘going for it’ and not being afraid of making mistakes or getting it wrong. They both agree that simply asking people is also an important step as Jack continues to explain, ‘it’s surprising how many people who don’t actually know you personally are willing to give you advice and help you. Even just small pieces of information – if you take them all from different places and add them together you end up with so much free knowledge.’

Meritocracy is obviously important to Young Goat, as when I ask them who inspires and influences them and the brand, they state that these are people who have worked their own path to wherever they want to be. They collectively have many inspirations – ‘whether a musician or a footballer who has come from a certain background where it wasn’t normal to be successful, but they have and they’ve almost become their own GOAT, and I think that’s what we want to focus on.’ This is also measured when choosing influencers to represent the brand – people with similar mindsets to the brand’s identity, who can relate to Young Goat’s story in some way, ensure brand integrity rather than simply choosing an influencer based on their popularity.

In order to develop and succeed as a brand, Young Goat has looked at the work of other streetwear brands for inspiration and business tips but I am reassured by them that they don’t simply copy others’ ideas. They have their own strong viewpoint and feel that putting your own unique twist on concepts is vital for a successful identity. Although the team share a similar mindset and have all come from the same footballing background, with there being six of them, often there are very diverse tastes and ideas, though Al acknowledges proudly, ‘we know that when we do agree, we can create great things.’

They dream big. This is clearly so much more than just an inside joke that a university football team then decided to make some money from. Although it didn’t begin with a passion for clothing, style or fashion, it instead came from a sense of positivity amongst a group of friends each sharing football as a common interest. Speaking with Young Goat, I am reminded that fashion doesn’t always have to be just about clothes. It can also be powerful. It’s not simply frivolous, as it’s often deemed to be. Here, it comes from a collective sense of positivity, allowing individuals to identify with one another, unite, and feel like themselves, through the medium of fashion and artistry.

Their dream is to make the business into a full-time career and Jack excitedly lists their aspirations, ‘our merchandising, opening shops, getting the website sorted, and then there’s the other side of the brand where we actually want to make an impact, within the place we started – the uni, and our charity work in Bristol, and we really just want to make an impact in every way we can.'

We say our goodbyes and as the Zoom call ends, Jack and Al disappear from my screen. My room suddenly feels slightly lonely again. I think to myself in a sudden epiphany, ‘I WANT TO BE MY OWN GOAT!’

Check out Young Goat on their shiny, new website! 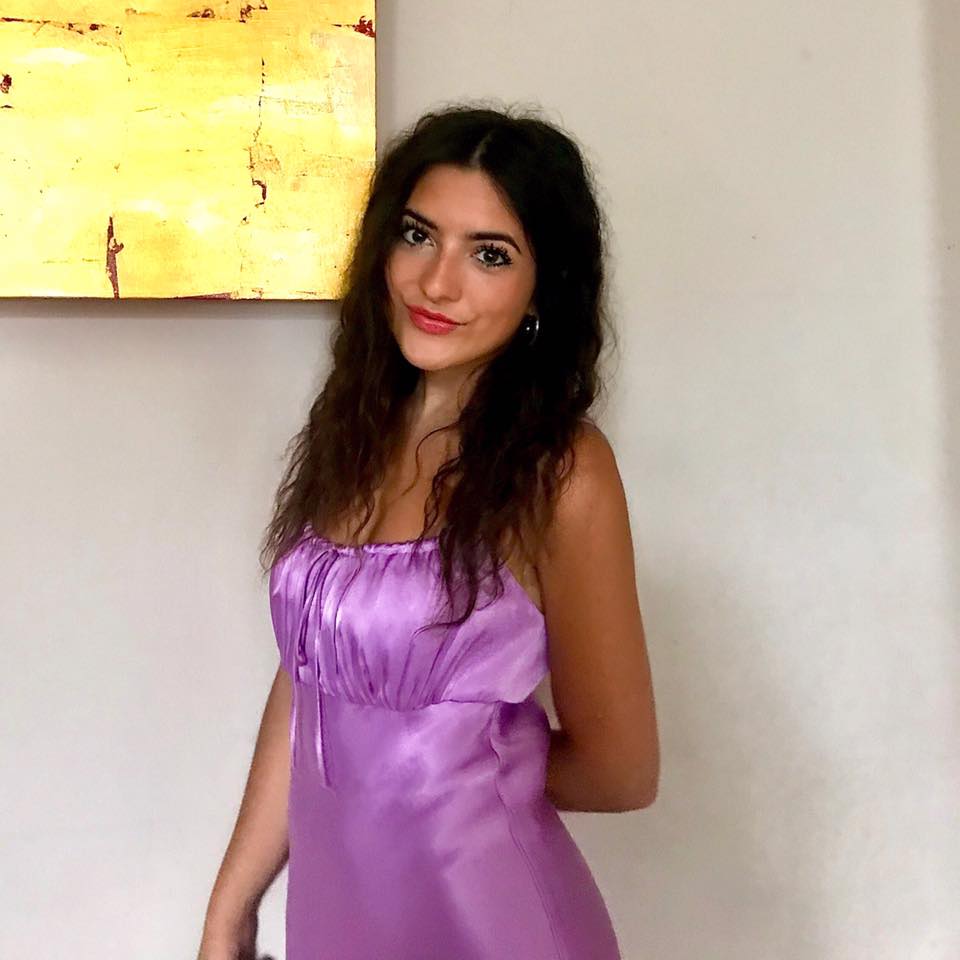 Style Editor of The Croft Magazine

The Disproportionate Educational Impact of Covid-19 on BAME students