A petition calling for Britain to revoke Article 50 has surpassed one million signatures, with Bristol West having the most number of signatories in the UK

The petition, which is available to sign on the UK Government and Parliament website, states that ‘we need to put a stop to’ the claim that leaving the EU is the ‘will of the people’ and calls for Article 50 to be revoked. 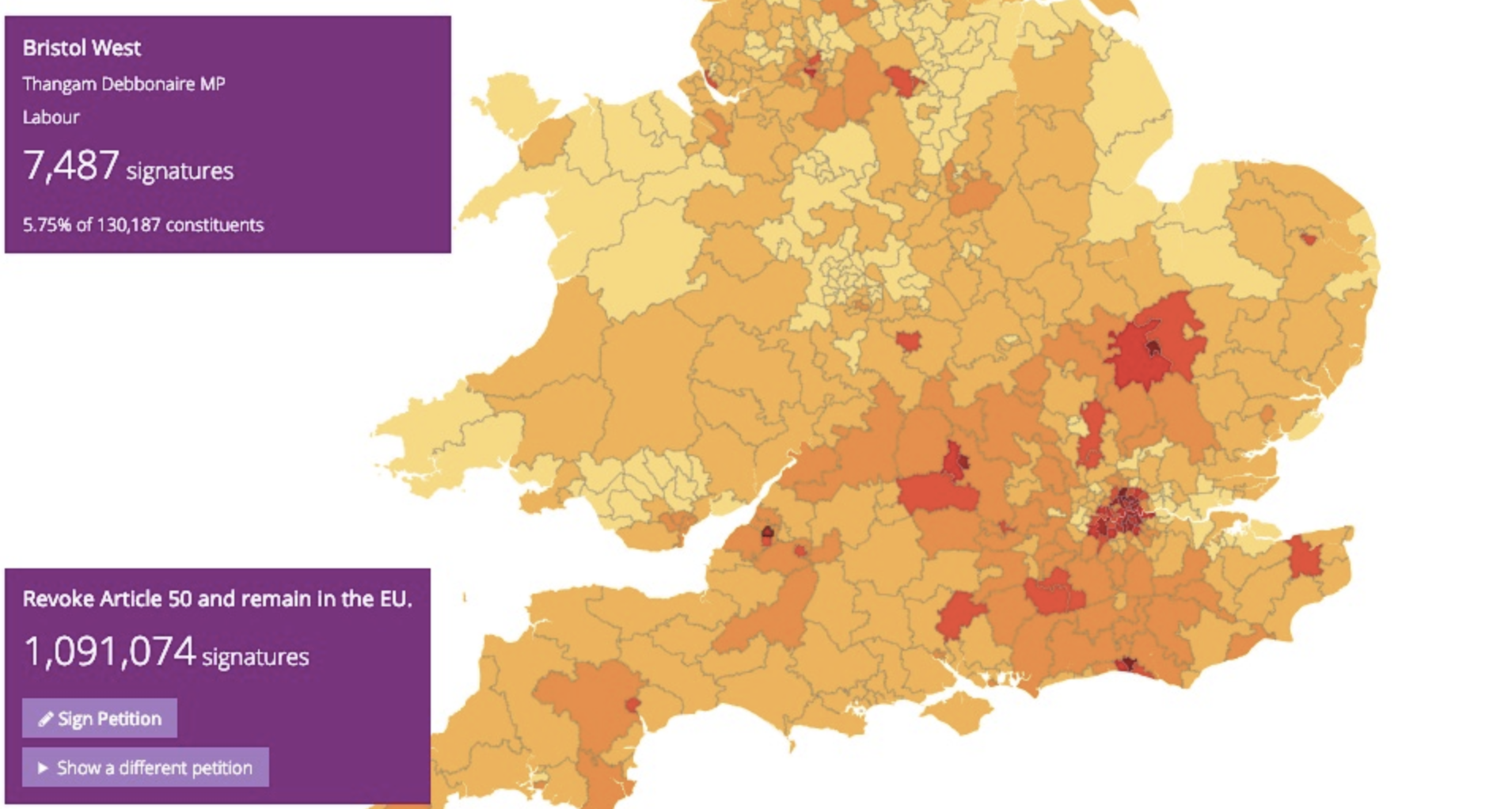 This petition received so many signatures that the website has crashed at least once today, with the petitions committee stating that at some moments, there were over 2,000 signatures a minute.

In particular, according to the site’s own analytics, the greatest number of signatures has come from Bristol West, an area whose MP is Labour’s Thangam Debbonaire. Bristol West includes the Bristol University area, as well as where the majority of students live.

The constituency with the second highest number of signatories is Brighton Pavilion, whose representative is the Green MP, Caroline Lucas.

At the time of writing, over 7,350 constituents from Bristol West have signed the petition.

Speaking about the popularity of the petition, Thangam Debbonaire, MP for Bristol West told Epigram that:

'It is clear the country is not ready to leave the EU next week. I am focussed on securing this extension and preventing the UK from crashing out without a deal. This would be disastrous for Bristol's jobs, environment and much more.

'One option is revoking Article 50 and it is no surprise that my constituents are topping the charts of signatories to the petition to revoke it. I am proud to serve and represent a constituency which is so engaged in the political process. The vast majority of people in Bristol West clearly share my view, that remaining in the EU is the best possible relationship for the UK to have with its neighbours'.

‘We are at a cliff-edge and neither the Tories nor Labour have a plan beyond jump and hope for the best.

‘Liberal Democrats and I have from day one argued that this process must end with a People’s Vote, giving the public the final say on the deal with the option of remaining in the EU.

‘If an extension [to Article 50] won’t be granted allowing enough time for a People’s Vote, then Article 50 must be revoked. At which point I personally advocate a national conversation through a citizens’ assembly before presenting that to the people’.

Bristol West is one of the constituencies with the highest number of signatures! https://t.co/REwvDprguB

Speaking to Bristol University students who have signed the petition, one second year Politics and International Relations student, Maia Miller-Lewis, told Epigram that ‘The shambles surrounding Brexit has gone on too long. The situation is now untenable. It would be a socio-political and economic catastrophe if we leave with a no deal. This is no time to stand on precedent or to plough ahead with an obviously floored dynamic’.

Whilst Bristol West is becoming highly prominent on the anti-Brexit petition, this is unsurprising since in the June 2016 referendum on Britain’s relationship with the EU, Bristol West voted decisively to remain.

More recently, Our Future Our Choice, an anti-Brexit youth group campaigned in Bristol two weeks ago and many Bristol students as well as representatives from Bristol SU are going on a march calling for a People’s Vote this Saturday in London.

On the march this weekend, Thangam Debbonaire told Epigram that she was 'encouraged by many people in Bristol who tell me they are going' and that she shares 'their conviction that another public vote may be the only way out of this mess – and in this vote, remaining in the European Union must be on the ballot paper. If we get this vote, I would of course campaign for remain, as I did last time.'

Have you signed the petition? Let Epigram know!