'This is not an anti-Israel motion': Students vote for Uni to divest from West Bank

A divided Annual Members’ Meeting narrowly voted for Bristol SU to lobby the University to divest from Israel’s occupation of the West Bank.

The initial motion, which was later amended, aimed ‘to persuade the University against buying the products and services of companies with involvement in settler activity'.

Proposed by Layla Assam and seconded by Mason Ammar, it called on Bristol to follow the example set by the University of Leeds in the hope that a boycott would make Israel’s occupation of the West Bank less economically viable.

The final results of a secret ballot were 128 in favour of the amended motion, 92 opposed, with 33 abstentions.

In her proposing speech, Layla Assam said she feels 'grateful and privileged for education and opportunity' but is 'ashamed with the fact that my university has links to financial companies that support Israel, that facilitates the apartheid and the ongoing illegal occupation of my people'.

She called on the members to 'imagine a world where Palestinians as young as 10 years old are routinely taken from their homes at gunpoint in night-time raids by Israeli soldiers, with more and more illegal settlements being built each day'.

She added: 'UK universities remain deeply complicit with Israel’s apartheid regime through their investment and institutional links, and we as a group of students […] cannot be complacent.'

Nina Freedman, President of the Bristol Jewish Society, spoke in opposition to the motion. While insisting that she was not indifferent to the plight of the Palestinian people, she criticised the proposal for including the word ‘apartheid’ to describe Israel’s conduct.

She claimed it was a 'gross misuse' of a term that ‘unnecessarily vilifies Israel and does an injustice to those who suffered in South African apartheid’.

Mason Ammar supported the use of the word 'apartheid', arguing that the UN has used it in relation to the occupation and reaffirming that he feels 'offended by an apatheid regime'.

One successful amendment, proposed by Gidi Ezra, demanded that goods that had been produced through other violations of international law be subject to the same boycotts as those produced in the Israeli-occupied West Bank. He alluded to products from Russian-occupied Crimea, Turkish-occupied North Cyprus and Moroccan-occupied Western Sahara.

It means the SU will now be lobbying the University to boycott a number of countries.

Opponents to this amendment argued that the University should tackle 'one issue at a time' rather than focusing on all injustices.

A second amendment, proposed by Sabrina Miller, called for the University to retain and strengthen links with the ‘world-class’ universities in ‘Israel proper’. This amendment was rejected, with the opponent starting their speech by saying 'Israel is a racist apartheid state'.

In an increasingly heated debate, one student accused the motion’s authors of ‘threatening’ the University of Bristol’s Jewish population by deliberately targeting the only Jewish state without holding other nations to the same standard. 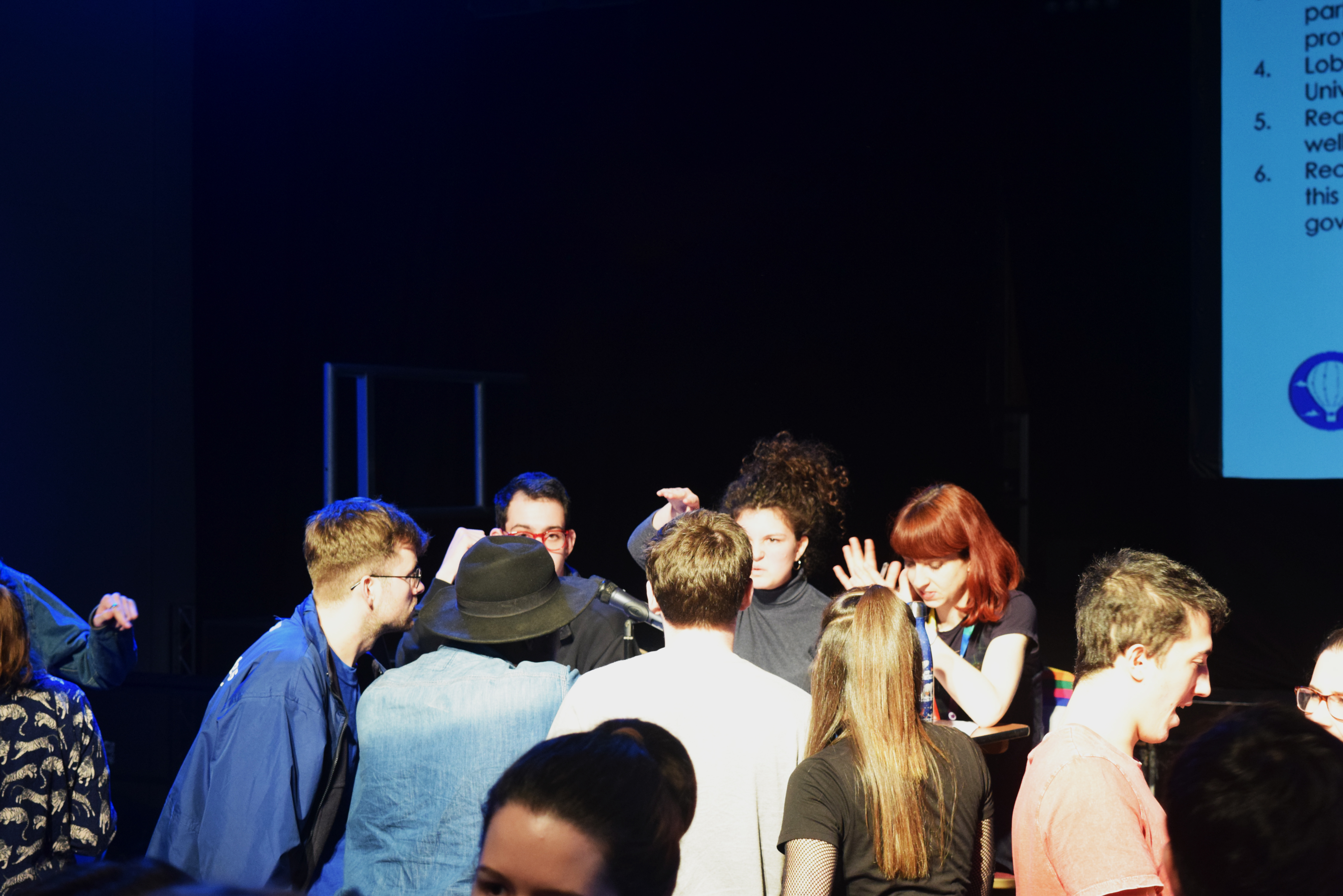 In response, Mason Ammar, last year's Undergraduate Education Officer, insisted that ‘this is about the illegal occupation of Palestinian land and the Palestinian people.’

Oliver Briscoe, representing Bristol University's Conservative Association, labelled it as a ‘thinly-veiled anti-Israel motion’, questioning whether it would be counter-productive to peace in the Middle East.

Layla Assam declared that 'this is not an anti-Israel motion', and strongly denied that it rejects Israel's right to exist. She made clear that the motion 'does not say we want to boycott Israel' but rather it opposes the persecution of Palestinian people under an Israeli government.

With questions and responses applauded and cheered in equal measure, hecklers threatened with code of conduct warnings, and discipline on the verge of breaking down, the Chair of the Student Council Zoe Backhouse put the matter to a secret ballot. This came after an initiative to have the motion discussed in greater depth at a forum was rejected.

In an increasingly heated debate, one student accused the motion’s authors of ‘threatening’ the University of Bristol’s Jewish population by deliberately targeting the only Jewish state without holding other nations to the same standard.

Due to the intense debate surrounding this subject, the Annual Members’ Meeting was only able to deal with five other motions, four of which passed.

The first, proposed by Maddy McCarthy, called for the SU to lobby the University to declare a climate emergency and become carbon neutral by 2030. It was adopted almost unanimously.

A second successful proposal, put forward by Elspeth Taylor and seconded by Hannah Rose, requested that the University change its default search engine to Ecosia. They cited that ‘for approximately every 45 searches carried out on Ecosia, a tree is planted in one of their partner projects around the world'.

Further successful motions were put forward by Syirah Ami and Sally Patterson to include gender identity in SU by-laws, and by Francesca Gluscevic to improve the supportive networks for care leavers and estranged students by setting up a Network Chair.

The one unsuccessful submission of the evening was an attempt by Sunil Singh to get the Student Union to reiterate their commitment to, and compliance with, the ‘Freedom of Speech Code of Practice 2017/18’. Speaking against the motion, Luke Tyers argued that the SU shouldn’t provide spaces for people to espouse their ‘dangerous views’.

The Annual Members’ Meeting also offered an opportunity for SU Officers to become accountable to students, and there were presentations on what has already has been achieved, such as a £10,000 Graduation Hardship Fund, and what is to come, including microwaves in the Student Union.

Due to the meeting’s failure to achieve a quoracy of 1.5 per cent of the University’s student population, the aforementioned successful motions will eventually have to go to the Student Council for ratification. The seven proposals which were not heard will be rolled over to the next Student Council.

What do you think of the motions passed - or rejected - yesterday? Let us know!

An unofficial hierarchy of biscuits

Complacency in the Age of Big Data