Today [Friday 4 January], the MP for Kingswood visited the University of Bristol to see first-hand how futuristic university research could help to solve some of society’s big challenges.

Mr Skidmore, who used to teach history part-time at the University of Bristol, was also introduced to the University's plans to create a new enterprise campus near Temple Meads. The campus will focus on developing technologies which will deliver real-world benefits. 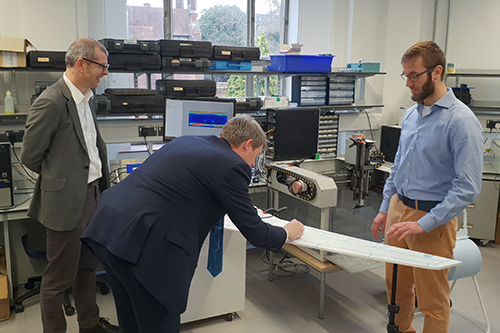 Professor Guy Orpen, Deputy-Vice-Chancellor for New Campus Development, said: 'It's been fantastic to welcome Chris back to the University in his new capacity as Universities Minister. We welcome the government's investment in new technologies and its commitment to creating high skilled jobs across the UK.'

The Minister’s visit follows an announcement from the Department for Business, Energy & Industrial Strategy confirming that £7 million of government investment will fund mini robots to be used in underground pipe networks. The development of mini robots, capable of inspecting and repairing pipes, is one of the pioneering projects funded by the Engineering and Physical Sciences Research Council (EPSRC).

Alongisde three other universities Bristol is working to develop tiny devices around 1cm long that use sensors, navigation and communication systems to detect, report and mend faults in the pipes and eliminate the need for human intervention.

Last month, it was revealed that such ultrasonic technology could ultimately allow surgeons to perform a range of medical procedures, all without touching the patient.

Mr Skidmore said: 'Having previously taught at the University of Bristol, I know just how deserving it is of its ranking within the world’s top 100 universities.

'Its research and innovation lead the way in its field and I have seen today how futuristic research can improve lives and make the UK even more competitive.'

'It is work like this being carried out at Universities across the UK that has cemented R&D at the heart of our modern Industrial Strategy, with the biggest boost to funding in UK history to create high skill jobs and boost productivity across the country.'

Les Misérables has no songs, but the BBC version has a voice of its own