Microaggressions: what are they and how to intervene

By Havi Carel, The University of Bristol's Equality, Diversity and Inclusion Champion and Professor of Philosophy

Havi Carel contributes her thoughts on departmental microaggressions within the University structure for Epigram's #WhatsMicroaggression campaign.

Philosophers are supposed to be concerned about justice and virtue and be alert to their own biases. Although that’s a noble ideal, it’s not reflected in the shape of the discipline. Philosophy, in the past and into its present, has privileged certain groups – white men in particular, as an article in The Guardian discusses. Women’s work, for instance, was judged too ‘touchy-feely’, or ‘not part of the core’. Some openly said that women ‘weren’t as good at philosophy’ or that they weren’t promoted because they ‘wanted to focus on their family’ or ‘weren’t competitive enough’.

This all changed when Jennifer Saul, a Professor of Philosophy at Sheffield University, set up a blog called ‘what is it like to be a woman in philosophy?’(https://beingawomaninphilosophy.wordpress.com/). The blog gave a voice (anonymously) to women who were studying Philosophy or working in a philosophy department as an academic, and the floodgates opened! Thousands of stories – some horrific, some familiar, some pathetic and some criminal – were posted. More continue to pour into the blog.

The blog challenged one fact: that women were expected to put up with the status quo and to accept a host of discriminatory attitudes and behaviours, including sexist comments from colleagues and students, unwanted sexual advances, being overlooked, under-cited and turned down for promotion, or not considered for senior roles, to name a few. In the UK, female philosophy professors made up less than 20% of the professoriate in the discipline. And women routinely felt they had to struggle against biases, stereotypes and ‘chilly climates’ in their department. 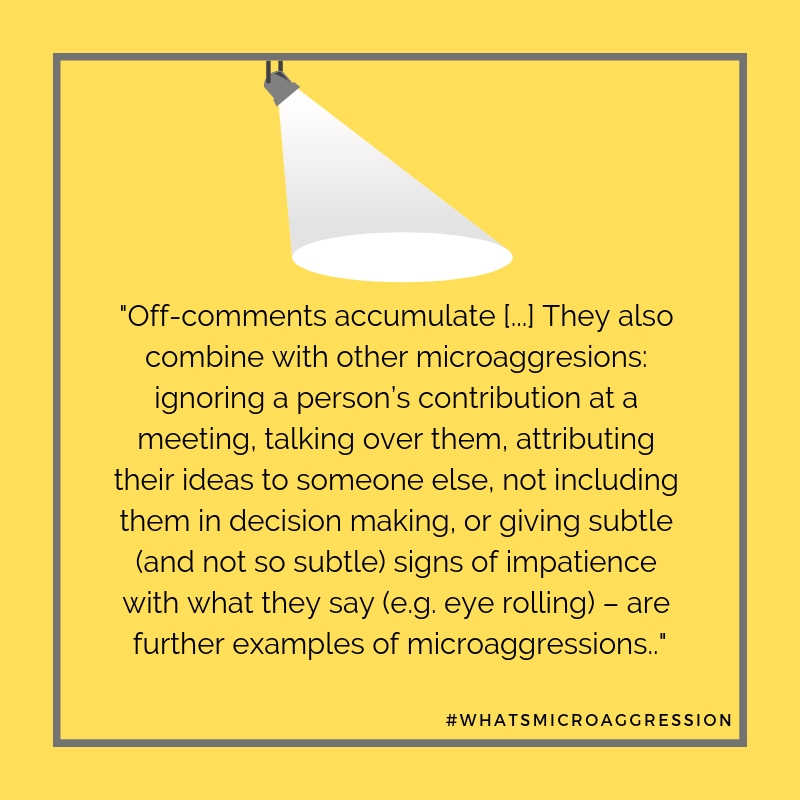 These days, things are moving forward, although much progress is yet to be achieved. The Gendered Conference Campaign made useful suggestions on how to avoid all-male conference line-ups. There’s more awareness of the need to have gender balanced reading lists and seminar speakers, and for more blind-reviewing of academic papers submitted to journals. Many departments have signed up to Best Practice Scheme guidelines developed jointly by the Society for Women in Philosophy and the British Philosophical Association.

But still, there is plenty more work to be done. A large part of the problem are microaggressions – the small, and sometimes imperceptible (for some!) ways in which people can be made to feel unwelcome, embarrassed, self-conscious, or hurt. An off-the-cuff remark about someone’s gender, skin colour, or age that is made in jest, can contribute to a feeling of standing out, not belonging, and feeling self-conscious. A comment like that may turn the department’s climate ‘chilly’ for that person, especially if they are (and they usually are) a minority of some sort in the department.

Microaggressions are, as the name implies, small but cumulative, and as such need to be seen in their cumulative effect. Ordinarily, a single, slightly ‘off’ comment wouldn’t destroy someone’s confidence and sense of belonging. But such comments accumulate. They also combine with other microaggresions: ignoring a person’s contribution at a meeting, talking over them, attributing their ideas to someone else, not including them in decision making, or giving subtle (and not so subtle) signs of impatience with what they say (e.g. eye rolling) – are further examples of microaggressions. When people are treated dismissively over and over again, even if each incident is minor, together they can cause considerable damage. 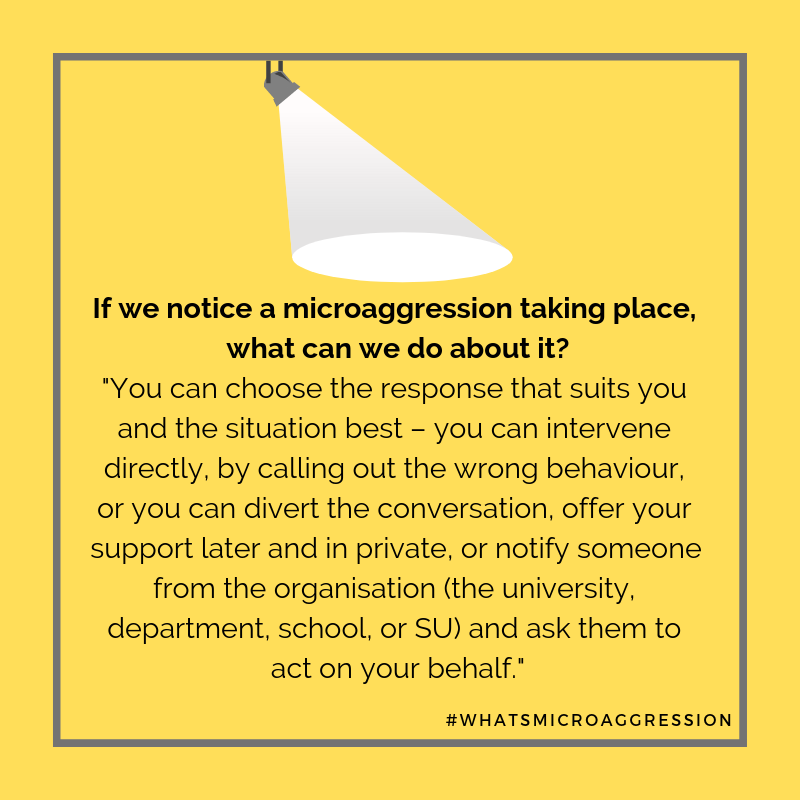 What can we do about microaggressions? We can first of all try to notice them. Some banter, especially in a group context, can make some people feel unwelcome, embarrassed or excluded. Try to think what might make another person feel unwelcome. Are they the only person in the room with a particular attribute? Is the chair of the seminar or meeting sensitive to the imbalances in the room in terms of gender, seniority, race and so on? Do people feel comfortable and able to speak, or are certain people dominating the discussion? Did a particular remark shut someone down, or make them feel uncomfortable? These are some things to think about in any context, from a student tutorial to a senior management meeting.

If we notice a microaggression taking place, what can we do about it? There are many ways to address a microaggression. One is to offer the offended person your support. Knock on their door after the meeting and ask them how it make them feel. Ask them how you can help.

Another way to help is to speak to the offender. Often people offend others, or make them feel uncomfortable, without intending to do so. Are they aware of the effect of their comments or actions? Help them to see how damaging their behaviour was and offer positive ways forward. For example, offer to go with them to the offended person to apologise.

You can also intervene in the moment, if possible. You can divert the conversation or interrupt the speaker, by saying ‘I think this is making some people uncomfortable’. If someone is being spoken over or their opinion dismissed, you can come to their aid by expressing your support, reiterating their point, or asking that it be discussed further. And in some cases, you can ask the offender to stop and offer his/ her apologies, if they said something that was extreme in content or effect. Intervening in the moment is not the only way to help, though, and often people feel flustered and even silenced by the ‘bystander effect’ which inhibits us from intervening in real time.

You can choose the response that suits you and the situation best – you can intervene directly, by calling out the wrong behaviour, or you can divert the conversation, offer your support later and in private, or notify someone from the organisation (the university, department, school, or SU) and ask them to act on your behalf.

Much discrimination and bias are unconscious and unintentional. So are many microaggressions. But that doesn’t mean that we should excuse the behaviours we find damaging, offensive, or exclusionary. There is usually a good way to influence the situation and to make people aware of the offense they cause. Looking for training such as bystander training, which teaches effective intervention strategies, can help you know what to do next time you find yourself witnessing a microaggression. It is our collective responsibility to try and make our campus welcoming to all and respectful of all.