A letter to straight people who want to do better

"But, if you’re going to treat being gay like a topic of conversation, don’t assume we're not in the room." Nura Alyah, Chair of Bristol SU's LGBT+ Network, pens a letter for Epigram's #WhatsMicroaggression campaign

My life at university has seen parties, lectures, and socials, where people talk about being gay like none of us are in the room, and it triggers a very specific type of anxiety that I’ve had since I realised I was bisexual at age 14. It has been conditioned into me, and so many other LGBT people, that someone knowing you’re gay will have you gossiped about, harassed and bullied.

It has been conditioned me into thinking the worst thing about being gay is people knowing.

A lot of people who aren’t LGBT can pinpoint harassment, assault and slurs as “homophobia”, and therefore as “bad”. But it’s far less frequent for them to point out that keeping up a culture that prevents us from being able to say we are queer is an aggression. 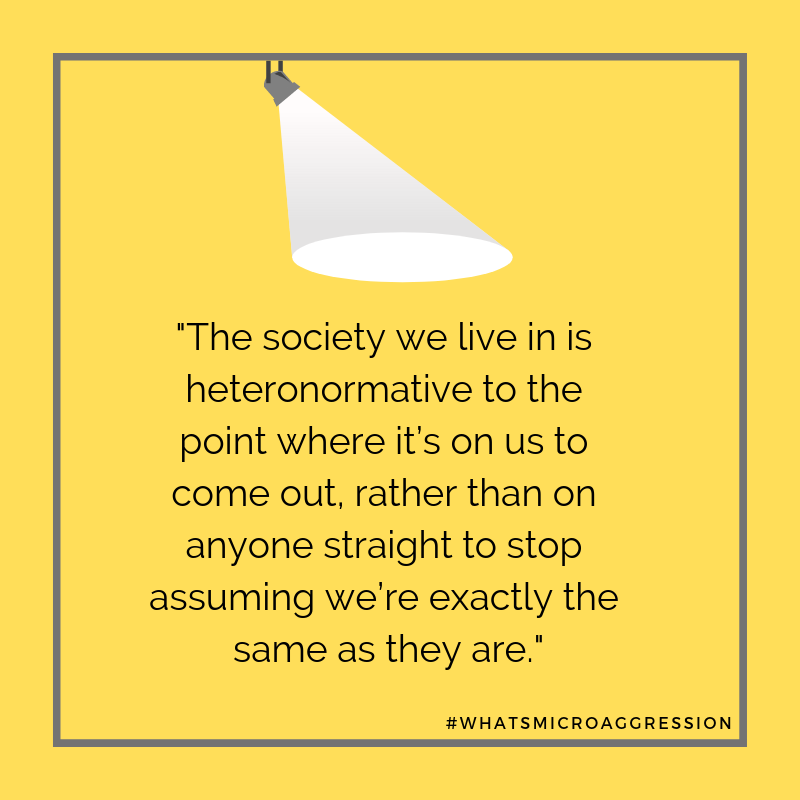 The society we live in is heteronormative to the point where it’s on us to come out, rather than on anyone straight to stop assuming we’re exactly the same as they are. But here we are, still, with straight people making it anything but easy.

I’ve stopped hiding that I’m bi, and I have been pretty damn forthright since I first came to uni, where I jumped in with the LGBT Society and never looked back. But when I go to dance classes with my girlfriend, and she kisses me on the cheek, I get anxious. When I tell people I’m involved in student politics, and they ask what campaigns I’ve run - I hesitate.

I’m writing this up after having had a discussion with one of the editors of the campaign. She asked me what negative impact I associated with microaggressions and, the only thing I could say was, “fear”.

I’m not afraid that I will be a victim of homophobic abuse, but I am afraid of people knowing I’m gay before I know whether they’re going to be shitty about it. I am afraid because not one straight person has made it seem like the anxiety I had at school years ago was unfounded. 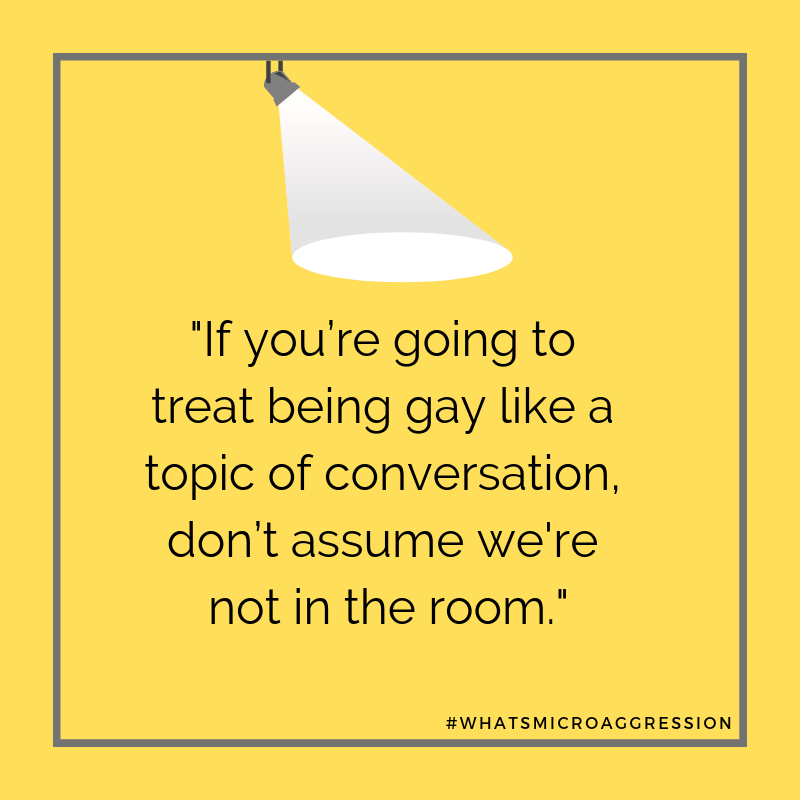 It’s constantly reiterated that being gay is fine when it’s nice and amicable and palatable for straight people. But the second it’s loud and argumentative and actually reflective of the shit we go through - it’s too much, and we need to calm down. And yet, when you’re not fighting this whole assumption, you’re doing us no favours. You are actively reminding us that the only way we will be accepted by the “norm” is if we change ourselves for your benefit.

Maybe you don’t think you’re homophobic, and you’re probably not. In fact, you are almost definitely trying to be supportive of people who are LGBT. Chances are, you’re really just coming from genuine ignorance, and don’t know that you might have said something wrong. This is fine! If you want to learn, please do! We encourage it.

But, if you’re going to treat being gay like a topic of conversation, don’t assume we're not in the room. Don’t assume that you looking at two girls kissing isn’t giving them intense anxiety. And for the love of God, don’t you dare talk about gay people with the desire that we change to fit your preferences.