Freddie Keighley reports on Bristol 2s final BUCS match of the season: a draw with the top team in their division.

Dan Lord equalised in dramatic fashion with the final kick of the game to level what had been a tight encounter between two battling sides featuring no shortage of action.

Southampton went into the match having already won the league and earned promotion to the Western 1A, while mid-table Bristol were playing to avenge their 2-0 loss at Southampton’s Wide Lane Sports Ground earlier this season.

We’re live at Coombe Dingle where the 2s are taking on Southampton 1s in their final league game of the season pic.twitter.com/DMAyEATlKs

The players and the Coombe Dingle faithful were kept waiting in the rain by the referee taking an age to change into his kit, but eventually the game began in a cagey manner.

Lone striker Vincent Onuegbu held the ball up well and looked to feed wide men Will Gale and John Clarke on multiple occasions.

Bristol’s first attempt on goal saw in-form midfielder Matt Hinks play a delightful diagonal ball in behind the Southampton defence to Clarke, but the latter pulled his shot wide.

Gale delivered a cross from the right which was cleared for a corner, but this came to nothing during a period where Southampton grew into the game and began to create the chances you’d expect from a table-topping side.

A good chance for the away team saw a forward release a powerful effort which hit the post and cannoned off goalkeeper Sam Rattigan’s back for a corner. From the set piece a defender headed narrowly wide.

However, Bristol’s defence weathered the storm for the time being, with defenders Sam Dermott and Gabriel Smith tackling well. Shortly after, a Southampton free kick was met at the back post, but again this chance flew wide. 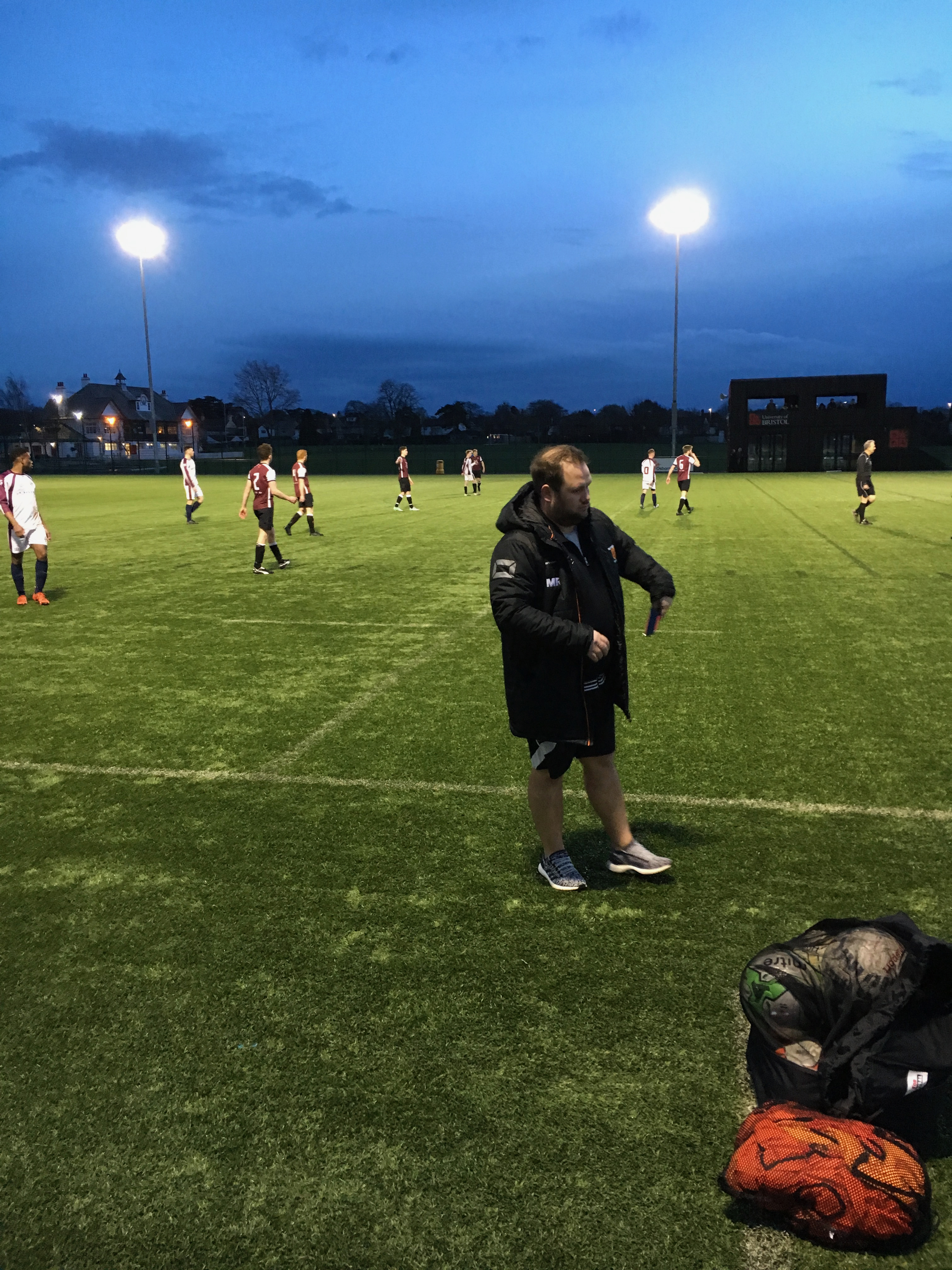 Clarke, playing with great flair on the left wing, delivered a fantastic cross which was almost met by fellow winger Gale, but the home side failed to capitalise on this chance.

At the other end of the pitch, Bristol blocked shots and cleared corners well. However, full back Lord was very unfortunate to concede a penalty for a foul in the box just before half time. Rattigan dived the correct way but there was no stopping the effort from twelve yards which nestled in the topmost of bins.

A half time substitution for Bristol saw Onuegbu replaced by Toby Fuller as the home side looked to switch things up in their search for an equaliser. The first chance of the second half saw Gale fire wide with a volley at the back post after a curling delivery.

Fortunately, Ryan Williams wasn’t hurt after a clash of heads and a brief injury scare, with the centre half fit to continue. A second change for Bristol saw attacking midfielder Cameron Hooley make way for Connor Selwood on the hour mark.

Southampton had the ball in the back of the net after a powerful delivery from the left was met well with a header at the near post, but this was ruled out for offside and the scoreline remained 1-0.

Harlington made an instant impact, taking on and beating two defenders before being hacked down in the box to earn Bristol a penalty.

Harlington made an instant impact, taking on and beating two defenders before being hacked down in the box to earn Bristol a penalty. Fuller aimed for the top right corner, just as the Southampton striker had, finding it with even more power in what was an exquisite penalty to level the scoreline.

Hinks continued to shift the ball with ease as Bristol pushed for a second, while Oli Smiles contributed well in picking up and pinging the ball from the midfield.

Smith, rampaging from left back, earned a free kick in a threatening area, but this was fired into the wall by Harlington. Soon after, Williams saw his header from a corner saved.

A counter-attack saw a Southampton winger carry the ball with a surging run before finding his teammate with an incisive pass; the forward finished with a well-placed effort.

Smiles, in space in the final third, opted to shoot, releasing a venomous effort from thirty yards which cannoned off the crossbar. Selwood poked the ball into the back of the net after it fell to him, but this was ruled out for offside.

A succession of corners for Bristol failed to produce a goal, and it was the away side that took the lead late on. A counter-attack saw a Southampton winger carry the ball with a surging run before finding his teammate with an incisive pass; the forward finished with a well-placed effort.

However, at the death, captain Lord levelled with the final kick of the game. An effort on goal by man of the match Smiles deflected to Lord in the box, the ball was fired over the line and emphatic celebrations followed.

FT: 2-2. Scenes at the full time whistle. Dan Lord earns Bristol a point at the death after a back and forth second half

Bristol 2s end the season in mid-table, but can be happy to have produced a battling performance and to have drawn with a Southampton 1s side which has dominated the Western 2A.

The food that makes us happiest...

The SU election shows that student democracy can be exciting