Scrolling through Instagram’s explore page, the modern day female body ideal is evident: big boobs, big bum, tiny waist. Almost every influential blogger or celebrity (Tammy Hembrow and, of course, the Kardashians) seem to be doing whatever they can to alter their body to fit this type. Gruelling exercise plans, surgery, clever camera angles, photoshop, ‘shape’ enhancing shopping categories, and waist trainers are a few that spiring to mind.

However, whilst having big boobs or a big bum seem to bounce in and out of fashion like a yoyo (if someone had answered ‘yes’ to ‘does my bum look big in this?’ in 2007 it would have ended in tears), there is one ideal that remains permanently in style: the svelte and skinny waist.

For century’s female beauty has centred on the slim waist, revolutionised by the creation of the corset; an apparatus specifically designed to cinch the body inwards at the ribs to accentuate the bust and hips. Many women would desire to shave their waist down to the size of a circle you can make with your hands; the present world record stands at a minuscule fifteen inches in circumference.

But the corset is not just literally oppressive in its restriction of the rib cage and vital organs, but is tightly bound (pun intended) with female oppression in patriarchal society. Throughout history, the corset has been a means for exploitation of female sexuality and the female body; in past centuries, corsets held a mandatory place in the female closet. Corsets were a symbol of literally restricting women to the domestic sphere; with such uncomfortable and immobilising attire it was impossible for women to engage in sports or other activities that were deemed too active for the passive, corseted woman. 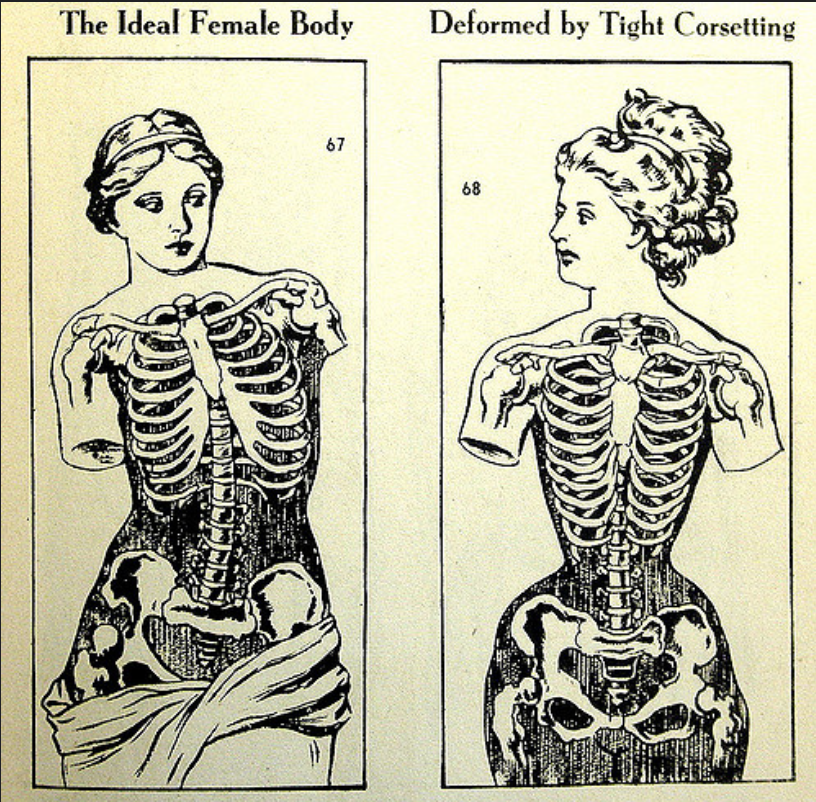 With female emancipation and changing body ideals came a changing shape to the corset, but it was yet to be eradicated completely from women’s sartorial options. The curved bust of the Victorian era, that was recognised as damaging to female health, was traded for an S-shaped bodice, followed by Dior’s ‘waspie’ style, until the corset finally fell out of fashion.

The 1980’s saw the resurgence of the corset, but with new significance. Madonna’s appearances in Jean Paul Gaultier’s high fashion bodices and Vivienne Westwood’s underwear as outerwear designs turned the corset in to a symbol of female liberation rather than oppression. Whilst the corset undeniably still connoted female sexuality, its cementing in to pop-culture rather than patriarchal ideology allowed women to claim the corset as their own; rather that it being an obligatory aspect of dress, it became a means to express sexuality by choice and regain control over female objectification.

However, whilst the modern day use of the corset can be seen as both empowering and stylish, often frequenting the runways at fashion week, is the history of the corset too damning to ever be considered truly liberating?

Laced and bound with both oppression and beauty, the corset has undoubtably had a prevalent impact on the beauty ideals we hold today; whilst the corset is no longer mandatory, women still strive to achieve its effect. As evidenced by who we like and follow on Instagram and the extreme lengths people will go to achieve a slim waist, or the appearance of such, the ideals that were undoubtedly fuelled by the corset have become internalised in our everyday life.

Do we idolise the slim waist because we think it is personally empowering and attractive, or, have we just been indoctrinated by patriarchal ideals of the female body to think as much? The corset, and what it symbolises, has undoubtably in some way, shape, or form, cast a shadow over the beauty and body ideals of today.

It is perfectly fair enough to desire a skinny waist- but the question we must ask ourselves is why? Is a slim waist empowering or are we just restricting ourselves, like women before us, to an invisible corset?

From the archives: 'Playboys and girls'