Olisa Odukwe: Remembering the late Bristol student, one year on

‘Olisa was literally one of the best human beings I knew,’ Nathan Azille tells me.

Nathan was a close friend of Olisa Odukwe, having grown up and attended school together back home in Tunbridge Wells, Kent. Olisa was a bright student and began studying Mechanical Engineering at Bristol in 2019, living in Redland. He was also an avid sportsperson; a Chelsea fan, he regularly played basketball and football, for which he was in the university club. His strength in sport, will of perseverance and core athleticism stood out.

‘He was always so kind, caring, unjudging, uplifting, motivating and inspiring,’ says Nathan. ‘He loved to laugh, and we did a lot of that together. During our A-Levels, we shared Maths and Physics together so I spent a lot of time with him, and he would help me whenever I required assistance, he would go out his way to help me understand things that I just couldn’t wrap my head around.

‘That was Olisa in a nutshell: going out his own way to help others. But then working extremely hard on himself too. The discipline he had was unmatched, he never touched alcohol or ate anything unhealthy, his body was temple. Olisa was up at 4am to hit the gym, then full day at school, working overtime, into break times and lunch times, he was a machine. He wouldn’t put something down until he fully understood exactly how it worked and then attacked it more, to fully consolidate his newly acquired knowledge. It was amazing to witness, my other friends and I had no idea how he managed to be that great. But he understood something very early on, that nothing came easy. Embodying
this belief, he would just grind at everything, in all areas of his life day in day out.’

But in his second year of university, tragedy struck.

In May 2021, Olisa tragically passed away aged just 20. His death shocked the university community, who had come together in strength and solidarity to raise awareness of his disappearance, then ultimately mourn a fellow student taken far too soon. It affected everyone, from friends and family of Olisa himself, to students who did and did not know him personally. There was attention from local and national media, social media pages and even professional footballers paying tribute to him. Everyone was touched by
Olisa’s passing.

Nathan recalls how it all unfolded, from the initial concerns to the moment he found out what had happened.

‘On 1 st May last year I got a message from his girlfriend (they both attended Bristol University) saying, “Have you heard from Olisa today? I’m not sure where he is.” I replied, “No sorry, I don’t” - not thinking too deeply about it,’ Nathan explains.

‘I messaged him straight after asking if he was okay. On the morning of the 2nd, I messaged his girlfriend asking if she heard anything from him. Still nothing. The police had been contacted, and we were trying to figure out where he had gone, calling hospitals, nearby places, speaking to relatives- still nothing. So, on the 3 rd I decided to drive up to Bristol in the evening. I got there around 8pm, and that was the first time I had met his girlfriend. She then filled me in with what she had figured out so far. That night, we drove around to places where we thought he would be hiding. We trekked through the forest at night pitch-black, shouting out his name, rain coming down and using our phones as torches, but after a while we had to give in.

‘But we didn’t give up hope, we believed we were going to find him, and I was already imagining what I would say to him when I would see him next. Little did we know what the actual story was. On 4th May, we were back at the house, and the police had arrived to let us know what had happened. The pain was unlike any other, the house was just full of crying and disbelief from friends and family.

‘It was then my job to call up my friends from back home, that had been worrying sick, to tell them that the worst had happened. Hearing that news was like a dagger driven into your heart, I saw and felt the pain of my friends and in my family too. It was truly the worst day of a lot of people’s lives. On 28th May, my friends and I had to attend the funeral of a one of our best mates, something we never imagined we’d have to do at the age of 20 – 89, yeah sure, but 20! Nothing made sense.’

The thought of having to bury one of your best friends at such a young age is harrowing. Olisa had so much ahead of him and had only just begun adulthood, yet that was cruelly taken away from him. Sadly, it is a story far too common among young people today, and especially at Bristol, where student wellbeing is one of the most potent issues faced. As Epigram has previously investigated, the issue of student suicide and mental health is particularly concerning at the university and for its students, moreso than at other universities across the country.

But in the face of sorrow and adversity, Nathan and other friends were determined to keep Olisa’s legacy alive and share his story. This has been done through multiple means, including a podcast.

‘After everything, I decided to create the Purple Heart Podcast,’ Nathan says. ‘The idea was to create a place where people could feel comfortable to talk about their issues, and encourage others that you don’t have to keep everything bottled up inside all the time. It’s okay to let it out occasionally, we need to. So that was the main aim. It was a sort of duty I felt like I had to carry out. I couldn’t have done nothing. I tried to turn my pain into something that can be used for good. I also kept him alive in the memories of the people who watched and engaged.’

The Purple Heart Podcast was created just weeks after Olisa’s death, with the first episode with mental health activist Ben West published in June 2021. The name comes from the song Purple Heart by rapper Dave – one of Olisa’s favourite artists – as well as having a deeper meaning, as Nathan explains: ‘That song played on my drive back when I found out the news and it resonated with me.’ It also serves as a symbol of a bruised heart due to the loss of a loved one, and one of bravery. The podcast aims to start a conversation about mental health, setting the groundwork for it and encouraging people to speak out about their struggles. The first season concluded at the end of the year, with season two currently being planned.

Nathan continues: ‘This led to making some hoodies with a “purple heart” emblem, which we sold to raise money for the charity CALM [Campaign Against Living Miserably]. I was also given the opportunity to give away a holiday, where people had to donate to have the chance of winning, and all donations went to the charity Young Minds.’

The podcast has been a widespread success, and is one of many ways Olisa’s legacy has been continued.

In sport, a football club called Odukwe FC was founded back in his hometown in Kent. Bristol also saw its own sporting tribute, as The Olisa Odukwe Tournament was held on 1st May – the one-year anniversary of Olisa’s death – at the Lockleaze Sports Centre. Sixteen teams entered the inaugural competition, coming together to raise an impressive £777.95 for mental health charity Mind. The tournament will return as an annual event in May 2023, continuing Olisa’s memory through sport.

It is touching to see the effort and determination to maintain the legacy of Olisa, serving as a reminder of how many people cared for him. Whether it was through his passion for football leading to the sporting community playing in his memory, or the podcast which is dedicated to him and tasked with encouraging the conversation surrounding mental health, Olisa’s legacy has well and truly succeeded in remembering him.

Perhaps the most poignant tribute to Olisa comes at The Star and Garter pub in
Montpelier, where a mural was painted in his honour. Its vibrancy and splendour epitomises who Olisa was, a beautiful reminder of the man he was and what he meant to people.

‘Everyone has used their unique skills to help preserve Olisa’s memory and they keep him alive,’ Nathan tells me. ‘We will never forget him and never stop loving him. He was the best of us, and we miss him dearly.’

If you are concerned about someone, or need help yourself, please contact the Samaritans on 116 123. 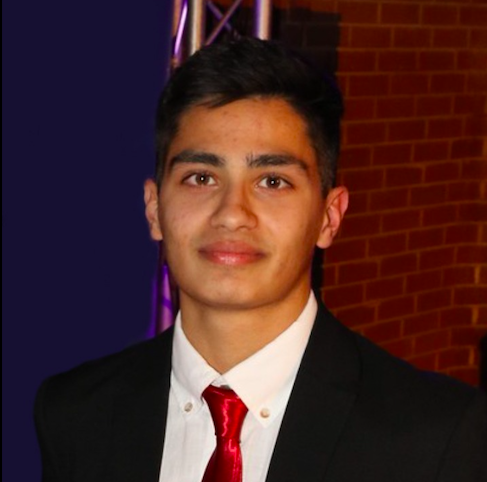 Conversations with Friends is a beautiful yet frustratingly emotionless affair