Everyone has that artist that they recently discovered and can't stop listening to. For me that was JGrrey, in the haze of summer I stumbled across her song 'Don't Fade' on Spotify. I won't compare her to other artists though, her style is different and that feels like an injustice to her originality.

At twenty-five JGrrey has had some pretty significant achievements more recently joining Billie Eilish on her world tour. JGrrey's most recent tour that I attended in Bristol showcased her latest album Ugh but also featured classics like 'Pretty Insane' and 'Better Off'. Such songs were performed with a subtle humour with fans heartily singing the lyrics back. There was plenty of banter present and it felt like we were all part of one community. Her music deals with lots of topics with 'Better Off' highlighting issues with old flames with  lyrics like "we could never be friends, just leave it alone". As you sing along you realise how relatable these issues are and how perfect music is for expressing those emotions. This is something she emphasised when she said she was so grateful for music, for offering her this platform.

As you sing along you realise how relatable these issues are and how perfect music is for expressing those emotions.

The platform that music has given her is what we all indulged in over the space over the hour long gig. An hour for me to let myself go and bathe in the chilled energy her music radiates- even though the venue was small JGrrey is still very much on the rise and her fan base is incredibly loyal. For me this is the benefit of smaller concerts, you get a proper feel for the people who share the same music taste as you. The diversity was evident with fans that were younger and older than me as well as from different cultural backgrounds. JGrrey is versatile and is easily accessible but she achieves this without steering away from her slightly rebellious edgy personality.

JGrrey is versatile and is easily accessible but she achieves this without steering away from her slightly rebellious edgy personality.

Despite having this edge she's still incredibly grounded and relaxed, she even held an improv jazz session whilst waiting for whiskey shots from the bar. Her approachability was of course aided by the venue being incredibly intimate, however, even on social media she's still able to relate to fans and has even responded to me when I shamelessly slide into her Insta DMs.

Whatever your music taste you should make room for JGrrey on Spotify. Her music is already receiving much more attention and I have no doubt she will continue to gain greater status.

Did you see JGrrey at Rough Trade or just really rate her music? Comment below 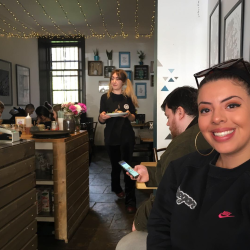 Your guide to the election issues for students