The Favourite features three actresses on top of their game

Last Sunday Regina King, accepting the Golden Globe for 'Best Supporting Actress in a Motion Picture', publicly vowed to work solely on projects made up of at least 50 per cent women. Indeed, in a year which has revived the label ‘Year of the Woman’, it seems there’s more pressure than ever on Hollywood for representation in its biggest films. This trend is perhaps most striking in Ocean’s Eight (2018), a film which was self-consciously about ‘girl-power’ and a smash-hit at the box office.

Whilst these films are important and necessary, never mind entertaining, Yorgos Lanthimos’ biting comedy The Favourite - led by three formidable actresses - doesn’t go out of its way to make a feminist statement. The fact that an 18th century court, and therefore England, is ruled on the whims or plotting of three women is not conspicuous or notable. In the scheme of the film it is quite natural and the ability of women to rule, however absurdly, is normalized. The Favourite is un-showy in its feminism, and perhaps all the more powerful for it.

Set in the court of Queen Anne (Olivia Colman) during a war with France, the film follows the farcical attempts of those who wish to gain her favour. The designs of the men in parliament – brought to life by some very amusing performances by Nicholas Hoult and James Smith – are not ignored, but with their ridiculous wigs, makeup and courtly pastimes, they’re certainly sidelined. The action pivots on the tripod of the Queen, her trusted advisor (read: master) and childhood friend (read: lover) Lady Marlborough (Rachel Weisz), and the disgraced Abigail Hill (Emma Stone), who eventually, and with serious daring, usurps Marlborough for the number one spot in the Queen’s affections.

This favour not only entails luxurious perks, but also control over the Privy Purse, and, because the Queen seems flummoxed by matters of state, an enormous degree of political power. However, Abigail doesn’t just climb her way to the top with scheming and tricks. She also offers herself as a sexual alternative to the Queen’s lifelong (somewhat loving) affair with Marlborough. And the mysterious final scene perhaps suggests that sexual gratification, performed as a begrudging service, will now form a large part of her role. 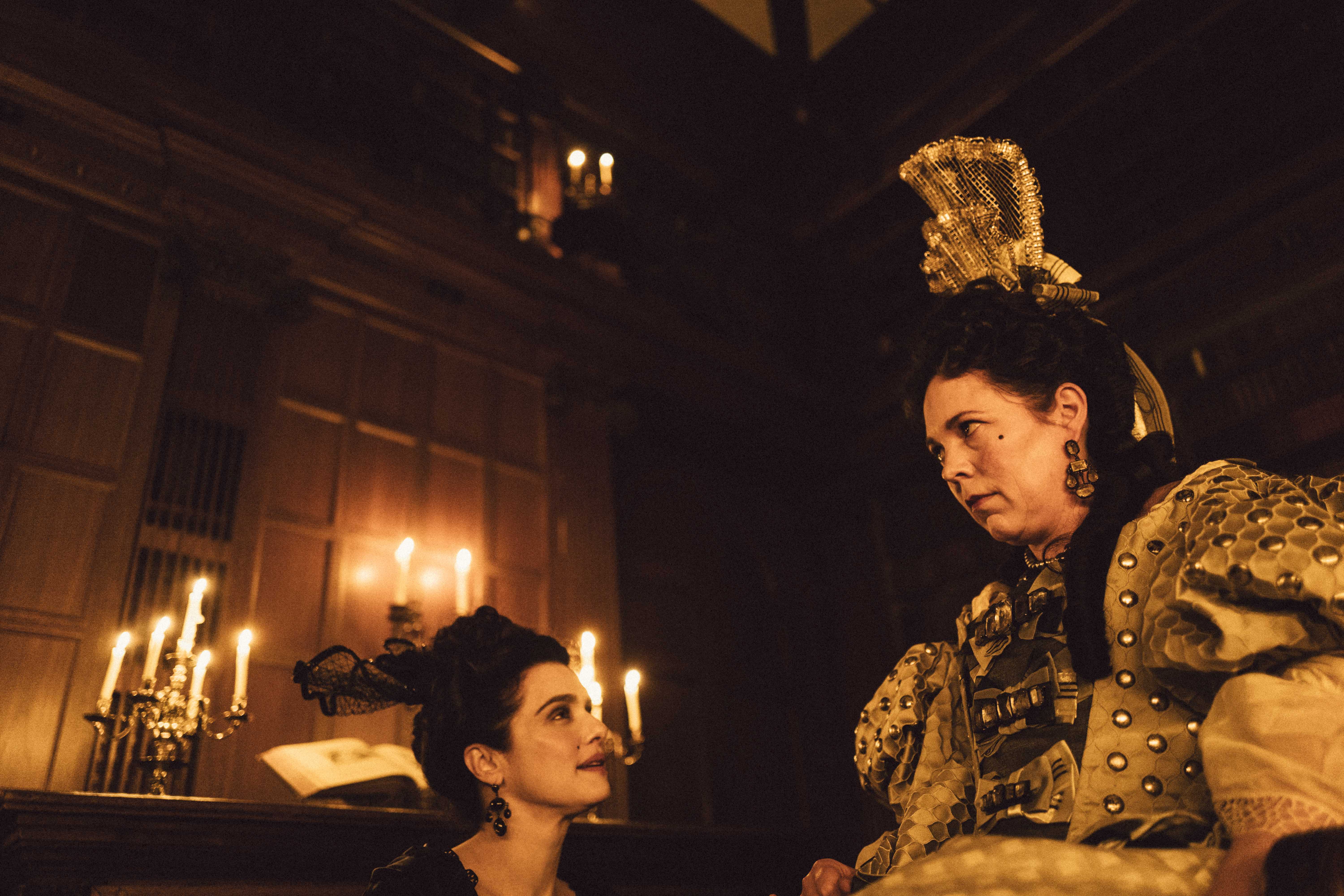 The Favourite’s three lead performances rival one another in their brilliance. Framed by Lanthimos’ fish-eye lenses and unexpected angles, their expressions, their screams, their sarcastic scoffs charge the film with a powerful electricity. Colman is rightfully in the running for an Oscar for her performance, but Weisz and Stone are not to be ignored. They are both delightfully sharp and fleet-footed as they outmanoeuvre both their male rivals and, more importantly, each other. The Queen is at the centre, and her emotion – ridiculous or sincere – structures the film, but it seems impossible to pit these actresses against one another. With each hilarious turn, a new winner comes out on top. It’s rare to walk out of a film so indecisive about your own ‘favourite’.

Whilst the film is raucous, laugh-out-loud funny, and as absurd as one might expect from Lanthimos’ previous works, it is not without depth. Perhaps what makes Colman’s performance stand slightly above the rest is her ability to move easily between child-like tempers, playful flirtation, and profound grief. Her rabbits, seventeen in number and often covering her royal bedroom floor, were each bought in place of the children she lost, either at birth or in their youth - divulging a pathos to match the film’s most hysterical moments. Lanthimos’ tight directorial control holds these two contrasting tones in balance, so that Anne’s unimaginable suffering does not overwhelm the comedy of the film, but adds a meaningful dimension to her petulant outbursts.

In The Favourite, as in his previous English language films, The Lobster (2015) and The Killing of a Sacred Deer (2017), Lanthimos achieves an impressively bizarre atmosphere. But his most recent work seems different in a couple of important ways. Most notably, his usually dark, uncomfortable and ‘should-I-really-be-laughing?’ humour has morphed into the truly riotous and hilarious. Furthermore, from the tragic symbolism of the rabbits to Lady Marlborough’s sincere plea that real love is brutally honest, The Favourite has some heart behind the laughs. As in The Lobster and Sacred Deer, Lanthimos’ characters are left stranded in isolated and testing circumstances, but the court of the Queen feels much more playground than petri-dish. Though still snarky, cynical and perhaps ultimately nihilistic, The Favourite is less clinical than his prior work and captures a much more raw human emotion.

Whether better or worse than his previous films seems beside the point: it’s great to see Lanthimos engage with this new material. He, and writers Deborah Davis and Tony McNamara, turn the usually stuffy period drama on its head. Making optimal use of a sweary and incisive script, and an off-key and powerful score, Lanthimos delights in making his audience uneasy. He masterfully sets the stage for his three leads who, for me, steal the show – and appear to be having a lot of fun whilst doing it.

One is inclined to ask oneself, what more could one ask for?

The Favourite is showing at Watershed until January 17

What was your verdict of The Favourite?

Bristol revealed to be fifth most healthy university