Widows is so much more than a heist movie

The stellar cast of character actors in the film are guided by Steve McQueen and Gillian Flynn to portray the social oppressions of contemporary America.

Widows is not just a heist film, it’s a film showing how oppression affects all women of different backgrounds. The acting and direction is captivating and explores the challenging scenes of Chicago’s brutality. Three grieving women are forced to come together after their criminal husbands or lovers die, needing to repay Jamal (Brian Tyree Henry), a budding political candidate, his stolen money in order to fully move on with their lives.

The acting is phenomenal and Viola Davis dominates the film - as she usually does - in her role as Veronica. She plays a familiar, strong, black, female character, but Veronica feels slightly different. There is a greater development of conflict within her persona; she lives a comfortable life, but is distant from Linda (Michelle Rodriguez) and Alice (Elizabeth Debicki), who come from different backgrounds.

Evidently, a crucial character arc is Veronica’s struggle to grieve her husband and her past. Her bluntness is relatable, as she understands the need to maintain herself. She becomes the ringleader and recruiter, taking her husband’s place, and exerts a new authority which didn’t exist in her previous relationship. Her character is similar to hers in How To Get Away With Murder (2014-), but much more of a realisation that Veronica was never a housewife.

Filmmaker Steve McQueen uses each moment to build a momentum and create a chilling atmosphere. McQueen’s interpretation is the reality of Chicago as a dangerous city, and, within the setting, the intensity of the character’s motive becomes apparent. The perspective of the camera forces the audience to either walk, run or simply watch the character carry out their plans. 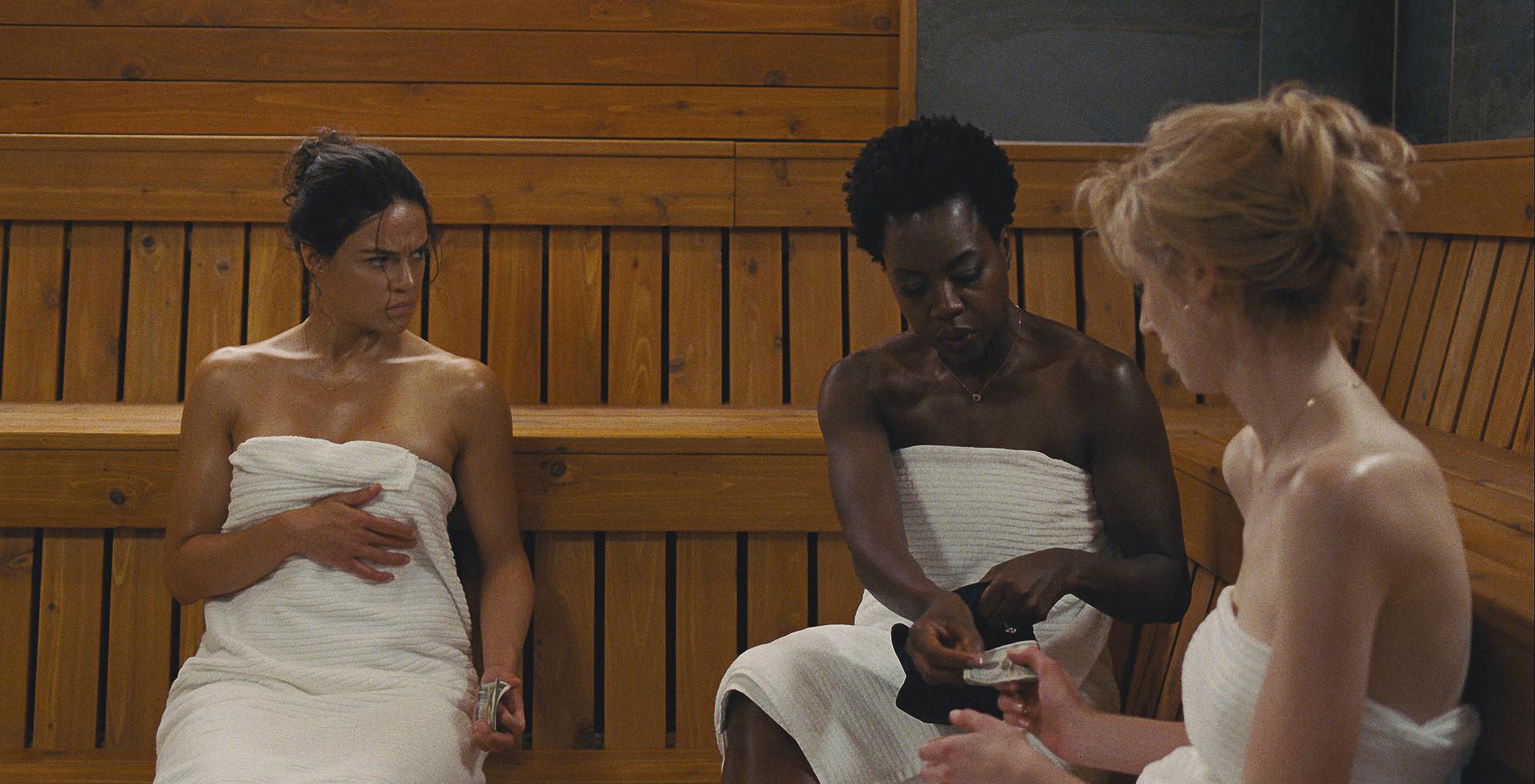 Clearly both writers, Gillian Flynn and Steve McQueen, alude the painful struggles of these women to recent, real world events. The links to the #MeToo campaign are evident, but also the aggression of both women and men when their views are not heard regarding the sexist oppression. The three women represent the comfortable, the abused, and the struggling respectively - all characteristics generalised in the media.

Viola Davis recently commented that the issue with the #MeToo campaign was that it misses the disenfranchised, and should focus not only on Hollywood cases, but also the everyday male attackers who still get to carry on with their lives and the regular women who suffer. The film is a further discussion of how often men abusing their power - physically and emotionally - towards women, through the art of manipulation. In the film, the character of Alice faces this type of abuse the most.

Due to this, each male character in Widows is an antagonist. Every politician, every husband and boyfriend are the unreliable character. The women must rely on themselves or other women in order to move on. Therefore, self-discovery is the one of the dominant themes in this film.

Widows also deals with how capitalism in America actively works against politicians. Each character has a certain privilege and race is a strong factor. Jamal, who is demanding repayment from Veronica, wants to enter politics for a ‘new life’, to beat the institution. Yet, from illegal ends, he orders the women to pay back two million dollars.

The film highlights the ways men rely on women to be productive, and how women’s comfort zones can oppress their needs and mean they forget their power. The premise is reminiscent of Flynn’s previous work, Gone Girl (2014), where even the housewife has her own incredible power.

Everyone breaks the type cast. Michelle Rodriguez’s character Linda own a dress shop and has a particularly emotional scene in the film. She doesn’t play the tough lady but a woman still struggling to deal with her husband’s death, the love of her store and her children.

The scene-stealer is Daniel Kaluuya as Jatemme, a cynical mob enforcer,. His presence from the beginning, is terrifying and uncomfortable to watch. Each of his scenes elaborates on not only the universally hated villain, but also the violence of Chicago itself. Along with his brother, Jamal, the two characters embody how racial oppression in America has caused them to be who they are.

Widows is more than it markets itself to be. Steven McQueen has not done a film like this before and it describes how women self-discover the powers they have against men. With a screenplay by Gillian Flynn, it is easy forget the film is supposedly a heist. The metaphorical message is that disenfranchised women’s voices do not go unheard.

Widows is showing at Watershed until Thursday November 29.

Do you think Widows proves film has the ability to empower oppressed groups in society?

Are slow cookers really worth it?