Does a lack of diversity create an elitist culture at Bristol University?

It’s no secret that Bristol has some of the poorest admission statistics for social inclusion in the UK; ranking 5th from bottom in the 2019 Times University Guide. 49.6 per cent of students come from private or grammar schools and just 16 per cent are from ethnic minority groups. When compared with the general population; in which 7 per cent attend private schools, and 26 per cent of all undergraduates are ethnic minorities, it’s no wonder there are concerns over how elitist the societal culture of the student body is.

Broadly, elitism is defined as ‘the dominance of a society by an elite’, with the elite being ‘a group or class of people seen as having the most power or influence in society’. These statistics may represent how those who are typically considered ‘elite’ - white, upper-middle class - make up a disproportionate percentage of the student body. But what does this suggest about the dominant culture of the University? 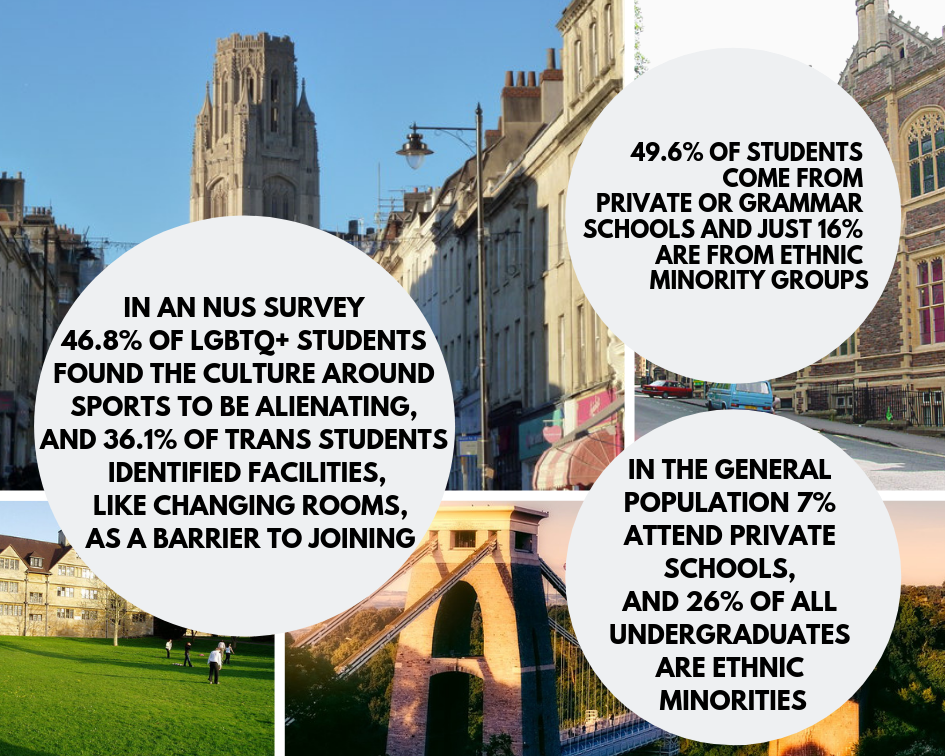 'The Tatler guide to Bristol University recommends that first-year students should live in ‘chilled-out Churchill’, which is ‘like boarding school’, or ‘trendy Badock’, which houses ‘the hardcore party boys from Marlborough … with their jumpers from Peru’.'

Engaging in the everyday social life of Bristol proves to be a similar challenge, especially when getting involved in some of the more prestigious sports teams. For instance, annual membership for UBRFC costs £200. Meanwhile, membership to the men’s football team - traditionally a working-class sport - would set you back £155. However, Bristol SU run an ‘Activity Hardship Fund’: granting up to £100 a year to students who otherwise wouldn’t be able to participate. Even though this may not completely cover the cost of membership for the previously mentioned clubs, it does cover more accessible clubs, such as Athletics & Cross Country which costs £55, and Basketball which costs £70.

'annual membership for UBRFC costs £200. Meanwhile, membership to the men’s football team - traditionally a working-class sport - would set you back £155.'

Moreover, Hillary Gyebi-Ababio, Chair of the Widening Participation Network, highlights the likelihood that a large proportion of Bristol students will have encountered little diversity throughout their schooling; meaning the dominant culture they create on campus may not be as conscious and respectful as it would be if student society in general was more pluralist. This means having more students from minorities, whether that’s ethnic, cultural, or religious, all contributing their first-hand experiences.

However, this change shouldn’t be artificial. Perhaps if societies and broader initiatives like Black History Month which encourage other students to educate themselves on minority issues gained more publicity, the image of Bristol may shift from ‘elitist’ to ‘inclusive’, attracting a more diverse set of applicants. Currently, BME students tend to be more open about their experiences within societies representing the group they feel most welcome in, such as the University of Bristol African Caribbean Society, which Hillary Gyebi-Ababio has also been involved with. Ultimately, it’s student-led initiatives such as Black History Month which are the driving force behind opening discussion about these issues; both to members and non-members of said minorities.

'Ultimately, it’s student-led initiatives such as Black History Month which are the driving force behind opening discussion about these issues'

Due to there being no significant difference in academic attainment, admission statistics don’t highlight another dimension of potential elitism at University: heteronormativity. A study by NUS found that 46.8 per cent of LGBTQ+ students found the culture around sports to be alienating. Chair of the LGBT+ Network, Nura Alyah drew attention to the idea that this could include hypermasculine ‘lad culture’ with nights out revolving around attracting the opposite sex. Furthermore, 36.1 per cent of trans students identified facilities, like open changing rooms, as a barrier to joining.

'46.8 per cent of LGBTQ+ students found the culture around sports to be alienating... this could include hypermasculine ‘lad culture’ with nights out revolving around attracting the opposite sex.'

Another factor suggested by Nura Alyah was the lack of clarity in the case of gendered teams, regarding whether a trans or non-binary person is eligible to compete on a gendered team. Often, this is decided by the NGB of the sport. For instance, England Netball states that a trans woman can compete ‘by providing evidence that her hormone therapy has brought her blood-measured testosterone levels within the range of her affirmed gender’. This is especially unlikely among students given the financial burden of hormone therapy.

Nonetheless, many trans/non-binary students are equally as involved in sports teams as their cis peers: especially mixed teams. 41.9 percent of respondents in the NUS survey attributed negative experiences in their previous schools as a barrier to feeling welcome. The same document, which sets out the policy for competing in women’s teams, also emphasises a ‘zero tolerance approach to transphobia’. Ginny Troughton, Sport and Student Development Officer, has identified this as a conversation that needs to be expanded on; suggesting that the SU is pushing for more equality and opportunities within this facet of student life too.

'is a change in the demographics of the student population integral for this to happen from the bottom-up?'

Currently, it appears to be vocal students and the SU, independent from the University, who are casting light on the issue of elitism and improving inclusivity within the student body. But can the university do more to push this agenda? And even if it did, would it simply expect the student body, as it stands, to fall into place? Or is a change in the demographics of the student population integral for this to happen from the bottom-up?