The ups and downs of communal living

Zosia shares with Living the realities of communal living. Will you be sad to move out of halls/ your shared student home or are you secretly thrilled to escape the chaos?

Thinking about how to write this article made me really scared. I found myself staring at a blank page and having no idea what to start with. Should express my REAL opinion on living in a student house and risk saying something that would offend my housemates and have to deal with reproachful looks for another 3 months? Or instead, should I present a slightly modified version to please everyone around?

Luckily, one of my housemates came to my rescue, as we were walking together to do some work in the SU (her – proper uni work, me – writing this article). She said: “write what you really think. If you don’t know how to start, say how people react when you say you live in a house of 9 girls”.

It is true that people generally react with mild to moderate panic when I tell them I live with 8 other people, all of them being females. It sounds like a chaotic nightmare and I have to say that I would never have pictured myself living in such a huge house. I am (generally) not a shy person and I think I am fairly sociable, but in any place I live, having some space for myself and my own thoughts is one of the most important things. Therefore, before moving in, I was a bit afraid of how it was all going to work. Would I be able to find that little bit of personal space that is essential to my wellbeing or rather, would feel suffocated and lost amongst such a crowd of people?

One of the downsides of living in such a big house is definitely that it can get very crowded – especially, if a couple of us has friends over at the same time. Very often, when I feel really tired and I just can’t deal with such an amount of people around, I sneak in out of the kitchen with my food to eat it in the quiet of my own room and avoid talking to anyone. Antisocial behaviour? Nope, just sometimes necessary not to go insane!

Another downside, I would say, is a constant mess. It seems to appear out of nowhere within minutes. Even though we have rota of what jobs need doing each week - and people assigned to those jobs – most of them don’t ever get done (I won’t lie, I am not the best in keeping up with them myself). This is probably the case in most student houses, but in very big ones it just becomes harder to coordinate and motivate people to do their jobs.
Most of my housemates are also quite into clubbing and all that stuff, whereas I prefer a quiet night in with a book or Netflix or going to see a play. So because of those differences in what we like to do in our spare time, it becomes difficult to bond and become close, as I’ve always imagined I would if I lived in the same house with anyone. We’ve been trying to organise a dinner/ movie night for some time now, with an intention of everyone bonding properly, but it’s just been so difficult to find a date that would suit all 9 of us.

Next year, I am going to live in a much smaller house of 4 people, 2 girls and 2 boys. On one hand, I am looking forward to be in a smaller place because it will probably be a lot easier to manage and keep up with everyone’s lives, but on the other hand I have to admit, in some ways I’ll miss this chaotic, big house above Spoons. Whenever lonely, I can just come downstairs and there is almost always someone there, ready to chat – even if just about what we did on that day. Or just sit down and watch some telly – even if it’s reality TV, which I am not a fan of but some of my housemates thoroughly enjoy. 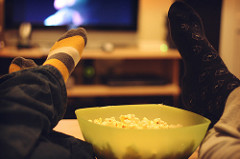 Good news is that finally, we managed to find a time that works for everyone and we are all going to Cori Tap to bond next week – for the first time properly.

What do you think about communal living? Get in touch!

‘The premise is to provide travellers with the information they need’: the lockdown travel guide created by a Bristol student

UoB to introduce ‘living circles’ for first years in accommodation