Histories of Bristol: Castle Park during the 'Bristol Blitz'

Walking in Castle Park, with St Peter’s church standing majestically in front of you, it’s easy to forget the rich history that lies behind its bruised and battered stone walls. David Thirkland explores the history of Bristol during the 'Bristol Blitz' which destroyed much of Bristol's historic buildings. The survival of Castle Park has become a beacon of resilience.

Between the First and Second World Wars, the park was home to one of the best shopping centres in Britain and its buildings were renowned for their aesthetic beauty. Amongst these, a beautiful black and white half-timbered building which stood on the corner of High Street and Wine Street, named Dutch House, has now all but disappeared completely, replaced by a link-road connecting Broad Street to the dual carriageway. It was one of many of buildings destroyed by the “Bristol Blitz”, a component of the Battle of Britain, the latter of which persisted until the spring of 1941. 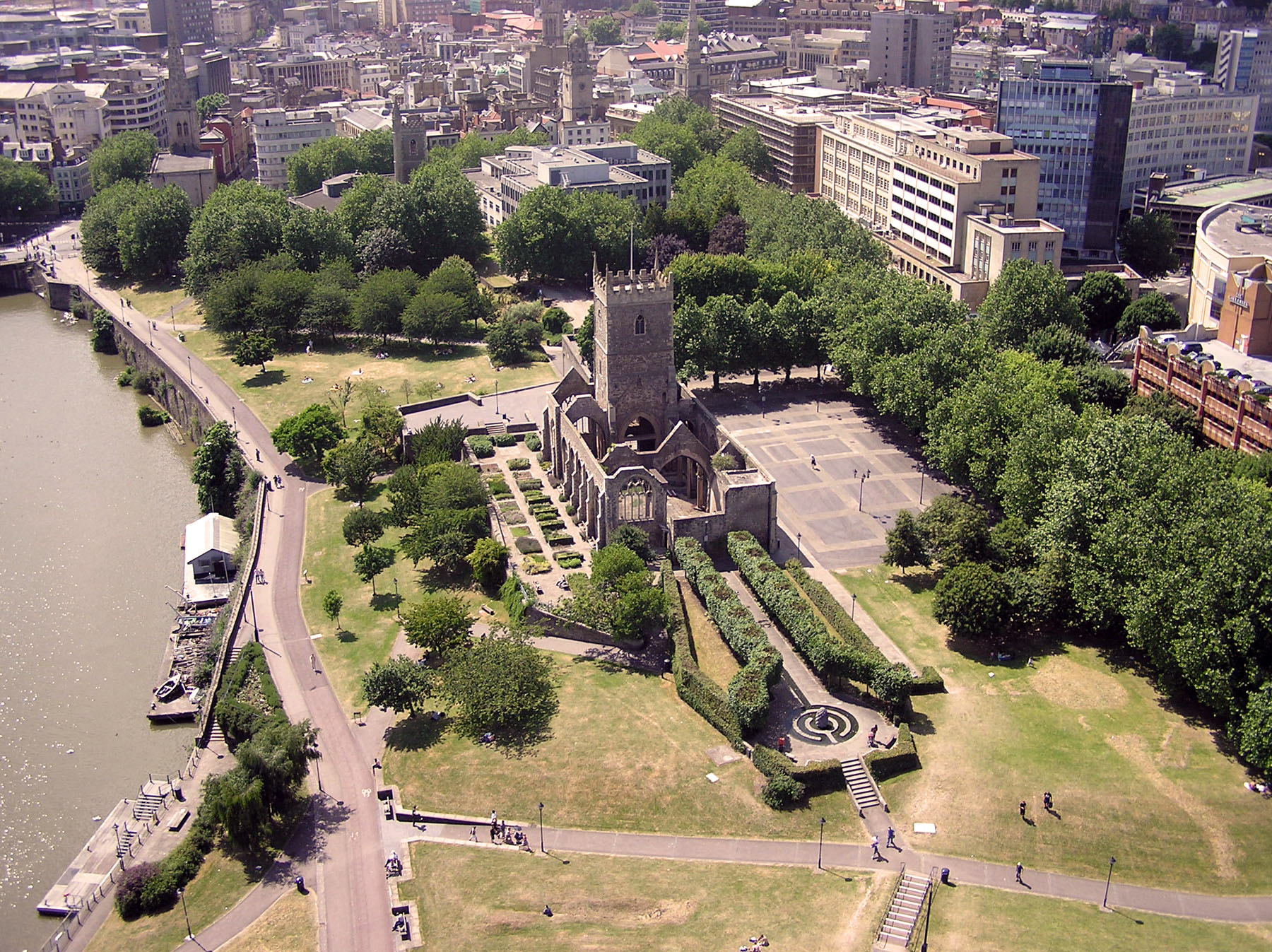 A recent BBC documentary series in 2018 reflects on this event in Bristol’s history in a portrait of our maritime city at one of its most testing moments. It reveals images that contribute to our understanding of the bombing that took place amidst the Second World War, and is worth a watch for any who haven’t seen it.The Blitz was a German bombing campaign against Britain between 1940 and 1941, the term meaning “lightning” in German. Yet, the reality of the Blitz was far more dangerous than the average lightning strike. In Bristol the bombing began on November the 24th 1940 when the deadly impact of an incendiary bomb set aflame St Peter’s church in the heart of Castle Park.

Several accounts lay witness to the destruction and chaos that followed. Sybil Moores, a casualty nurse at Bristol Royal Infirmary, described how there were only two nurses on duty during the raids. ‘You didn’t have much time to think’, she says, ‘you just got on with it.’ Indeed, Bristol’s hospitals were so busy treating patients that Moores could not consider running to the air raid shelter just outside designed specifically for such bombings, at marked risk to her safety.

Monty Britton, who grew up in an end-of-terrace house in Horfield, reflected in a similarly stoic manner. He contemplated how everyone ‘knew we were likely to be bombed’ because Bristol was a prominent city with industry and docks. Unfortunately for Bristol’s citizens, and its buildings, the German Lutwaffe were able to trace a course up-river from Avon-mouth by using reflected moonlight. This path brought them straight to the soul of the city, where Castle Park was waiting. Britton admits he benefitted from youthful ignorance at the time. Him and his mates competed over “the best piece of shrapnel” from the previous night’s raid, unaware of the reality that his grandmother, and the two lodgers who lived with them at the time, coped with the stress by getting blind drunk. In fact, he said that, at the time, he found it ‘tremendously funny’, completely unaware of the turmoil that enveloped Bristol.

The aerial barrage was far from a jovial matter. 207 people were killed during the first night alone before reprisals began again on December the 2nd and 4th. A further two attacks then saw the end of the bombardments which culminated in the Good Friday Raid of April the 11th 1941. In total, Bristol’s blitz saw 548 air raid alerts; 919 tonnes of high-explosive bombs and thousands-upon-thousands of incendiary bombs. 1,299 people died and 1,303 were seriously injured. Castle Park now stands as a physical reminder of Bristol’s endurance and resiliance. The raids destroyed a vast amount of the built environment in this area. The castle district, in particular, was one of the worst hit zones and has never fully recovered.

'Castle Park now stands as a physical reminder of Bristol’s endurance and resiliance. The raids destroyed a vast amount of the built environment in this area. The castle district, in particular, was one of the worst hit zones and has never fully recovered.'

Images of jolly residents perusing shops, conversing in cafes and revelling in what was once a bustling social area are now rare. Remarkably, Castle Park has largely remained immune to the significant levels of development that has seen the city’s centre refashioned in recent decades. As Maurice Bye notes in his book Castle Park: Before the Blitz, any construction that has taken place has supplemented Castle Park rather than detracted from it. Recent buildings across the river are notable for their stark contrast with the history on the other side. Hopefully its prominence remains untouched for future generations.

Do you think there is an unknown history in Bristol that needs telling? Let us know: