The Hawthorns is keeping (c)up with environmentalism

Eat your heart out, Greenpeace. Source Café at The Hawthorns is now the controversial bastion of environmentalism.

The Hawthorns have announced that they will begin charging extra to those without keep-cups, rather than offering a discount to those with a reusable coffee cup. The cost of a coffee in a disposable cup will now reach new, eye-watering, student-loan weeping levels.

I have never left The Hawthorns without feeling like I have been robbed, but now with this added cost, a flat white will now enter the realms of a once-a-term extravagance - akin to a Waitrose shop, feather mattress-topper, or a ticket to a Dramsoc performance.

Nevertheless, it is heartening to see environmental policy, other than the esoteric Green Vision and Strategy, being enacted at Bristol.

The cost of a coffee in a disposable cup will now reach new, eye-watering, student-loan weeping levels.

Punishment rather than incentivisation is a sentiment after my own heart. Such a penalty will, I believe, encourage students to invest in a keep-cup, or, as in my case, use their virgin keep-cup for the first time - despite having had it for well over a year.

This is a trivial example of environmental activism compared to the seismic-shift in global attitude needed to confront the crisis at the brink of which we stand, but it mustn’t be sneered at. It is through such parochial activism that we carve this cataclysm into manageable pieces. These everyday changes add up.

High-street coffee shops have all adopted the system of reductions to those who bring their own cups, but this has not been enough. A twenty-pence saving is not enough of an incentive to make us stop and change our wasteful ways. Sadly, the vast majority of us still opt for the paper cup, wholly discarded minutes after purchase, sent to its premature burial as a result of our own absentmindedness. 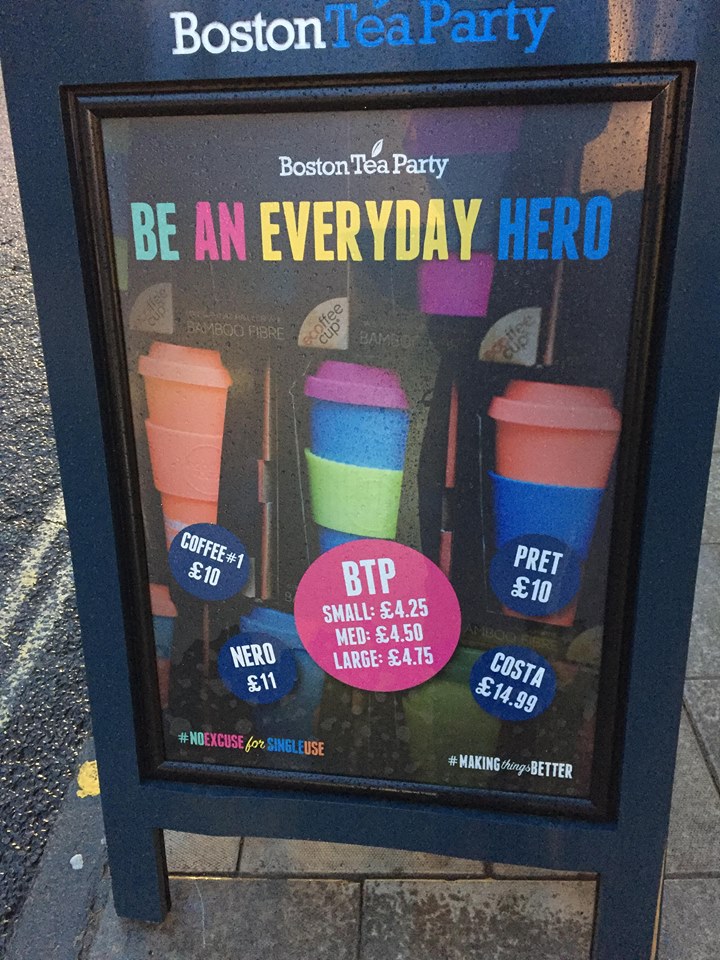 In most high street coffee shops, savings can be had if you bring your own re-usable coffe cup.

The thought of being charged more for our beverages than our fellow keep-cup-carrying caffeine-junkies rankles with our avaricious psyche and being chided for our wasteful ways every time we head into The Hawthorns will change our ways, I have no doubt. I for one will be digging out my keep-cup, stowing it in my bag, and smugly digging it out like the Al Gore of the Source Café.

The introduction of the policy is microcosmic of what is needed for wider environmental policy, not just at Bristol, but throughout the country and the world.

The Hawthorns’ central location means it is very well-used – I have never been in a queue shorter than five people, and therefore it will be influential. This change affects a great many Bristol students who use the café as their 8:50am caffeine hit.

The introduction of the policy is microcosmic of what is needed for wider environmental policy, not just at Bristol, but throughout the country and the world.

If this policy works, the number of card-carrying keep-cup enthusiasts at Bristol will increase exponentially, and their behaviour will, we hope, rub off on their flatmates, seminar colleagues and families, who will in turn preach the benefits of the keep-cup as a handbag or rucksack essential.

I have greatly trivialised the catastrophic problem of global climate change and have perhaps blown the influence of both keep-cups and The Hawthorns out of proportion.

Nevertheless, this is a tangible difference to many of us; the effect is real and immediately felt - judged and penalised for our un-environmental laziness.

What do you think about the charge? Let Epigram know!