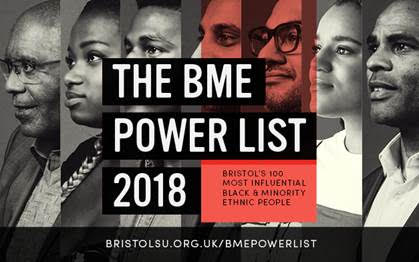 The BME Powerlist has been released today, October 1, marking the start of Black History Month. The list is compromised of the city's 100 most inspiring and influential black and minority ethnic individuals, as nominated by other members of the Bristol community.

Honoured to be part of this incredible BME Powerlist curated by the unstoppable @ChantayyJayy. Doing bitttttttts https://t.co/4RqBqMTKxj

Founded by Chante Joseph, it was launched in January 2018 and came about following University research into the BME attainment gap in local communities. It was noted that the BME community should have more visible role models to inspire them in their future careers, activities and engagement with the wider community. It also aims to improve communications and links with students, with those honoured on the listed tasked with sparking more conversations with students in order to increase BME engagement.

Joseph, now co-chair of the project, added that working on the list has been her 'greatest achievement whilst studying at the University of Bristol'. She notes the list's importance and necessary production as a way of recognising and being made aware of 'the unsung heroes' that contribute to making Bristol the city and community it is.

One of the judges, Sado Jirde, Director of the Black South West Network, said that the BSWN was happy to be supporting a project that showcased the 'diverse talents that exist within the community that often go unnoticed'.

The list has been nominated for the Diversity Marketing Campaign at the Year of the Inclusive Companies Award. The Powerlist, printed by Bristol 24/7, is now available across the city. You can also view the full list online.

Those named on the list, judges and the wider Bristol community are invited to an event on 27 October to engage in conversation and increase BME encouragement in local communities. Tickets can be booked online.