‘The Doomed Hysteria of an Unexamined Mind’ @ Alma Tavern Theatre

After the success of the WORMS Theatre Company’s ‘Pale Wife, Factory Slug, Limp Man and a Black Hole’ in December, the packed audience of the Alma Tavern Theatre had high hopes for the emerging company’s second theatrical spectacle. The audience were certainly far from disappointed with director Teddy Monroe and his cast and crew putting on a show worth watching over and over again.

‘The Doomed Hysteria of an Unexamined Mind’, which ran from 23rd May until 25th May, is an exploration of the mind of Clementine (Albie Marber) who embarks on a quest for madness following various traumatic ordeals, such as the death of his parents. Jessie Milson, who plays the girlfriend, climate activist, Clementine’s mother and a family friend, aptly describes the play as ‘blending the boundaries between tragedy, comedy, and this kind of psychedelic description of what it means to be alive’.

While the characters portrayed by the cast of four are hard to like, the actors rose to the complex challenge offered by the script written by their young director. The performers’ chemistry was second to none, with the relationship and dynamic between Clementine and The Narrator (Jago Abbott) developing gradually throughout the work, unravelling to finally present The Narrator as the protagonist’s internal interlocutor. All four actors demonstrated the theatrical movement and character presentation anticipated of professionals with years of experience, with George Pack, who played Clementine’s father, a perverted priest, and the homeless man, and Milson both exceeding expectations in capturing the varied and wide-ranging anguishes of each of their characters, truly doing the intricacies of Monroe’s accomplishment justice. Having said this, while the plot and script generally offered much food for thought, the fourth wall breaks did not consistently hold the impact that they might have done, with the references to Polyphemus on cardboard signs also seeming a touch disjointed with the play’s otherwise contemporary and Banksy-esque social commentary.

The design elements of the play were exceptionally effective with the minimalist set and limited yet well considered lighting ensuring the audience remained focused on the action and themes of the play. The accumulation of props, as they were haphazardly discarded on-stage after use, succeeded in subtly representing the progression of Clementine’s madness and were a fitting addition in his journey to insanity. This was undoubtedly thanks to Monroe’s direction, which also saw note-worthy attention to detail regarding the costumes, such as The Narrator’s socks poking out from eccentric brown and orange brogues, and the stereotypical dress of dungarees for the climate activist. Minor technical hitches of the second night were handled with poise and composure from all cast members and crew, in particular by Marber, who remained in character throughout, keeping the play moving by creating an improvised dialogue during a lighting fault, which matched uncannily well with the phrasing and articulation of the rest of his outstanding performance as Clementine.

Overall, the twisted and dark humour of ‘The Doomed Hysteria of an Unexamined Mind’ demonstrated the expansive potential of both WORMS as a company, as well as everyone involved in its production and performance. Undoubtedly not for the feint-hearted, with ten content warnings on the programme suggesting as much, Monroe’s most recent work was complex, professional and noteworthy, with the cast and crew providing an evening of fantastic entertainment that was not one to miss. 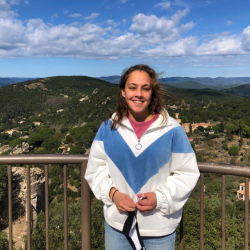 In conversation with Roxanne de Bastion