Pro Vice-Chancellor, Professor Nishan Canagarajah speaks to Deputy Editor, Nikki Peach about microaggression and how to confront it on campus. #WhatsMicroaggression

Canagarajah was born and educated in Sri Lanka, then received his BA (Hons) and PhD degrees from the University of Cambridge, in 1989 and 1993 respectively. He joined the University of Bristol in 1993 and has been Pro Vice-Chancellor for Research and Enterprise since August 2014 where he has overall responsibility for all research and enterprise activities.

When asked how he would best define microaggression, a term that according to an Epigram survery a quarter of students have not heard before, Canagarajah said: ‘I would normally define microaggression as any physical, behavioural or verbal gesture that seems like an insult. It’s something derogatory and possibly discriminatory.

'Microaggressions occur on the basis of gender, race, class or a number of different things. I think often people view them just in terms of race but it goes beyond that.

‘For example, occasionally when some of my female colleagues enter a room the male colleagues will say “are you here to make tea?” or in a meeting they will say “are you taking the minutes?” It's also important to note that microaggressions can be intentional or unintentional, sometimes people don’t realise that what they are doing is committing a microaggression because they are casual, daily actions that people don’t realise cause offence.’ 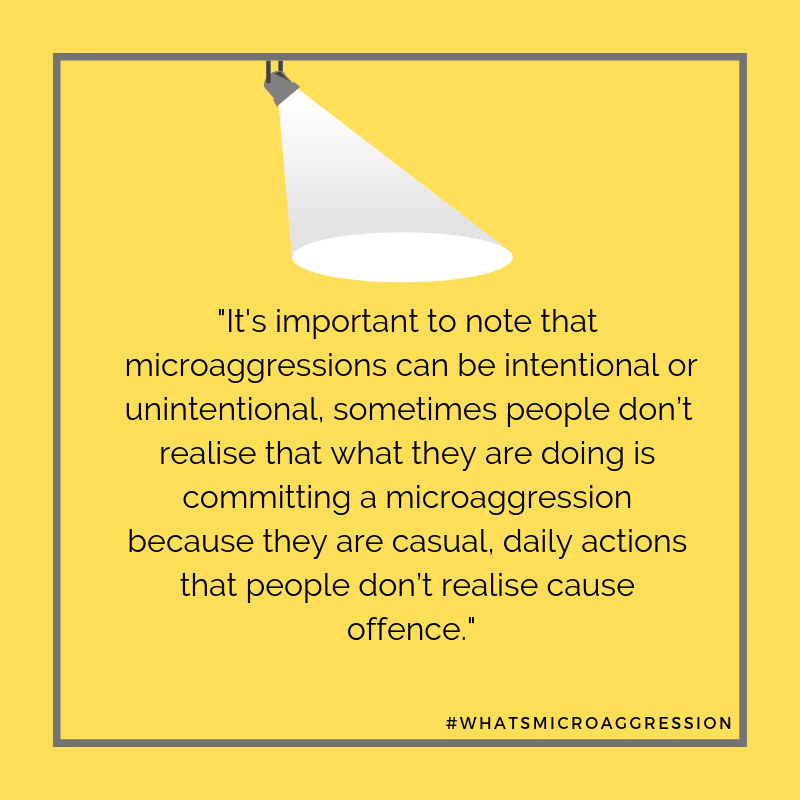 Canagarajah went on to explain why the recognition of microaggression is so important, particularly within a university environment. He said, ‘I think with microaggression, the main difficulty and the reason why it's so rarely discussed is because one isolated incident doesn't seem like a big deal. People might think “oh, it was just a casual comment why am I making a big deal out of it?” but the reality is if you have had many of these incidents then they gradually start effecting your self-esteem.

‘You start questioning yourself and think that maybe something is wrong with you. If you are a student in a seminar or group environment and feel that you are being constantly undermined, then you will just stop speaking up. If you then stop contributing it will begin to affect your achievement and it’s the same with staff. There is plenty of research that shows if there is sustained microaggression people develop mental health issues.

The Chief Executive of the SU, Samantha Budd recently offered a helpful analogy during a discussion bout microaggression, comparing small acts to mosquito bites. One mosquito bite does not seem like an issue but when you are covered in bites it becomes more of an insurmountable problem.
The Pro Vice-Chancellor agreed, ‘It’s because gradually, these things wear you down. In a university environment, it’s all about ideas. It’s not just manual work, your contribution is your intellect and for that reason students need to feel heard, valued and respected and microaggression does anything but support that.’

Canagarajah then addressed the issue of intersectional microaggression and the difficulty of confronting it on campus. ‘The acts are subtle and it is hard to understand whether you feel offended because you are a woman or if it is because you are minority ethnic.'

He added, ‘The other way of looking at it is that if you already experience microaggression because of your gender or ethnicity, when you combine the two it’s going to amplify.’ 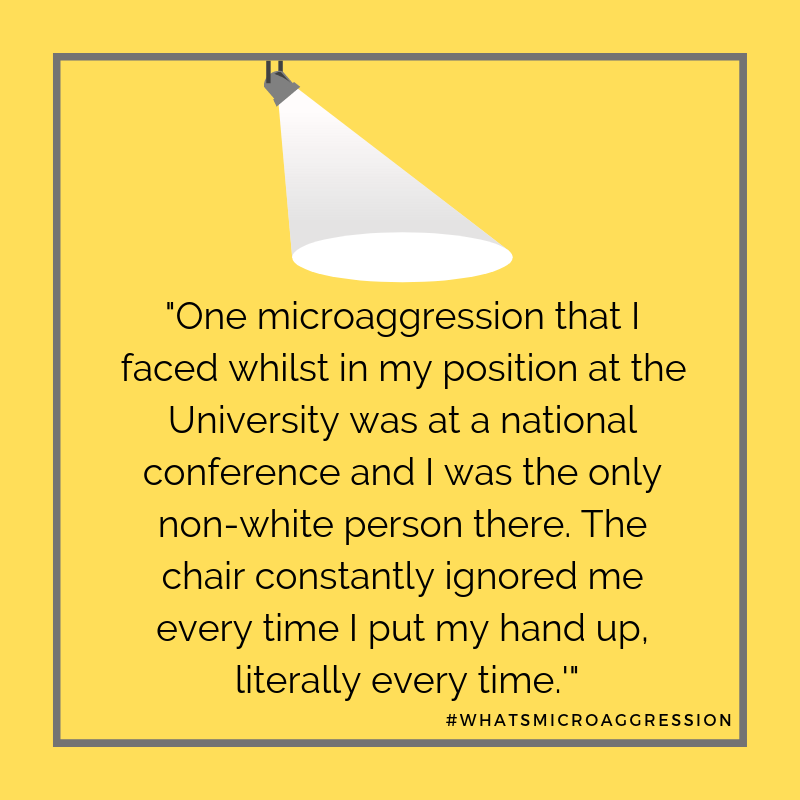 Canagarajah then began to describe his personal experiences of microaggression and how they have impacted his self-esteem. ‘I’ve been walking on the street and people see me and clutch their handbags. One microaggression that I faced whilst in my position at the University was at a national conference and I was the only non-white person there. The chair constantly ignored me every time I put my hand up, literally every time.'

Appalled he added, ‘I just thought, in this day and age? This was a highly qualified individual and I was very surprised. But in fact, I have seen this happen to female colleagues as well where a man simply won’t take a question from them.'

Describing a particularly microaggressive incident, he joked, ‘I don’t know if this is embarrassing but I will tell you anyway, when I went to City Council to have a meeting with the Mayor, the person at the reception desk pointed me to the taxi queue. He clearly thought I was there to get a taxi permit. Now he stands up to respect me because he knows who I am but it was just an assumption, that’s microaggression.

'Fortunately, at the university I experience these things much less but there are people, colleagues, who have told me about microaggressions they have faced at work.

‘Another time, myself, the Vice-Chancellor and the Deputy Vice-Chancellor went on a visit to India and when we were there I was the only person who was not white. And the Indian people there treated my white colleagues and European colleagues with a great deal more respect than they did me. They helped all the white people but not me, that’s reverse racism. They just think Europeans are superior and must have assumed they would provide better business or better tips. It happens everywhere.

We then discussed moving forward and how best to address or confront daily microaggressions. ‘The problem is it’s very subtle’ he said, ‘so it’s very hard to know if you are blowing something out of proportion or whether it is an act of microaggression. It’s a wide spectrum, some acts are so innocent that even the person experiencing it does not realise.

‘The other extreme is quite overt and bordering on offensive. People think of microaggressions as isolated incidents but the problem is they accumulate and then it gets worse.

In terms of how the University can endorse this idea and promote positive change, Canagarajah said, ‘I would like it to be an educational process, so that we’re all learning together. Rather than being like, “look what you’ve done, you’ve upset me”, we can learn together and acknowledge microaggression more as something not to do next time.'

‘The best way to deal with it is 1) be aware of microaggression and let people know when you recognise on act. 2) Training! People in responsible positions and leaders need to know and understand what microaggression is. When there are incidents of microaggression we must all make it clear that it is not acceptable. 3) We need to become more inclusive as a University, that is the real way we can deal with it. It shouldn’t be abnormal to see a black person or a female person holding a senior position. That is what’s normal and this environment should reflect that.

He admitted, ‘we need to look at our recruitment strategy and ensure we are recruiting students and staff from all types of backgrounds. As a University we also need to think about the training we provide for staff in key positions so that they are good role models who exhibit the kind of behaviour we would expect to see.'

‘Bystander training is currently happening on two fronts. We started initially with rape and sexual assault- if you are a bystander, you are trained on how to deal with that and the same could be done in other areas. You learn how to identify what harassment is or what microaggression is and then you can recognise offensive behaviour and learn how to deal with it. 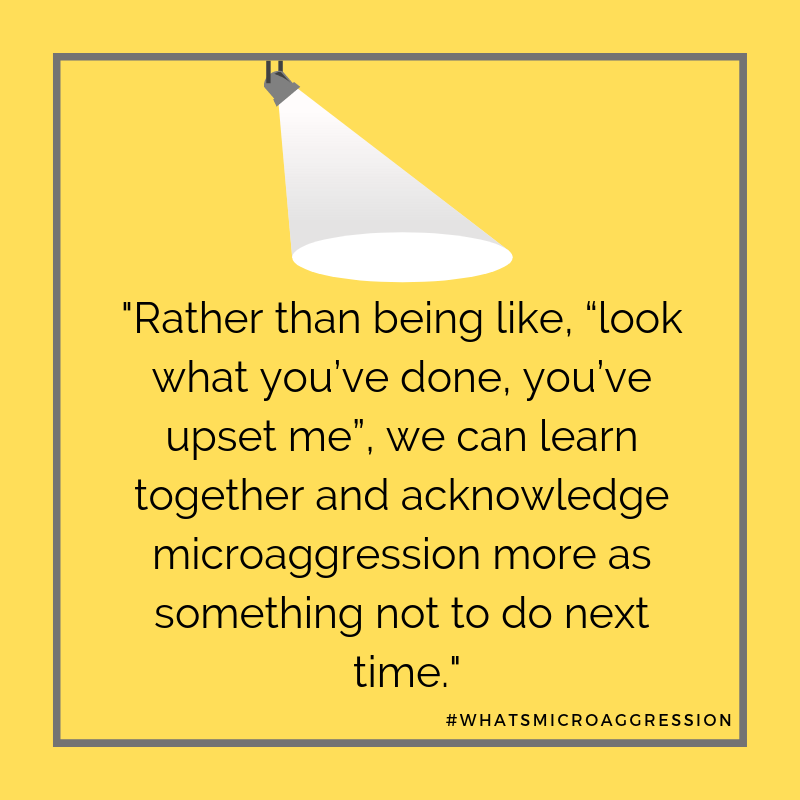 'Training allows you to determine whether you need to talk to the police or get help from someone else and confront the individual. You have to know how to intervene appropriately. We need to raise real awareness within the institution. Even people on the Senior Team might not know what microaggression means and that would only be because they have not experienced it.

Canagarajah ended the discussion by supporting a new idea for Freshers to be educated on microaggression and how to identify, acknowledge, discuss and confront them on campus. ‘An induction for Freshers is key. That’s the kind of thing we need to start with, people need to be better equipped to deal with these issues. I don’t think it would necessarily cost a lot of money, we just need a model drawn up and it can easily be covered as part of the induction. I think it's a great idea.

‘Hopefully the SU will champion this.’

An insider’s guide to the progressive city of Prague