Following on from History student Eve Burke-Edwards' article calling for social media realism, Style Editor Nancy Serle homes in on the Snapchat app and questions whether the likes of filters affect the way we see our 'real selves'.

We have all experienced the unflattering double chin that appears when we accidentally open our phone's front camera, or that sinking feeling we get when a Snapchat filter doesn't quite compute with our face, it slips off, and we are left staring at someone who doesn't have cutting cheekbones, dog ears, or a flower crown. It can almost feel as though you are looking at a stranger- do I really look like that?!- but in reality, it is just your reflection.

A recent poll by Epigram Style asked Bristol students: How often do you use a Snapchat filter? Whilst only 30% of students stated that they use a filter 'most of the time' (70% said that they 'rarely' used the filter service), a whopping 45% of students admitted to feeling 'more confident' sending images of themselves on the social platform when they did use a filter. 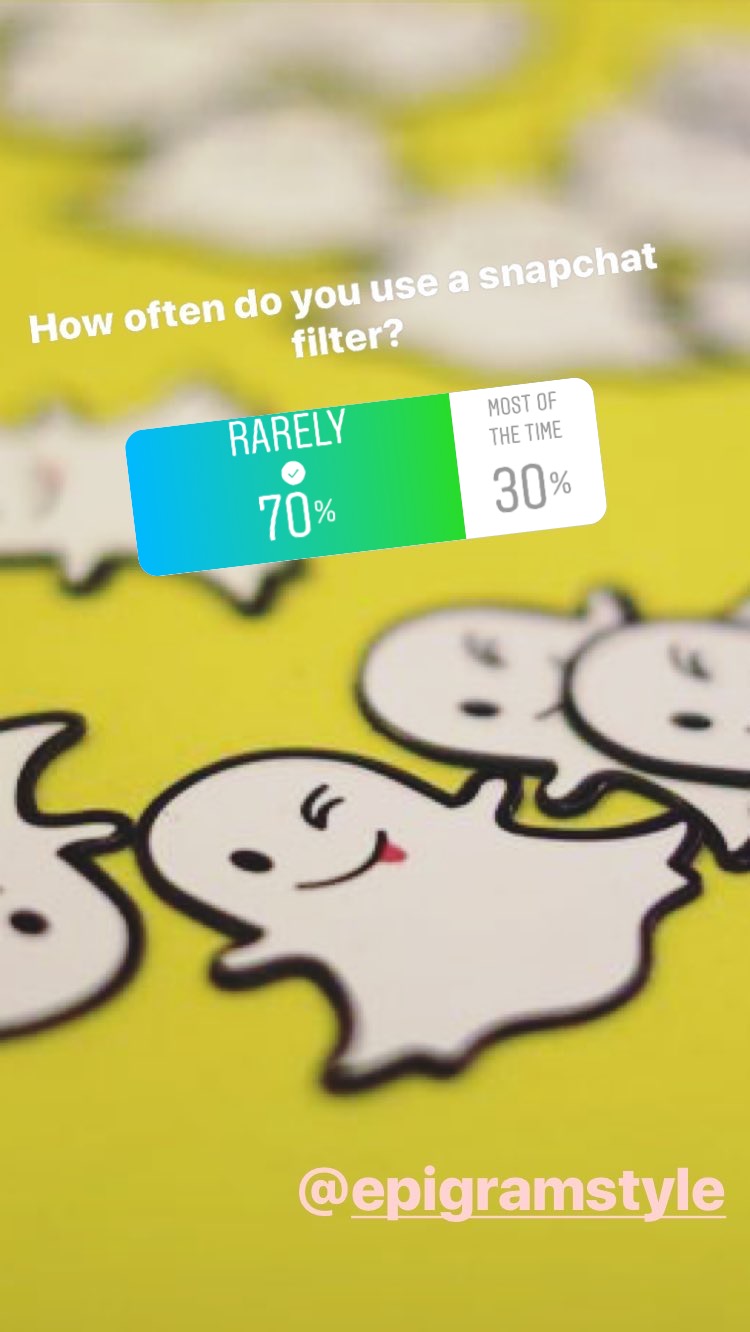 Snapchat has undoubtably revolutionised the way we present images of ourselves on social media. Whilst editing photographs is nothing new, Instagram has allowed us to Clarendon, Gingham and Inkwell ourselves from its outset, Snapchat focuses primarily on our faces offering standardised filters that actually distort the proportions of our eyes, nose and jaw. Often, what we see when we use a Snapchat filter is nothing like what we see in the mirror, but what we see as a 'better' and more 'attractive' version of ourselves. It is no wonder that almost half of the Bristol students surveyed turn to Snapchat filters to boost self esteem and feel more confident.

With 83% of people aged 12-17, and 79% of people aged 18-24 using snapchat at least once a month, an incredible amount of young individuals regularly see themselves thought Snapchat's distorted lens. Personally, I think I know about 3 people under the age of 25 who are not active users of Snapchat or don't have the app at all. With access to the ability to change our faces at the click of a button, undoubtably the social platform is having an effect on how we see our real selves and how we feel in our own skin.

could we talk about the blatant eurocentric beauty ideals that are perpetuated by snapchat filters? & inherent racism that implies? thnks

Speaking to the Huffington Post about Snapchat's effects, psychology professor and author of Beauty Sick: How the Cultural Obsession with Appearance Hurts Girls and Women, Renee Engeln stated:

'There's an issue with losing perspective on what you actually look like, and it's not something we talk about much'

'Its not enough to have to compare yourself to these perfected images of models, but now you've got this daily comparison of your real self to this intentional or unintentional fake self that you present on social media. It's just one more way to feel like your falling short every day'

Whilst the damaging effect on self-esteem when we are not behind the guise of a filter is evident, Snapchat has also altered the beauty standards we strive to achieve today. The platform has already been criticised several times for the filter's promotion of thin, westernised beauty ideals; the narrow nose, the lightening effect.

Whilst I'm sure many of us simply consider Snapchat filters as just a bit of fun (I will admit that I am partial to the classic 'rainbow sick' filter when it pops up), it seems that some are internalising its effects. Recently, plastic surgeons have noted that many young individuals are coming in to their clinics with pictures of celebrities or themselves using Snapchat filters as inspiration; images that are both distortive and often, unattainable.

Is Snapchat redefining the standards of beauty? See what experts have to say about this phenomenon and how it is changing patient behavior. What are your thoughts on this emerging trend?#cosmeticsurgery #aesthetics #beauty #snapchat #plasticsurgeryhttps://t.co/IZkyial4eu

'Everyone basically is using a filter on their own and they're taking that next step to bring it to me saying, 'Hey, this is what I want to look like''

'Not everyone is going that far, but in their head, that's what they want to look like and then they're coming to me saying 'I want smoother skin, I want my eyes to be opened up, I want my lips to be fuller''

This disturbing new trend has been coined 'Snapchat Dysmorphia'; a variation of Body Dysmorphic Disorder (BDD) which as the NHS website states, has symptoms such as: going to a lot of effort to conceal 'flaws' through heavy make up and hair styling, picking at skin until it is 'smooth' and spending frequent amounts comparing your appearance to others. Unsurprisingly, the effects of Snapchat filters relate heavily to these symptoms: the smooth skin, the long lashes, the cheekbones.

Snapchat "filters" will be linked to body dysmorphic disorder in the near future. Making everybody look like MJ, with a wreath as well. Mad.

*It seems as though, unfortunately, JME was prophetic in this 2016 tweet*

Whilst going to the lengths of plastic surgery to look like a filter is an extreme solution, for some with this disorder, or simply those who feel uncomfortable with their appearance, it is the only way to feel confident. Such effects can even be seen on a smaller scale all around us; two of my friends have admitted to desiring the long eyelashes that frequent several of the Snapchat filters; one even got £40 eyelash extensions specifically to achieve the effect. Another dressed up as a the 'dog filter' for Halloween.

So where Snapchat (and Instagram who have now introduced facial filters of their own) can seem all fun and games, there is no denying that these filters are having an adverse effect on beauty standards we aspire to today. The filtered looks provided are unattainable and distort the idea of how our faces should really look. Whilst, at the moment, here in Bristol only 30% of students regularly use these filters, with the omnipresence of Snapchat and the internalisation of its beauty standards, unfortunately it seems as though these figures will rise as more and more people turn to filters to feel confident on social media.

What do you think about the use of Snapchat and beauty ideals? Let us know:
Facebook // Epigram Style // Twitter