After two days of strike action, Hugh Brady, Vice-Chancellor at the University of Bristol, has tonight called for Universities UK to renew talks with UCU over proposed pension changes.

It follows calls from other Vice-Chancellors across the country, such as Warwick and Loughborough, and much pressure from staff and students across the University of Bristol for Brady to take a public stand on the issues surrounding strike.

Related article: Everything you need to know about the upcoming strike action 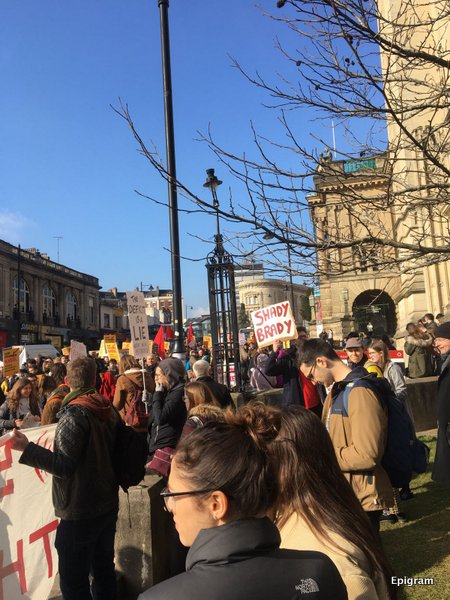 ‘The industrial action we are seeing across the county is regrettable, I understand the strength of feeling and the deep concerns that this action reflects, and fully support the right of our staff to make their voices heard. I am disappointed that as a sector we have arrived at this point’

‘This is a national dispute, and requires a national solution. I urge both the University and College Union and Universities UK to return to negotiations.

‘I want to take this opportunity to thank all staff for their continued professionalism and for all the hard work and dedication they give to our University community’.

Thursday was a day of mass strike and saw hundreds of staff and students march from Senate House to Wills Memorial Building and College Green. Marchers held signs encouraging Brady to call for negotiations and students have also been encouraged to email the Vice- Chancellor.

An annotated version of Brady’s email to students was also distributed across the university on Wednesday criticising his initial response.

This comes at the same time as the news that the strike could affect exams and graduation ceremonies if a solution is not found before June, when the new pension changes are set to come into effect. Nationally, thousands of students have also signed petitions demanding compensation for the lost teaching hours.

The strike is still set to continue on Monday, Tuesday and Wednesday of next week. UUK have invited UCU to meet for talks on Tuesday 27th February, although preconditions have been imposed on these talks. Sally Hunt, UCU General Decretary said today: 'Because this is so serious for students and for staff we will of course attend. I am however very concerned that UUK has explicitly ruled out discussing the imposed changes that have caused the strikes.

'The universities minister was very clear that he wanted talks without preconditions and we hope UUK will reconsider his words before we meet on Tuesday. We remain committed to serious negotiations aimed at resolving this dispute.'

Cooking with Jordan: a food diary