In conversation with David Olusoga: 'we really really need to be talking at the moment'

As part of Black History Month, David Olusoga gave a lecture titled ‘Black People in British History’ in which, as the name suggests, he shared his insights into black figures from our nation’s past. Olusoga has grown in prominence in recent years with shows such as Black and British: A Forgotten History, A House Through Time, and recently in the program Civilisations alongside Simon Schama and Mary Beard. Following his talk I sat down with him to discuss his views on Black History Month. 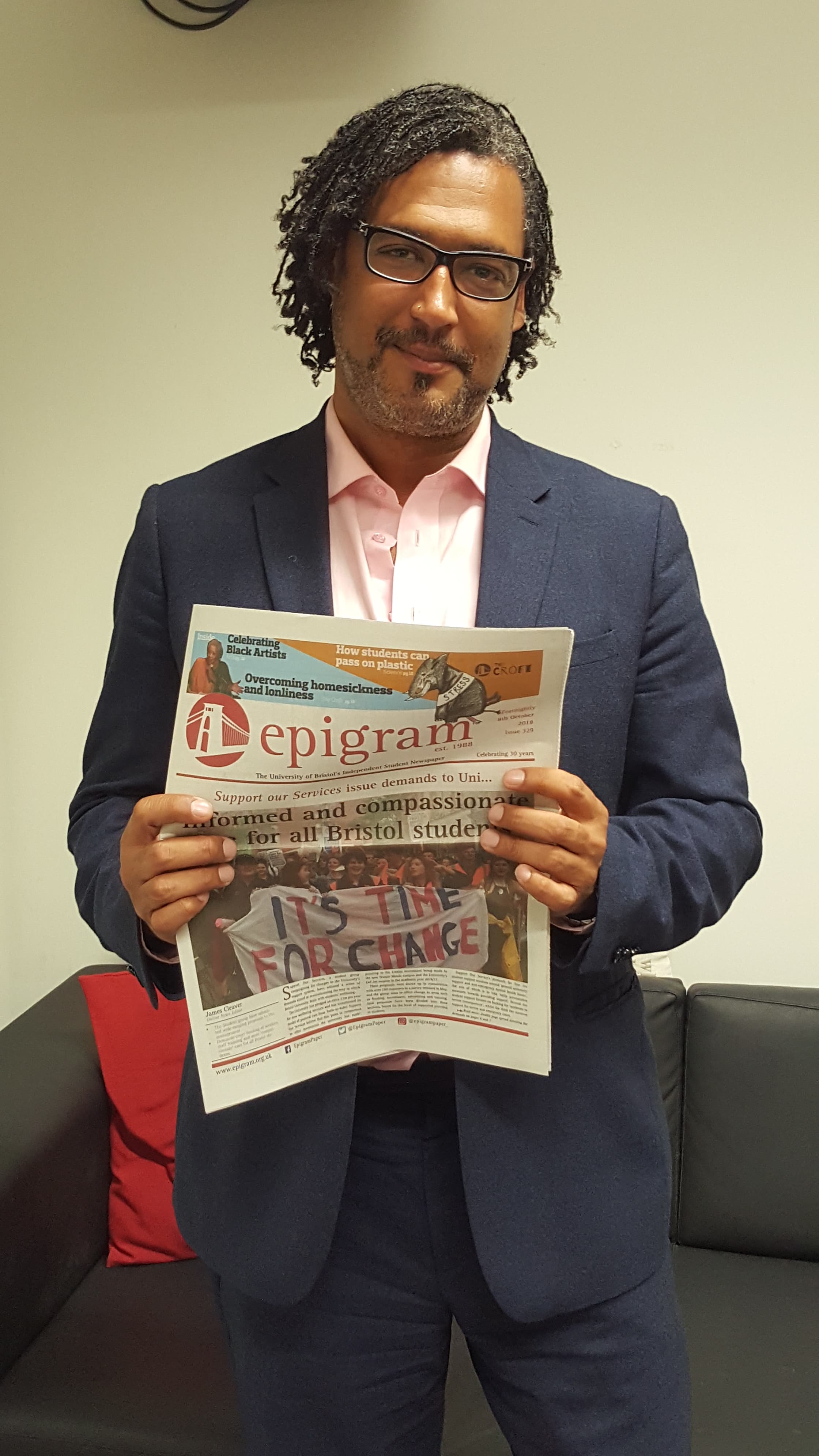 Why is Black History Month important to you and why is it important we learn about it as a wider community?

‘I have been critical of Black History Month in the past because it has been too Americanised because it was an American import. I am a lot less critical now because it gets us talking, that is its fundamental use. It means that these sorts of things happen, it means we have these conversations … I get to come here and talk to you guys and have these conversations about things that I think, that a lot of people think, are really important so you can criticise it and I have and I was wrong but it makes us talk and we really really need to be talking at the moment because things are not going great in the world.’

What do you say to people who say “Why should we have one month for black history? Why not have it as part of our national history all the time?”

‘Well I am a professional historian and I would hate to study any history 365 days a year, we would go crazy. I think that in some ways that is a kind of odd argument … I have never heard anyone say let’s get rid of International Women’s Day, let’s not have Holocaust Memorial Day, let’s have holocaust memorial all year long. These are devices we use, they are landmarks we put in the calendar to remind ourselves to have conversations and they are really useful and it is one of those kinds of non-arguments, I hear it all the time and it is sort of yeah well so what? … Let’s not knock it, and I say that as someone who has criticised it in the past for a different reason but it is not broken, it helps, it means things happen, it has a utility.’

Forgetting the past? 'It is that sort of omission that is dishonesty by omission and we do it all the time'

‘Well I think it is not just about books, it is about conversations we have and I think there is lots of ways in which we talk about elements in British history and we take out the imperial, the colonial, the racial elements. What I was talking about tonight is when I was a kid I was brought up, taught about the industrial revolution, was not taught that the cotton that was Britain’s biggest export, the raw cotton came from America and was produced by slaves. You cannot talk about the industrial revolution without talking about American slavery, you cannot really talk about the Victorian age without talking about the scramble for Africa and we do, we do it a lot, we talk about these half conversations in which the bits that connect what we call mainstream history to what we call black history are disconnected and I think in all sorts of ways we just need to not do that.

There was a documentary made a few years ago about William Beckford of Fonthill who wrote arguably one of the first gothic novels, who built this huge gothic folly in the West Country, it was an amazing documentary about this artistic figure; did not mention that he was the biggest slave owner in Britain. It is those non mentions that sort of tell every detail other than the one that actually relates to histories that involve black people, it is that sort of omission that is dishonesty by omission and we do it all the time.’

'...because history has become recreation, we are uncomfortable and we just skip through the bits where we do not look good, where bad things happen'

Why do you think that is though? Why has black British history been so forgotten until recent times?

‘Because I think we are one of the countries that see history as a place that we go to feel good about ourselves, to feel comforted, to feel a sort of warm glow. German’s do not go to their history to feel warm glows they go there to ask difficult questions and I think if you see history as a place that is like a warm bath where you go to relax you do not want there to be difficult, unpleasant moments in that that are actually morally challenging … because history has become recreation, we are uncomfortable and we just skip through the bits where we do not look good, where bad things happen.

I think you have to ask yourself a question where one of two things could be true; either Britain is like every other country that has ever existed and has done both good and bad or we happen to have been lucky enough to have been born in the only country that has always been on the right side of history and which of those two things do you believe... is the most likely? … if it is the former where we have done good as well as bad then we have got to confront the good as well as bad and then history cannot just be recreation for feeling good about ourselves, it has to also be about difficult questions, difficult stories, tragedies, crimes, things that we lament happened but we need to confront that happened and we need to do it because it is the history that makes sense of the way our country operates, of the way we are today, it is the history of millions of our fellow citizens.’ 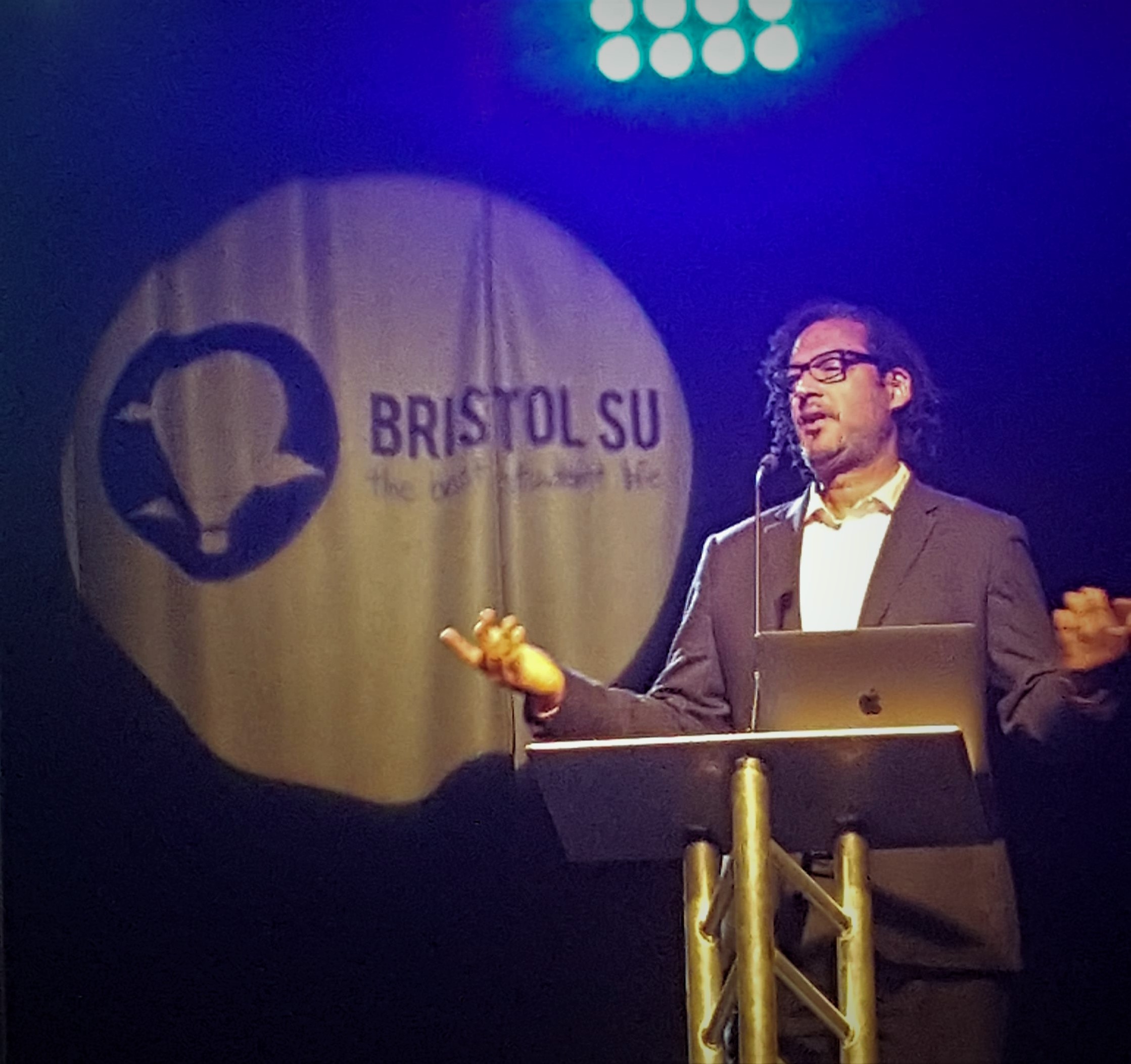 ‘I think that this is a real moment for British universities. I think it is commendable that Bristol University has done this digging, again it is about having difficult conversations that it is easier not to have. But I think now is a real moment. We know that particularly African-Caribbean people in this country are enormously disadvantaged and badly served by the education system. We know that our schools fail, in all sorts of ways, young black people and that there are all sorts of programs that often do not have very much money, that are often struggling to try to right those wrongs and to give us something even approaching a level playing field. I think the knowledge that is now being brought out into the open about the money that was used to found these universities, the debt these universities owe to the systems that created that wealth.

I think now is an incredible opportunity to combine that with what we know about the disadvantages that shape the lives of black people in this country and to provide this country with something which America has far more than we have which is bursaries and schemes designed to get black people into university, people who are the descendants of enslaved people; it is an incredible opportunity. America’s system of historically black universities and bursaries and scholarships has created this incredible African-American middle class, it has created this African-American intellectual class. It means that you go to American universities and there is this abundance, well probably not as much as there should be, but there is an awful lot more black faculty staff than there are in this country.

I think it is still the case there are two black history professors in this country, two! We have done really badly, the areas we have done really badly in this country it is education, it is museums, it is the media, it is the places that are about the propagation of knowledge and we have not welcomed into those institutions all people of all backgrounds in this country. I think these universities have an incredible opportunity to use this new knowledge to begin a conversation about how do we help people who are excluded from education gaining access and use history as an impetus towards action.’

Where do you stand on renaming university buildings such as our own Wills Memorial? You mentioned in your talk you were in favour of renaming Colston Hall because he was a slaver so would you support similar action around a university like Bristol?

Name the generals, they cannot because we do not learn history that way... we learn history through education, through books, through television, through university courses. So these arguments against naming these things, most of them fall apart in your hands. The argument in favour of doing it is do you really want to honour people who did dishonourable things? We do not name buildings, put up statues for any other reason, we do it to honour people, statues are erected in honour of. Do we really want to give honour to people who live dishonourable lives? It is a question for the 21st century. Do we think a man who was a mass murderer in the late 16th and early 17th century should be honoured with a statue, should be honoured with a ceremony in a cathedral in the 21st century in a multi-ethnic, multi-racial city?