Support Our Services, a student group campaigning for changes to the University’s support system, have today released a series of demands aimed at revolutionising the way in which Bristol University deals with students’ wellbeing.

The University has pledged an extra £1m per year for new wellbeing services and has transitioned its model of pastoral care from ‘halls-to-hubs’. Support Our Services believe that this 'pales in comparison to other investments the university has made', pointing to the £300m investment being made in the new Temple Meads campus and the University’s £47.2m surplus in the academic year 2016/17.

Their proposals were drawn up in consultation with over 150 responses to a survey released in May, and the group aims to effect change in areas such as funding, recruitment, advertising and training. Said proposals have been divided into three sections, based on the level of supported provided to students.

One of the key themes in the demands is an increase in the funding apportioned to student support, both in terms of recruitment and facilities, in order to improve coverage of and access to wellbeing services. In terms of recruitment, Support Our Services have stressed the need for more Wellbeing Advisors and full-time psychiatrists, to deal with less serious and greater problems respectively. 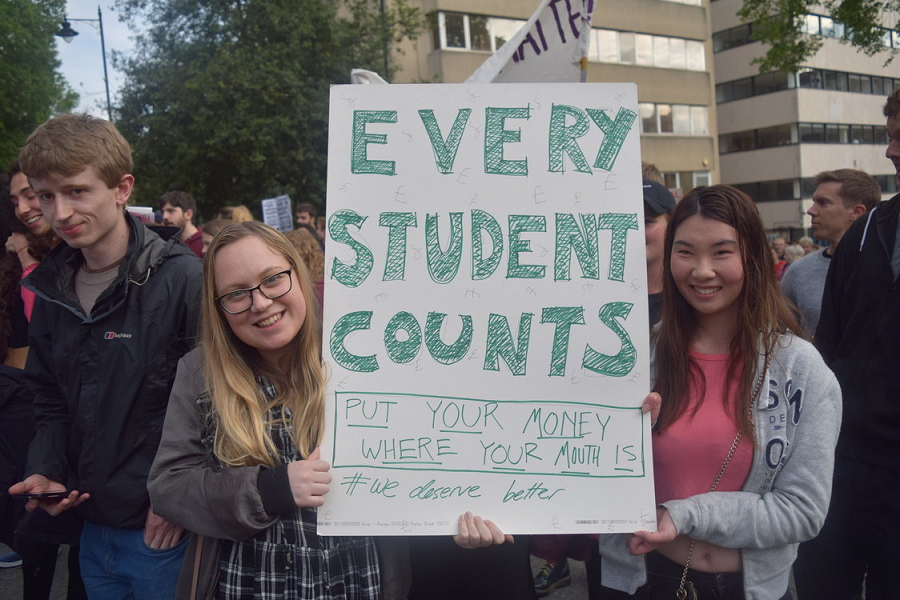 Students on the March for Mental Health last May

The University’s expanded team of counsellors is also called upon to be more diverse, so as to better identity with members of the LGBTQ+ community and to communicate better with students for whom English is not their first language. These counsellors should have their powers expanded to include the ability to refer students to more qualified professionals. The University has received praise for its engagement with the LGBTQ+ community, winning the 'Best Employer' award at the Bristol Pride Gala.

Furthermore, Support Our Services have requested that their new support system is integrated into the University, calling for a volunteer-led student safe space in the University grounds, with trained students always present. According to them, ‘the new Senate House remodel could facilitate this.’

The demands emphasise the importance of personal tutors and lecturers in improving the quality of provision. All personal tutors are mandated to meet their students at least twice a term. Support Our Services also urge that attendance should be closely monitored in seminars, with tutors taking a much more proactive role in checking up on students whose attendance is consistently low.

'The demands emphasise the importance of personal tutors and lecturers in improving the quality of provision.'

All staff should undergo formal mental health training, which would replace the reading of an online booklet for preparation. On top of this, all staff, especially those working in halls of residence, should receive suicide prevention training. To ensure the completion of a holistic response process, the University should follow-up with those who have finished their treatment, reinforcing the sense that help is always available.

Following the low turnout at the optional sessions on wellbeing, support services and consent during Welcome Week, Support Our Services have requested that the aforementioned sessions be better promoted and made compulsory, as the consent session was before the 2016/17 academic year. Extra funding has also been requested for the Student Health Service to better signpost their mental health services.

The implementation of a more humane approach to the Fitness to Study programme is also requested. One of the co-founders of Support Our Services was disallowed from attending student counselling while suspended, and then forced to rent private accommodation because ‘the University was worried about her effect on other students. This ordeal has massively affected her mental health negatively.’

Support Our Service's demands for first tier student support revolves around ‘general university support and non-emergency mental health issues’, the aim of which is to take ‘early preventative measures towards providing support’. Second tier student support focuses on backing for ‘moderate to severe consequences’, whilst the third tier involves support for severe and emergency cases.

What do you think of the demands? Let us know...