Following their successful march for mental health last year, engaging 500 to 600 students, the forum set out to clarify and develop the demands, aims and achievements of SOS. 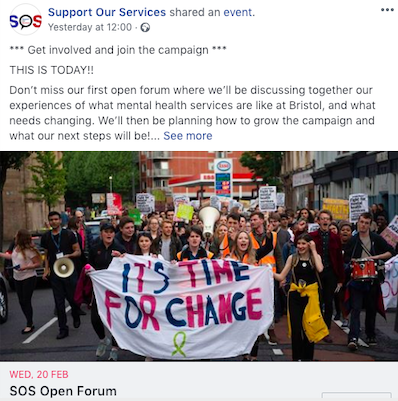 Their discussion yesterday mainly focused on how they can affect change and what this means for their campaign moving forward.

Improving sign posting, reducing stigma and the question of how to get the University management to shift—with regards to budget—were among the topics addressed. Also covered were issues faced by international students and marginalized groups, and the problems associated with the University’s fitness to study policy.

Members of the forum suggested that regular meetings and building a community of campaigners is key to engaging with student opinion. They also expressed keen interest in hearing from the student population as a whole, as well as individual stories.

The value of informal or self-education when it comes to mental health was also raised, as well as a potential for official education to be offered by the University.

Further discussed was the need to ensure diversity within the Student Counseling Service, for example counselors specialized in dealing with issues faced by the LGBT+ community, as well as linguistic diversity.

The Fitness to Study policy was stressed as an important issue with regards to the campaign; both the official procedure and the informal means of implementation were called into question.

The Fitness to Study policy allows the University to force students into suspension, without discussion and sometimes with very little warning. SOS stated this to be a prominent focus of their campaign due the negative impact this procedure can have on the mental health of affected students.

Reflecting on the forum, SOS said:

'We have been looking forward to hosting our first open forum, and we were delighted with the result. We felt that it resulted in a great space in which productive discussion took place, and we are very pleased with how people engaged with the campaign. There were some brilliant suggestions in regards to how we can affect change both as a community and as individuals, as well as great ideas as to how the campaign should move forward.'