Bristol SU is fantastic - students just need to engage with it

Despite the small amount we hear from them, the SU are actually great and we would benefit from engaging more with them. We should all be taking part in the SU election.

Until hearing of the Student Union elections last week, I will admit I had only a vague idea of what the Student Union actually does. Organises Freshers' events? Offers bubble wrap to stressed students during exams?

It was only recently that I took it upon myself to learn more about it. I have realised that it is fantastic.

Firstly, the SU has achieved a lot. The opening of the SU Living Room is its most notable recent achievement, responding directly to students’ requests. It is a place where the focus is not on work. Students can relax, socialise and eat their lunch. More broadly, the living room serves as recognition of the importance of taking breaks from work, for the sake of our mental health.

Impressively, the SU also launched the BME Powerlist following its research into the BME attainment gap.

The SU has also taken affirmative action to represent student voices regarding the University’s mental health and wellbeing strategy, ensuring feedback regarding the strategy was taken on board during its formulation.

Through SU councillors and academic reps, educational changes have been brought about, responding to student demands for improved feedback, access to exam transcripts, and changes to reading weeks sought by Arts students.

The outstanding ability of the SU to capture and represent student opinion is reflected in the fact that the SU research team was shortlisted for a Bristol teaching award.

In addition, the SU runs fourteen networks, with which each SU officer is involved. These networks create a sense of cohesion within the University, something I find the University lacks. 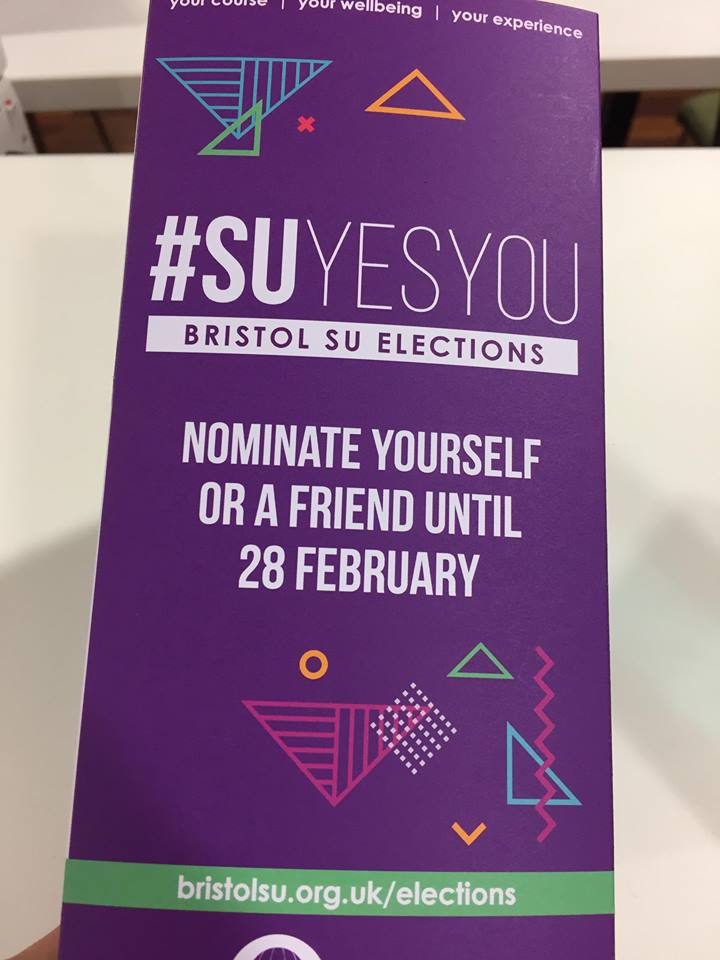 Perhaps if the work of these networks, and ways in which students can become involved with them is publicised more widely among the student population, there will be a greater sense of community, and greater interaction with and appreciation of the SU.

Impressively, the SU also launched the BME Powerlist following its research into the BME attainment gap.

However, as we are largely unaware of the superb work of the SU, we fail to appreciate or engage with it.

This is disappointing, as the SU has an impressive capacity for enabling student involvement and engagement, which could cultivate a rich student democracy.

So why do intelligent learners fail to engage with the SU, undermining student democracy?

Because what the SU does and how it operates is not made clear to us. An ‘explainer’ booklet should be given to students upon starting university, covering the main aims of the SU and how to get involved with it, either as a representative or by voicing complaints.

why don’t we try and turn our criticisms into tangible change? We have the mechanism to do this, and that is the SU.

But it is not simply the result of a lack of understanding. Students have other priorities.

It is easier for a student to anonymously type a complaint about their failure to find a workspace into Bristruths than it is to attend the AMM, or directly pressure SU representatives to force change.

We need to be more proactive in voicing our grievances.

Your voice is powerful and it can make a difference. There are different surveys running at the moment for you to shape the uni and help make it yours.
Fill them in >> https://t.co/wR9Te55bVJ pic.twitter.com/R0tsAWLhu0

Students are always complaining. So why don’t we try and turn our criticisms into tangible change? We have the mechanism to do this, and that is the SU.

Our voice has to be effectively represented. And for this to happen, we need to engage with the SU in larger numbers.

We should explore what the SU is working on. If we have a better understanding of the SU, we can better hold it to account, bringing forward candidates who are more likely to bring about real change. Thus will enable the SU to be better able to enrich our lives as students.

What do you think about the SU? Let Epigram know!

Why Liverpool were right to loan out Nathaniel Clyne

How to: group holiday