All you need to know about Bristol SU's Zero Waste Fair

Outraged by pointless plastic packaging? Want to find some easy plastic-free alternatives? For the second year running, the University of Bristol’s Zero Waste Fair is back, bigger and better than ever!

As part of the University’s Sustainability Month, we bring to you three guest speakers and over twenty-five stalls! The fair will feature the likes of Toast Beer, No More Taboo, Lush, Bristol Against Plastic, Preserve Foods, Zero Green and much more, bringing along a few zero-waste goodies for you to try! 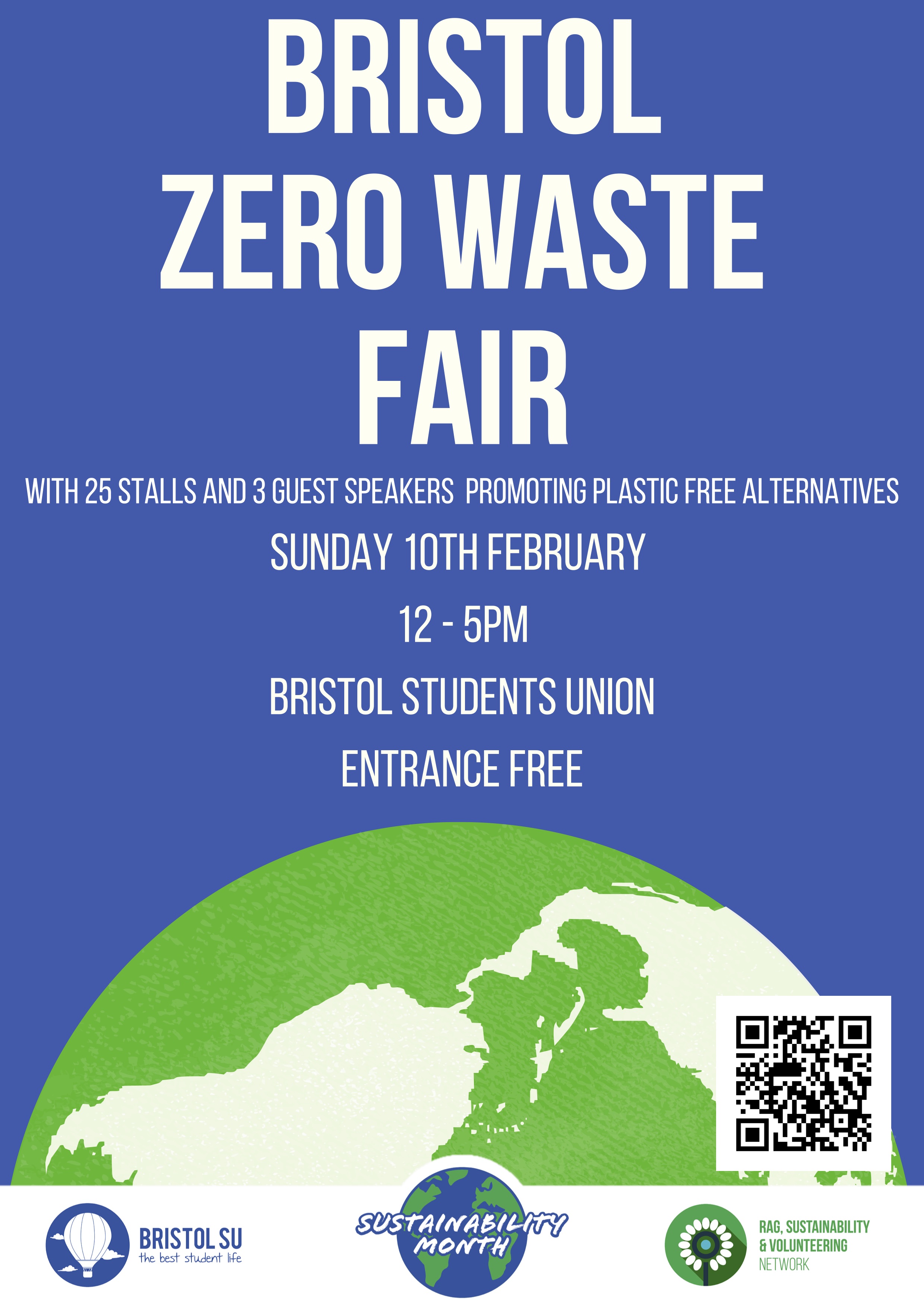 By this point we’ve all seen the masses of plastic waste littering scenic landscapes and the infamous video of a straw being brutally dislodged from a turtle’s nose. But it is only recently that the issue of waste, particularly plastic waste, has been catapulted to the forefront of the media. In fact, growing up, most of us were so completely surrounded by plastic that we became desensitised to the threat it poses on the environment. Even worse, plastic appears in objects that do not necessarily look or feel like plastic. Most clothing is made of nylon and polyester, or more surprisingly, plastic is used in minuscule quantities as an adhesive to seal the vast majority of the 60 billion teabags in the UK each year. It is clear that plastic has emerged in almost every aspect of our everyday lives and seems impossible to avoid.

The issue of plastic waste is that most of it is fundamentally non-biodegradable, with estimates ranging from 450 years to never for it to completely biodegrade into its constituent molecules. And with around 8 million metric tonnes of the stuff entering the ocean each year, the consequences are catastrophic. National Geographic have reported that nearly 700 species, including endangered ones, are known to have been affected by plastic waste, and many millions of marine animals killed each year as a result.

Resolving this issue requires more than simply refusing a plastic bag in Sainsbury’s or dinking out of a soggy cardboard straw in Spoons. Although these actions are commendable and should not be dismissed, there is so much more that we could do - and it’s easier than you might think!

Alongside a range of businesses, charities and causes, from beer to sanitary towels, our three guest speakers are sure to inspire you and show you how easy zero-waste can actually be.

Elsa Webb, a third-year Bristol student who has been living a zero-waste lifestyle for the past two years will be revealing some easy tips and tricks for reducing your plastic waste. Jasmine Tribe, the Campaigns Coordinator for the non-profit organisation ‘City to Sea,’ will talk about campaigns to stop plastic waste from entering the sea from the source. Finally, Sarah Smith, from Bristol Cloth Nappy Library, will be discussing reusable nappies, amongst many other exciting things!

Are you planning on taking part in Sustainability Month? Epigram wants to know - get in touch!

Let me wear my leggings in peace

The best cocktail spots in Bristol