1 February 2019; Bristol came to a standstill. Amidst the snowy treacherous conditions, Bristol’s community came together. All for one reason, and it wasn't the Beast from the East. Instead our saving grace, the Duke and Duchess of Sussex: Prince Harry and Meghan Markle.

Anyone who knows me well will be aware of my obsession with the British Royal Family, I even share a birthday with Prince George (obviously planned by K-Middy). So hearing that our most show-biz Royal couple were heading to Bristol, I knew I had to get there. (That and my mum telling me she’d be disappointed in me if I didn’t go).

In order to avoid being black-listed by my family, I began finding the details of their visit. Everywhere saying the same, Harry and Meghan would be in Bristol seeing the public in Kings Street, heading into the recently renovated Bristol Old Vic then to the wonderful Empire Boxing Gym.

Unfortunately, only the press and security were told the actual arrival time of Harry and Meghan. The rest of us mere mortals were told ‘late morning’. After many frantic calls with my mum we concluded this would mean between 10-11:30. By methods of royal deduction to beat the rush of royal fanatics (like myself) and get a good spot I aimed to get there for 9. After trekking and sliding down Park Street I was there, right opposite Bristol Old Vic - there’s no way I wouldn’t get to see them!

By 9:30 my toes and fingers were beginning to go numb, clutching to my Costa hot-chocolate for dear life. Passers by continued to stare and wonder why on earth someone would be standing outside a theatre in weather resembling a blizzard. Fair enough. At 9:45 I was joined by the press who arrived to get their prime positions. Sure, they’d arrived 45 minutes after me to get just as good a view, but I was still there, Harry, Meghan and their baby were due and I was there front and centre.

I began wondering if people knew something I didn’t, the streets still remained fairly deserted. Surely everyone was as excited to see Harry and Meghan as I was. After chatting to some journalists (not to boast but I was on Japanese TV, a random radio station and in the background of a LOT of pictures) they revealed the Royals were due around 11:15. Still an hour or so to wait. Fine. I didn’t have a hat or gloves and it was still snowing but I remained optimistic.

Following many a phone call from my excited grandparents asking if I’d seen them yet its fair to say I was looking like a drowned rat. The only thing getting me by was the atmosphere, by 10:15 quite a few royal fans had gathered, each with their own story to tell.

All was fine and dandy until disaster struck. At around 10:30 (45 minutes until Royal touchdown) the police revealed the meet and greet would be taking place on the opposite side of the road. To my horror that side of the street was already lined, so clutching my Sainsbury’s flowers I ditched my pride of place spot similar to how Prince William’s hair has ditched his head. After passively aggressively moaning about my lack of sightline on this side of the road despite waiting for over 2 hours now I managed to nab a spot at the front of the barrier with a few of the other long-serving royalists. It just shows you how even in these harsh times (Brexit) the British public pull through. It was fine though, Harry and Meghan would be there in 15 minutes. 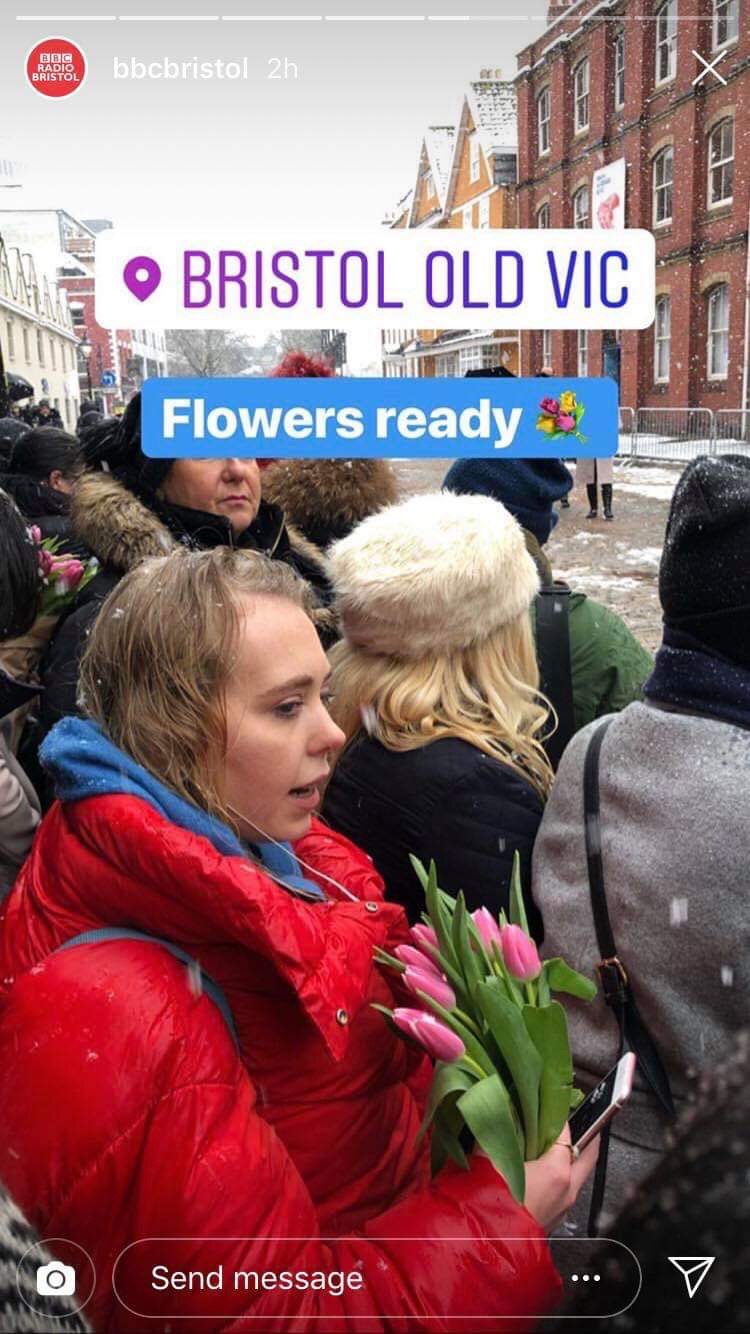 Less than 10 minutes later, a policeman dropped the bombshell that Harry and Meghan would be splitting apart, Harry meeting opposite the theatre and Meghan the side I had just moved to. To describe myself as feeling tortured would be an understatement. Meghan Markle, the feminist icon, award-winning actress and now royal on one side, or the people's Prince on the other. Rather than trying to make a decision I stayed put, my feet had frozen the ground and the thought of moving made me want to cry.

As time passed we started getting nervous if they would show, as 11:15 came and went there was a lull in energy. Just as I was losing the will to live Peaches Golding (the first black, female Lord Lieutenant) began doing the rounds to gather morale. She told me I looked 'moist'. Still not sure how I feel about that. It is never acceptable to use the word moist. Especially to describe appearance.

Nonetheless, 15 minutes late, a stately (because it had a special number plate) black range-rover pulled up, the crowds erupted and there they were. The Duke and Duchess of Sussex. And boy, did they look radiant, Harry adorned a grey suit and Meghan had wrapped up warm in a long black coat disguising her baby-bump. And no, Meghan did not wear heels in the snow for the many asking. As Meghan and Harry made their way along their respective lines of adoring public each took time to talk to every individual, thanking them for waiting as their train had been delayed. If the royals can’t even count on trains then who can. In a fleeting moment Meghan had greeted me, took my Sainsbury’s flowers, chatted and gone.

After giving a few more casual interviews (even though BBC Bristol definitely did me dirty) I embarked back up Park Street fully prepared to accept death in the cold. Was it worth it? Absolutely. The atmosphere was great, even in the cold it was full of chatter and excitement. Love them or hate them, the Royal Family are able to bring people and communities together in a way no-one else can. I for one will always be there, rain, snow, or shine.

Reporter Isabella pictured in red, in her words, looking like a 'drowned rat'

After scalding my skin in a hot shower and a lot of tea I had recovered from my ordeal. It was exciting, I had succeeded in my quest and without getting arrested - (I was voted most likely to get arrested for stalking Prince Harry in my school leavers book). Just can’t wait for the next Bristol Royal Visit.

Featured Image: Many thanks to Chelsea Alventosa @chelsealventosa (instagram handle) for her image

X Factor auditions to return to Bristol in March