Slapstick and No B/S! are film events to brighten up any exam period

Slapstick 2019 and Come The Revolution’s latest screenings in their No B/S! season are opportunities to take a break from revision and work to enjoy comedy cinema during a high pressure study period.

For many students, the exam period between January 14 and 25 can be a stressful time. Even for students who don’t have exams, there are coursework deadlines en masse to worry about. After the holidays, the task of remembering what day it is is difficult enough, let alone rediscovering any studying routine. It’s easy to forget you can still enjoy breaks which don’t involve coffee, so-called ‘meals’, or staring into deep space while you scream internally.

All the above makes it even more important to spend time outside your stale study environments to refresh yourself and vary your days. Watching films is an easy, passive activity which many use to escape the assessment blues and comedies especially put a smile on our faces in tough times. Thankfully, Bristol is a cultural hub and there are two events which could be perfect respites from intense University work: Slapstick 2019 and No B/S!.

Slapstick 2019, running January 16-20, is the 15th edition of the festival, which was originally started to celebrate silent comedy. Now, it has expanded to include all aspects of classic comedy and is hosting 33 events at both Watershed and Bristol Old Vic this week. A full schedule can be found on their website. 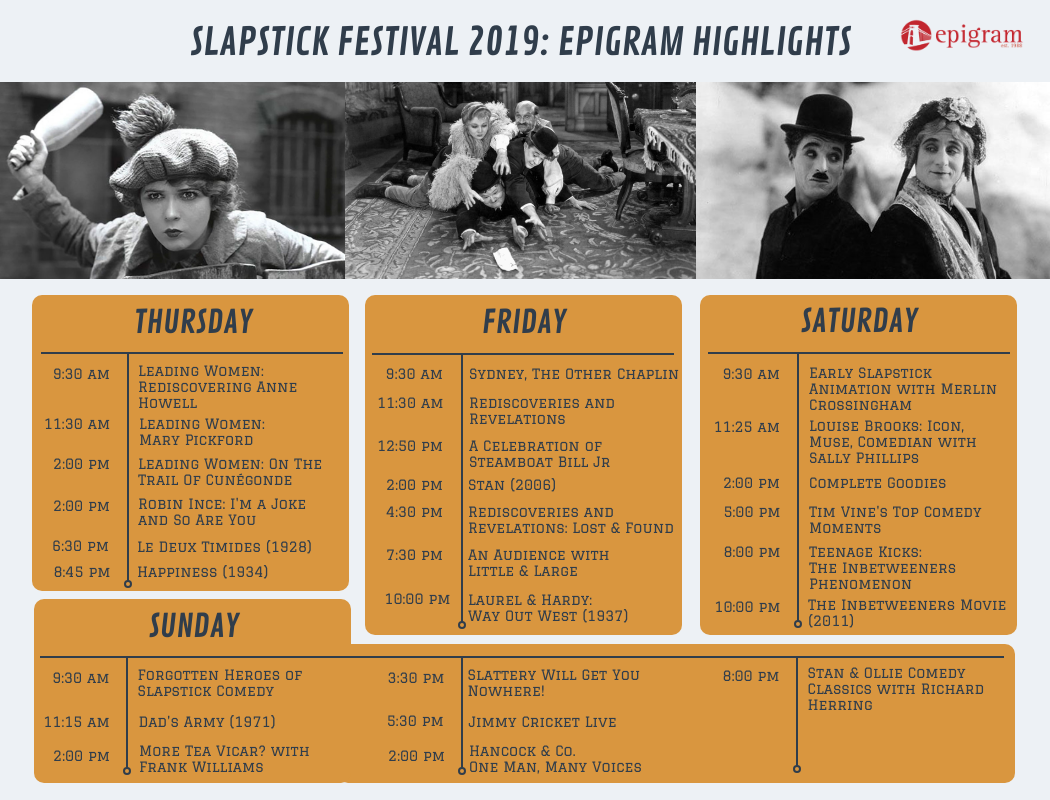 The highlights of the festival programme include an audience with iconic double act Syd Little and Eddie Large, aka Little & Large, on January 18, a chat with comedian Tim Vine on January 19, and a screening of The Inbetweeners Movie (2011), also on January 19, preceded by a conversation with the show’s creators Damon Beesley and Iain Morris, and actor Joe Thomas, who plays Simon Cooper.

Come The Revolution is a Bristol based collective of curators, programmers and creatives committed to exploring and challenging black life, experience and cultural expression through cinema. Their latest season, No B/S!, has already featured events on Black Satire, Black British TV Comedy Legends, and is part of the British Film Institute’s (BFI) Comedy Genius, a celebration of film and TV comedy ongoing throughout the winter.

IT'S HERE!!
'NO B/S!' is a season of films and events that celebrate the many tones of Black comedy. Our season is part of #ComedyGenius, a nationwide celebration of comedy on screen. Screenings throughout December and January. https://t.co/yT7UTopnrM#BFIComedy #ComedyGenius pic.twitter.com/FSXiqkKUKy

On the significance of the season, Come The Revolution founding member Dr Edson Burton said: ‘To survive the absurdity of racism, poverty and conflicted community loyalties you have to laugh - no wonder the Black comedian is entertainment royalty. We are beset on all sides by societal demands, comedy is where we can be real and laugh. I can chart my life’s journey through laughter via shows like Desmond’s, The Real McCoy, and stars such as Will Smith, Whoopi Goldberg, Eddie Murphy, and Michaela Coel. I just want to share that journey with Bristol.’

With all this comedy being hosted in our ever-wonderful city, it’s almost like the event organisers knew students would be in dire need of a pick-me-up this month!

Good luck with your exams and assignments, and remember to take sufficient breaks!

Nancy Roman’s legacy: champion of women in science and “Mother of the Hubble”