China Lands on the Dark Side of the Moon

3rd January marked the historic landing of China's Chang'e 4 spacecraft on the dark side of the moon.

On the morning of the 3rd of January 2019, China’s National Space Administration (CNSA) celebrated as the Chang’e-4 space probe touched down on the Moon’s Von Karmen Crater. This unmanned mission to the Moon can be seen as a milestone in space exploration, as it is the first successful landing on the lunar south pole, which has come to be known as the Moon’s mysterious ‘dark side’. 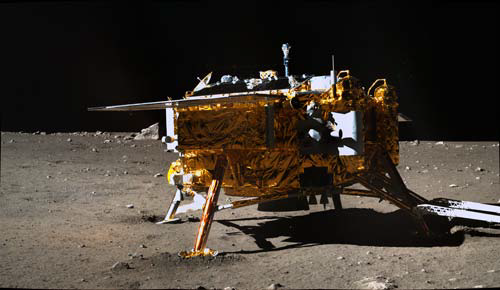 Due to the Moon’s orbit around Earth, and a phenomenon known as ‘tidal locking', the lunar south pole never faces the Earth. This makes communication between Earth and space crafts in the area extremely difficult, which is why no previous space mission has successfully landed on the lunar south pole. Given these technical challenges, as the Chang’e-4 neared the Moon’s surface it could no longer be controlled remotely, instead operating independently during its descent. This autonomous landing can be seen as a ground-breaking feat.

The challenges faced in landing a space craft on the lunar south pole have rendered the landscape largely uncharted and a key area of interest for space agencies across the globe. Though remaining largely a mystery, the lunar south pole is thought to be a potential hotspot for scientific interest: NASA has described it as “one of the most compelling places in the entire Solar System”.

Space agencies believe that the area is a potentially unique location given its shadowed position to the Earth; radio astronomy investigations can be performed free from the radio ‘noise’ transmitted by Earth. Scientists are also hopeful that samples and data collected from the area will inform them about the Moon’s ancient geological history and, potentially, earlier solar systems. These research topics make the Moon’s largely unstudied ‘dark side’ a sought-after area of global scientific interest.

Alongside data collection, the Chang’e-4 will attempt to cultivate life on the Moon. The Chinese lander has six species of Earth-dwelling plants aboard the spacecraft: cotton, rapeseed, potato, fruit flies, yeast, Arabidopsis (a model plant), along with living silkworm larvae. The researchers hope that these resources will be used to begin a "mini biosphere" on the Moon, a body thus-far understood to be lifeless.

Given that the European Space Agency believes the lunar south pole to be a “possible future location for human outposting”, the decision to research the feasibility of life on the Moon’s dark side reveals both scientific and geo-political interest. The recent success of the Chang’e-4 can be seen as a demonstration of China’s dominant position as a space power, successfully completing work that no other mission has managed to accomplish, and places it as a central event in the ongoing quest for civilisation beyond Earth.

The BBC have reported that the CNSA stressed that this work aims to furnish a “dream of a human community of a shared destiny”, and the importance of international collaboration in outer space research. However, the USA has reportedly remained hostile in communicating with the CNSA, and resistant in employing the use of any of the data provided by the Chang’e-4 mission, despite its scientific significance.

Despite the historic success of recent space ventures from agencies working across the globe, recent events reveal that tensions among space agencies seem to remain rife and politically charged. As the new frontier for potential future human life in outer space is ever nearing, a question arises: how will civil histories continue to affect the ongoing and ever developing ‘Space Race’? Where does the power of politics lie within the frontiers of scientific knowledge, or should it be there at all?

Want to hear more about research like this? Let us know!