Bird Box success blind to its mediocrity, despite causing memepocalypse

The Netflix original has created a genre of online content and even its own ill-fated challenge, but it still remains an average, albeit enjoyable, film.

Nevertheless it managed to rack up over 45 million viewers within a week of released, making it the most watched Netflix original film yet (first seven days), and going by the social media buzz, the film’s progress shows no sign of abating. How then, has a film so mediocre garnered such a massive following in just a few days?

Conceptually, the movie could have been unique and fascinating. A strange being of unknown origin - whether it’s a demon, an alien or something else is never specified - makes those who looks at it kill themselves. The beings have triggered an apocalyptic situation, and this adaptation of Josh Malerman’s 2014 novel certainly had potential.

The lady from bird box looks like MJ 😭 pic.twitter.com/ijBCBvsf0c

Unfortunately for Bird Box, it was released in the same year as A Quiet Place (2018), a similar movie in concept. In A Quiet Place, however, the monster kills anybody who makes a sound rather than those who looks at it. On top of that, the two films feature similar plot points and explore similar themes – both feature a pregnant woman as its protagonist, both heighten tension by putting children in vulnerable situations and both heavily feature themes of family and motherhood.

It has led to accusations that Bird Box rips off A Quiet Place, despite the fact that the original concept for Bird Box comes from a book of the same name, released nearly five years before A Quiet Place. Nevertheless, with the heavy similarities between the two and the peculiar timing of the films release, one would be forgiven for thinking that a key reason for the success of Bird Box is that it has ridden on the back of A Quiet Place’s wave.

First there was A QUIET PLACE.
Then BIRD BOX.
Now get ready for... pic.twitter.com/GtMX7sCW0o

Sadly, Bird Box isn’t executed half as well as A Quiet Place. The film opens on a high, five years on from the apocalypse, with our protagonist, Malorie (Sandra Bullock), preparing the two kids with her for a dangerous journey down a river in the hope that they will find a safe haven. If they don’t follow her every word they will die, ‘if you take your blindfold off for even a second I will hurt you’.

The film then jumps back to the beginning of the apocalypse. After a brief introduction to Malorie’s sister, Jessica (Sarah Paulson), and the exposition that Malorie is pregnant, we are treated to a gloriously chaotic depiction of the mayhem gripping the streets as the suicides start. The sequence ends with Malorie being taken into a house occupied by a small group of fellow survivors, all after she witnessed Jessica take her life. From here the story splits into two interwoven sections: one following Malorie and the two children five years later and another following the eventual demise of the survivors accompanying Malorie at the beginning. 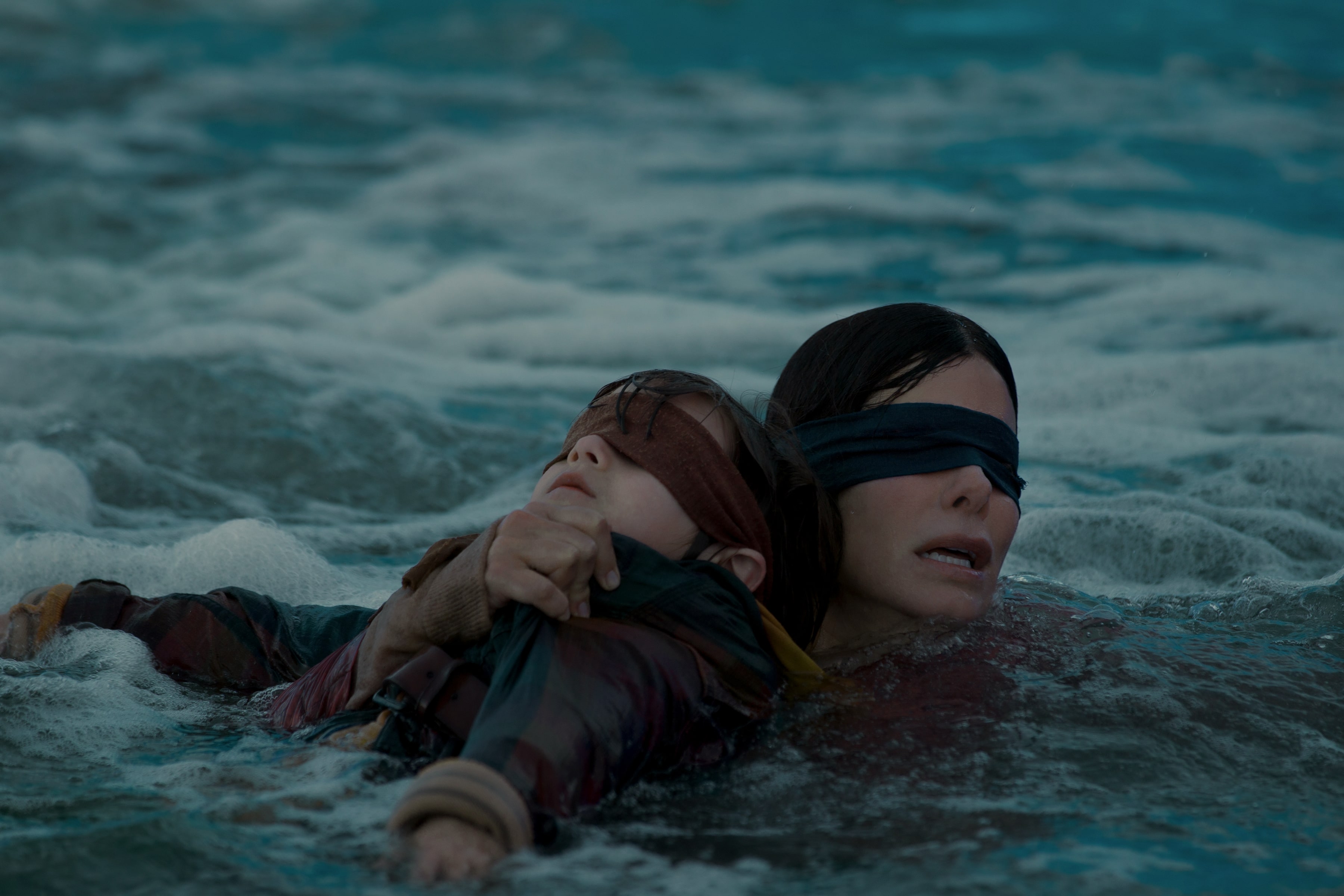 This is where the movie begins to fall apart. None of the early survivors are ever fleshed out and most of their character arcs reach incomplete conclusions. Weak dialogue, cheesy editing and some incredibly predictable plot twists combine to make this plotline of the film more funny than scary. In contrast, the other section features a decent performance by Sandra Bullock, which leaves you rooting for her and the two children through some genuinely tense moments.

Weirdly though, I still enjoyed Bird Box. Even the parts of the movie following those hollow survivors provide some entertaining moments. One memorable set piece, in particular, sees our protagonists having to navigate a car using nothing but its motion sensor technology. If you’re not expecting high art, then one half of the film provides the cheesy, light entertainment, whilst the other treats you to some surprisingly good performances and gets you on the edge of your seat.

Netflix warns viewers against Bird Box challenge meme: 'Do not end up in hospital' https://t.co/cm9r9JYlbP

The experience as a whole though never becomes anything more than mediocre. When all is said and done, Bird Box is an enjoyable film, but it definitely doesn’t live up to the hype.

What's your favourite meme to come out of Bird Box?