Yes, I am Pakistani and no, I’m not from the Taliban

I’m walking down Lexham Gardens with my headphones on, pacing my steps to the beat of ‘Chaiyya Chaiyya’ and imagining the lovely Shah Rukh Khan busting his moves on a moving train in Northern India. I think of a scenario where I do the same, but on London’s tubes. It’s been a month and a half since I moved to London to immerse myself in a year of Global Health and I’m proud to say that I have gotten the hang of the London underground. Suddenly, I hear a voice muffling over my headphones. I turn my head and see an old man standing next to a pile of bags, beckoning me. I take off my headphones and turn to him. He asks if I could help him put his coat on and pick up his two bags from the ground because his Rheumatoid Arthritis (a joint disease) and the cold weather making it worse, won’t let him bend down . Like the dutiful, 20 year old I am, I immediately help him put on coat and lift the bags off the ground. He looks at me closely for a bit and inquires, ‘What country are you from, girl?’. I smile and proudly say, ‘Pakistan!’. He’s a bit startled and nervously laughs and says, ‘Oh, so you’re part of the Taliban right’.

Now, a lot of thoughts run through my head in just the second I have before I am expected to give a response:

a) Should I go full Pakistani, brown girl and educate him on the low probability of me being part of the terrorist organisation that was involved in the 9/11 attacks or,

b) Should I laugh at his face, tell him how ignorant he really is and how he really needs to educate himself on Taliban is not equivalent Pakistan

But instead I do none of these things and simply reply, ‘No’ with a straight face, put on my headphones and walk off. This is an example of a little something known as ‘microaggression’. This is scenario is not an example of racism because that old man didn’t discriminate against me based on my skin colour, gender or sexual orientation. Racism is blatant; you hear or see it instantly. The thing about microaggressions is that its subtle. If you’re a victim of microagression, you may even question whether the remark is something to get heated over. People, (often white people), who commit microaggression often do it unitintentionally and believe what they’re saying is acceptable. And this is exactly why remarks like being the Pakistani member of the Taliban, often go unchecked. But let me be clear-a microaggression is far from acceptable. It is an insult deeply rooted in racial prejudice. 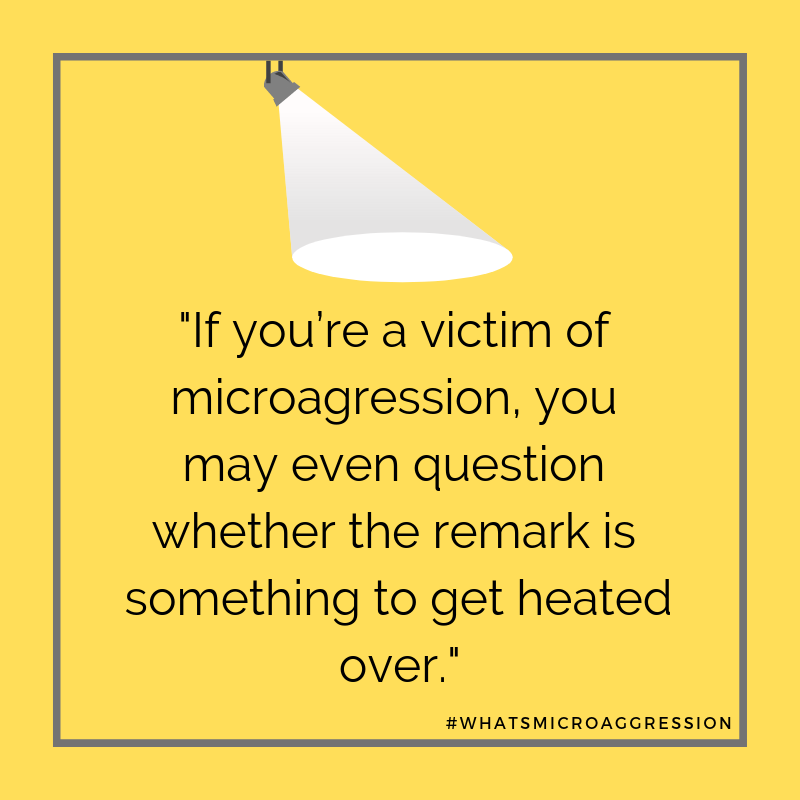 For me personally, microaggressions was not only a new term in my vocabulary but sadly a series of experiences. Growing up in Karachi, Pakistan for 18 years before moving to Bristol, UK was like living in a little bubble where I was surrounded by brown, Muslim (majority of the times), and Pakistani people immersed in our cultures and traditions. Its safe to say, that moving abroad for higher education, especially to Bristol, the whitest of white cities, wasn’t the easiest of transitions. Bristol’s a city where your brown face, black hair and thick eyebrows really stand out; especially when you’re sitting in LT 1.4 not only being lectured by white professors but are surrounded by white faces sitting next to you. After 2 years in Bristol, if you ask me about micro aggression, I will probably not just tell you the root and origin of the word but a summary of all research done around it.

Let’s make this read a little interesting, shall we? I’ll give you a list of remarks I have received from people during the 2 years I have spent living in Bristol. To make this more fun, I’ve added remarks I would have said, given I have the guts to say it: 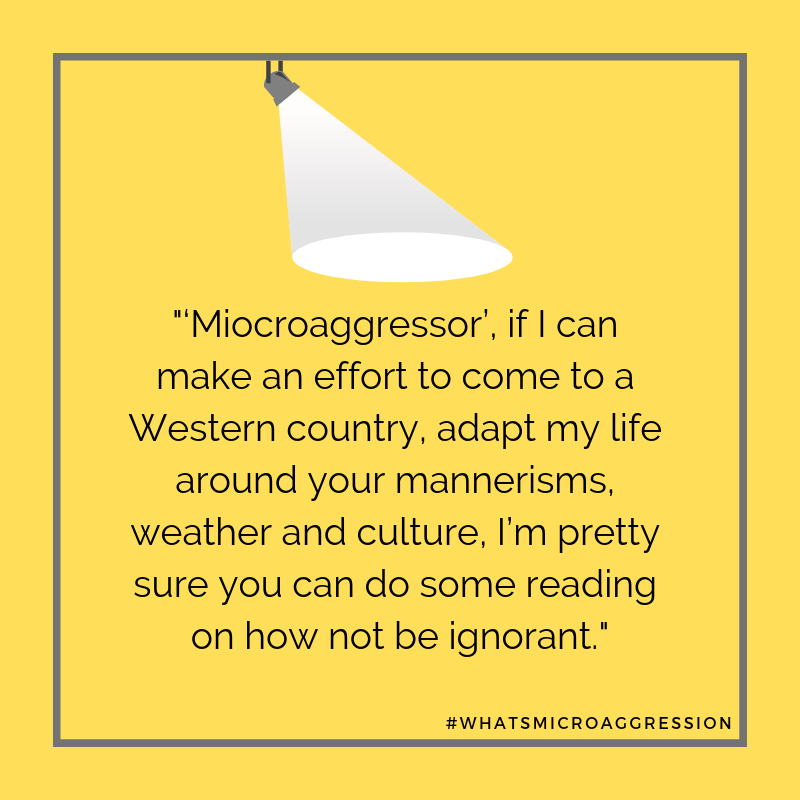 My advice to people who have committed a microaggression unknowingly: educate yourself. Move out of your comfort zone and learn and interact with people from different races and cultures. Don’t perpetuate stereotypes about People of Color (POC) you read in magazines or watch on TV shows. Frankly, it’s cool to be woke and a necessity in the times we are living in today where misogynists and xenophobes are sitting in the White House.

‘Microaggressor’, if I can make an effort to come to a Western country, adapt my life around your mannerisms, weather and culture, I’m pretty sure you can do some reading on how not be ignorant.

Shoplifters deserves all the accolade and awards