Francesca Frankis reviews The Japanese House at Thekla, with photography from Matt Alderton

The Japanese House, aka the stage name of 23 year old musician Amber Bain, announced a few weeks ago that her first full length album Good at Falling would be released at the beginning of next year. Despite this being her first album since her ascent to the indie scene in 2015, Bain has released a string of EP’s over the past few years. The most recent singles from the new album give us a taste of what is to come; ‘Lilo’ and ‘Follow my girl’, truly exampling how Bain has accelerated as an artist whilst keeping true to her unique sound. Since last seeing her back in 2016, touring with the likes of the 1975, The Japanese House was at Thekla last Thursday headlining her own tour; the night was a reflection of an artist amidst a transitionary period, curating her individual sound in the build up to her first album release. 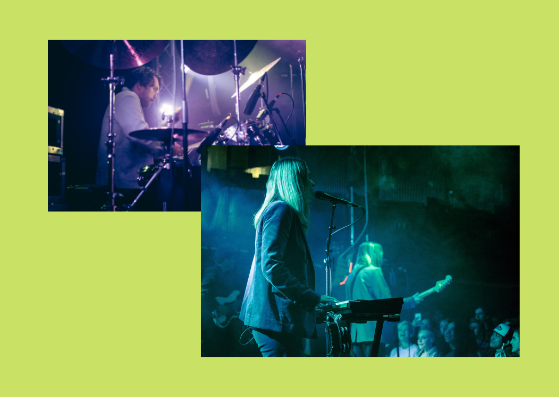 With her and her band all dressed in vintage suits like something out of an early episode of top of the pops, Bain opened her set with a punchy rendition of ‘Face like thunder’. There wasn't much of a pause between songs, and after a quick guitar switch moved onto the slower soothing sounds of ‘somebody you found’ and ‘swim against the tide’. The crowd was a good mix and proved the appealing nature of her sound to the masses, the atmosphere ensured everyone was fixated on her presence, glancing up as if she were graciously singing some sort of lullaby to us all.

The middle of the set was dedicated to the unreleased synthy track titled ‘You seemed so happy’, embedded in between dynamic recent singles ‘Lilo’ and ‘Follow my girl’, all snippets from the upcoming album. Along with the band, Bain was able to transition straight into one of her earliest songs ‘Still’; which, despite being four years old hadn't lost any of it’s artistic value alongside her newer tracks. What followed was a mix of her recent EP’s, grooving between the likes of of ‘saw you in a dream’ that took on a more acoustic sound in its live form, and the bittersweet track ‘leon’. As the end of the gig drew to a close, Amber gave us another taste of what to expect from ‘Good at falling’, that included ‘Intro’, a loud eclectic mix of synths and vocal effects, with an extremely auto tuned vocal part. The set finished with ‘Clean’, for me a true archetype of The Japanese House’s dreamy sound.

Its hard to ignore how far The Japanese House has come since the release of her first EP ‘Pools to bathe in’ back in 2015. In many ways she is a world away from the young musician shrouded in mystery that she was back then, now more settled and at home in her musical flair. Yet her old sounds are the perfect predecessors to the music she is releasing and performing now; as if they were all written with the intention of her latest tracks being exactly what they are.