The Ballad of Buster Scruggs brings Western mania to Netflix

The small screen of Netflix is the host of six glorious tales in one film as the Coen Brothers continue to produce some of the best cinema of present times.

This past month has certainly been alluring for fans of the American West. The Coen Brothers’ modern Western The Ballad of Buster Scruggs follows video game Red Dead Redemption II in a still vastly popular genre that refuses to lay low. So too does the movie become the third Coen Brothers modern western in just over a decade, beside True Grit (2010) and No Country for Old Men (2007) in their expanding filmography.

There is clearly something about the frontier that captures our imagination even today. The rolling hills, boundless plains and towering mountains of its terrain serve as the territorial backdrop to the ‘American Dream’, which we catch glimpses of throughout Buster Scruggs. Aptly, we are introduced to this adventure with the camera diving into pages of a worn storybook. The book rests in a tranquil setting, the creak of an old wooden chair reminding us of that all too well-known cliché of fireplace reading.

That the Coens introduce several clichés, particularly the wild and implacably vicious Indian, into the forefront is of little concern though. This anthology is as concerned with our imagination of the frontier as it is the reality. Tim Blake Nelson, playing the film’s titular character, serves as the perfect example of this. He is flamboyantly happy go lucky, capable of the absurd yet impressive talent of both riding a horse and strumming on the guitar - his dazzling white outfit completing the scene.

Unlike cowboy singers like Rex Allen, however, he balances his love for music with being a ruthless killer who is impervious to the excessive gore of his violence. Before the close of this first tale, you wouldn’t be wrong to assume the feature would continue in its Looney Tunes-esque style. But the film brings us back to the bleak reality of life for those who meddle in the gunslinging west – death waits around every corner. As Scruggs admits after being defeated: ‘You can’t be top dog forever.’ 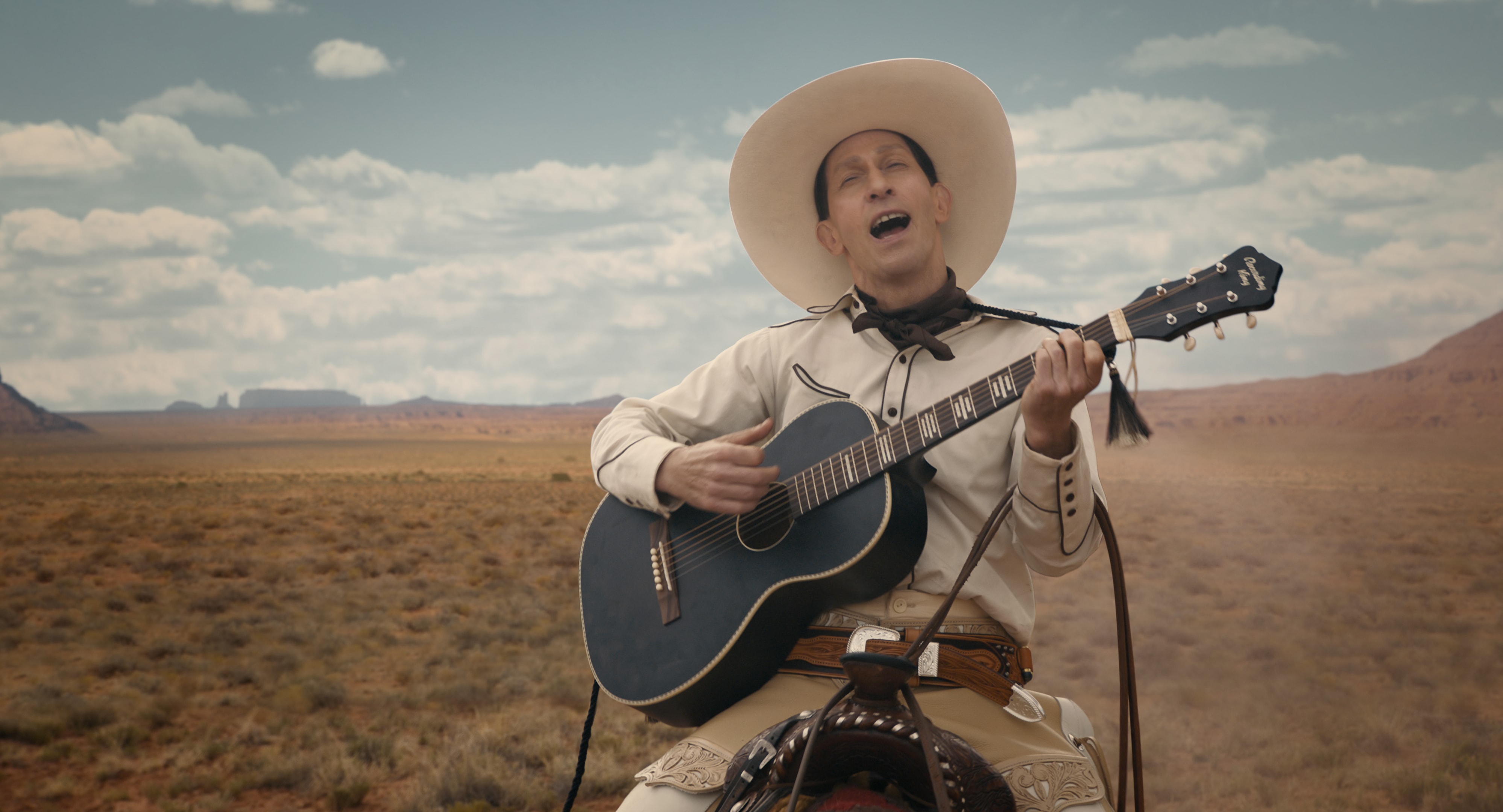 This is the front-piece, and one of the strongest of six short vignettes which introduce us into the rich, and often bleak landscape of late 19th century America which the Coens have attempted to illustrate. In fact, all six stories tackle the often cruel and unjust nature of death.

‘The Gal Who Got Rattled’ tells of a love-story gone wrong in which a simple misunderstanding ends the poetic romance between Alice Longabaugh (Zoe Kazan) and Billy Knapp (Bill Heck). ‘Meal Ticket’ stars Liam Neeson as Impresario, portraying both the humdrum of showbiz and its darker side when hunger looms. Finally, ‘The Mortal Remains’ wraps up with an ominous coach trip of five strangers.

The Coen Brothers’ talent for both crafting great characters but also casting them must be applauded in this episode, with the Englishman (Jonjo O’Neill), Irishman (Brendan Gleeson), Frenchman (Saul Rubinek), Lady (Tyne Daly) and Trapper (Chelcie Ross) all finely suiting their roles and sustaining the film’s vigour during the finale. The pattern of death is broken before then however with the best of the set. 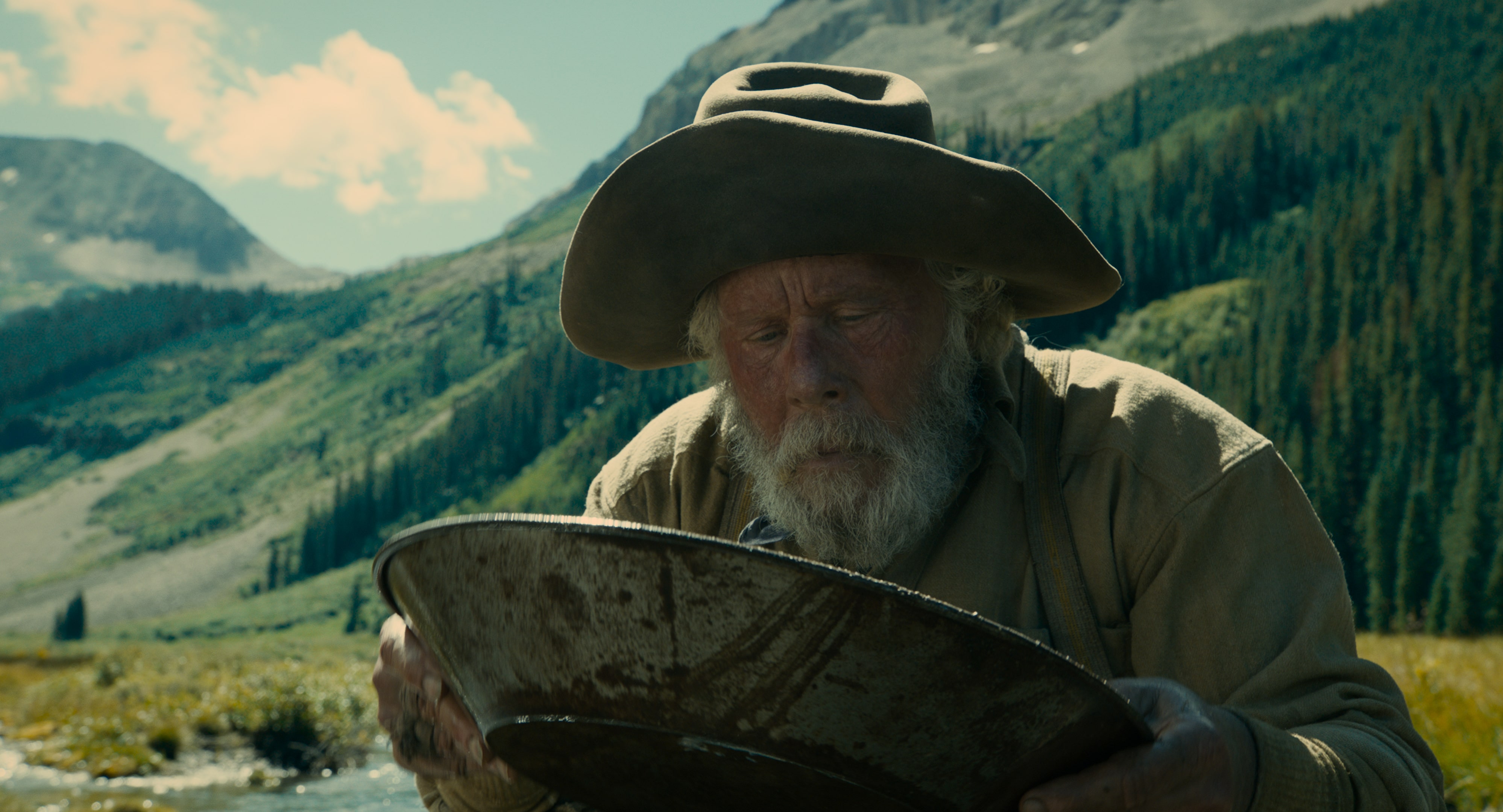 ‘All Gold Canyon’ follows singer-turned-actor Tom Waits as a lone, elderly prospector in his attempts to strike gold in California. Reminiscent of the stereotypical gold-miner pictured on Golden Nuggets cereal packets, the miner refers to the gold he’s seeking endearingly as ‘Mr Pocket’. Again, the story threatens to turn sour when a shadow against the treasure trove reveals a young boy has been lying in wait all along to steal the riches. Fortunately for the audience, in this tale, perseverance rings true.

As usual, critics of the Coen Brothers cite issues of pacing and abrupt endings as the primary issues with The Ballad of Buster Scruggs. Yet, those who appreciate the unexpected will be left satisfied rather than bewildered by the many turns in its narrative. It is a typically, and brilliantly, stylised Coen Brothers flick and offers Netflix the allegiance of two of the best in the game in their prime. It’s only a shame the astonishing visuals were scarcely accessible on the big screen.

Which of the vignettes in The Ballad of Buster Scruggs was your favourite?

We get it, you vape.