The vinyl revival is in full swing in Bristol. Here's our guide to the city's best crate digging spots...

Little over two years since North Street’s Friendly Records opened its doors, it has already become a favourite spot for many a Bristol music fan. The shop stocks both new and used vinyl, and also carries some CD and cassette releases.

The love and dedication of namesake and owner, Tom Friend is clear: the shop is beautifully set up and its atmosphere is - as the name suggests - very friendly.
Whilst April’s annual Record Store Day has faced criticism in recent years for having lost its soul and having become more about big label reissues, its spirit is alive and well in the Bedminster shop.

This year, Friendly Records marked the occasion with a ‘Record Store Weekender’, featuring a lineup including a live performance from Snails and a DJ set from local legend Big Jeff 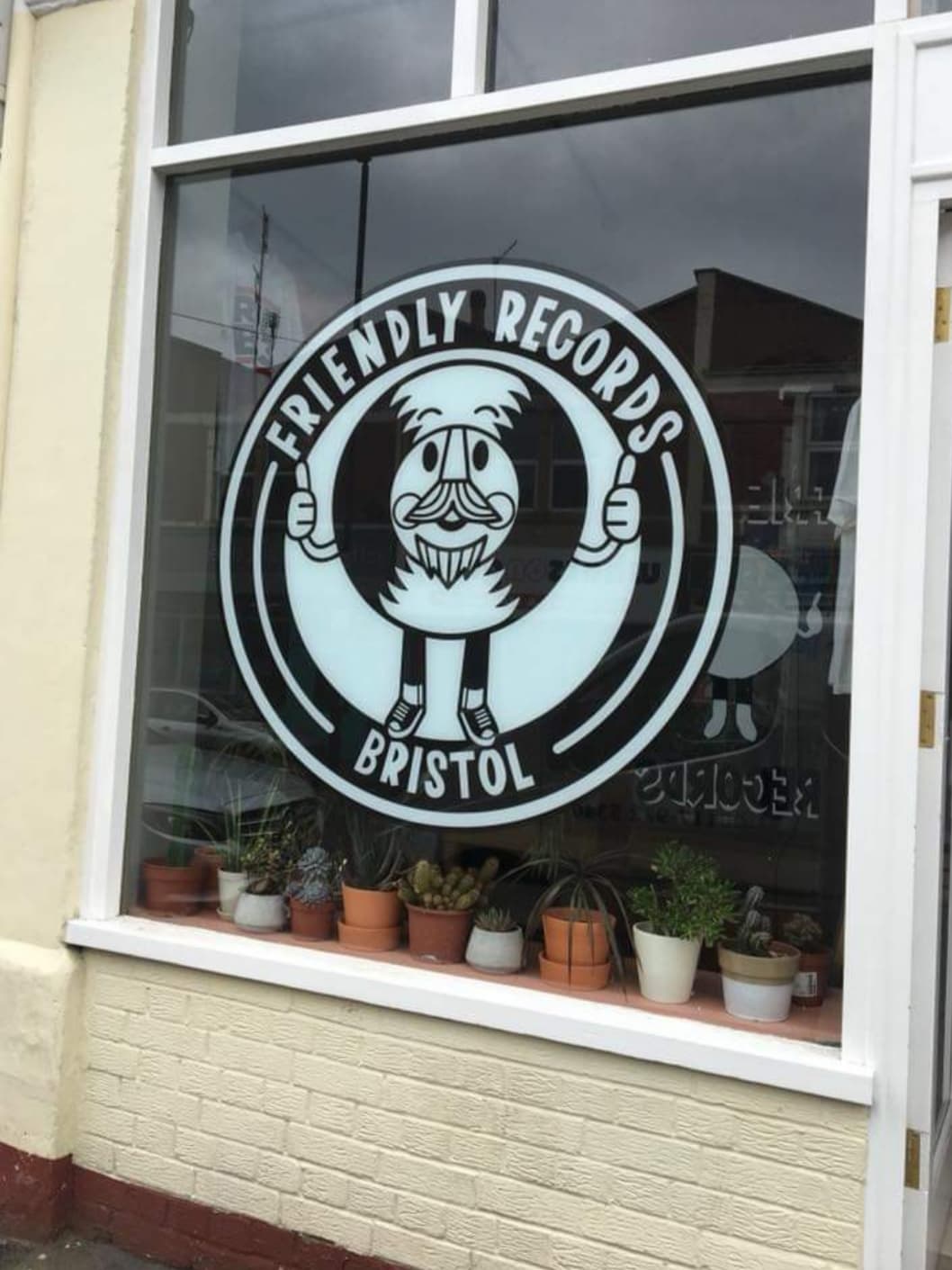 Nestled in the heart of Bristol’s bustling centre, Rough Trade is an accessible hub for music geeks, book fiends and cafe connoisseurs alike. Glossy, sardine-packed records smothered by cellophane sleeves line the industrial shelves of the store’s immediate layout. From Solange Knowles to Led Zep to Snoop Dogg, Rough Trade offer a generous choice of genres and artists, old and new, catering for all musical preferences in excess.

Entering cafe-side, or simply moseying through the aisles you’ll encounter tables stacked with coffee-table worthy literature. Quality background music, warm-mannered staff and like-minded customers shuffling around cultivates an environment in which it’s easy to lose yourself flicking between pages and browsing labels. Rough Trade are an established brand, and rightly boast that their stores provide ‘a shared place of discovery and congregation’. Enjoying a drink at the cafe-bar and attending a post-opening hours gig are perhaps the best ways to exploit this sentiment.

Despite being less than a year old, the store has seen a wealth or artists pass through their doors, and are continuing to welcome bands such as Eliza and The Bear and Frankie Stew and Harvey Gunn in the upcoming weeks. Provided by a company loaded with history and valuable industry experience, Rough Trade Bristol qualifies more as a destination than a record shop. 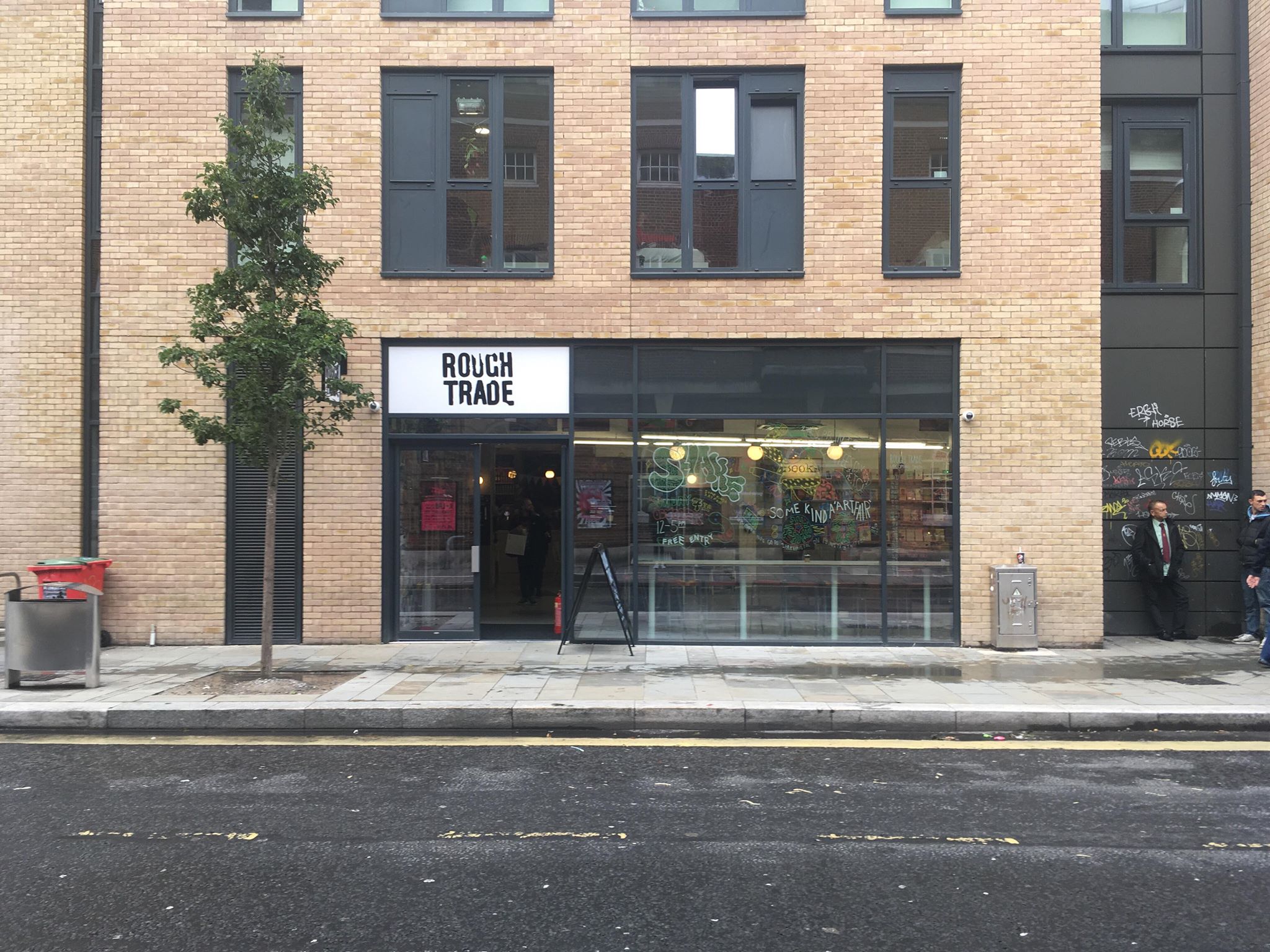 The Centre For Better Grooves

The mission of the Centre for Better Grooves is pretty simple: stocking a great selection of vinyl including some of the finest jazz, soul and funk records out there. But the strict genre of the record isn’t as important as whether it’s got the ‘groove’ and the shop definitely has.
Owner, Gordon Montgomery, is a real veteran of the UK record shop scene having founded chain Fopp (now owned by HMV) and been a director of Rise (whose Triangle store became Rough Trade Bristol). With the Centre for Better Grooves, however, you get the impression that Montogomery has given up the chain record shop life and is now much more interested in providing a small but personal experience for his customers, with his curation at the fore.
Now based within Gloucester Road’s Paul Roberts Hi-Fi, the shop’s small size is more than apparent. The Centre for Better Grooves definitely proves that you don’t need mountains and mountains of stacked vinyl to be an excellent shop and it definitely is.

PK Music Exchange, neatly slotted into the array of shops which make up Gloucester Road, advertises sell or trade of instruments, equipment and all things musical. The window is filled with various gadgets including a display of guitar pedals: a perfect way for any developing musician to evolve their sound without bearing the brunt of branded prices. The exchanges offered by PK also make it easier for musicians to build the rig they want.

The insides are lined with PA systems with various instruments hanging from the walls, circling an impressive row of vinyl in the middle. Their record collection is massive, and something to be admired as I was met by a sea of vinyl on a recent visit to the store.

The collection encompasses all manners of tastes and genres, from The Beatles to Beethoven. The collection even spills over into an added upstairs room. A ‘must visit’ for anyone looking to buy or exchange in the music trade. 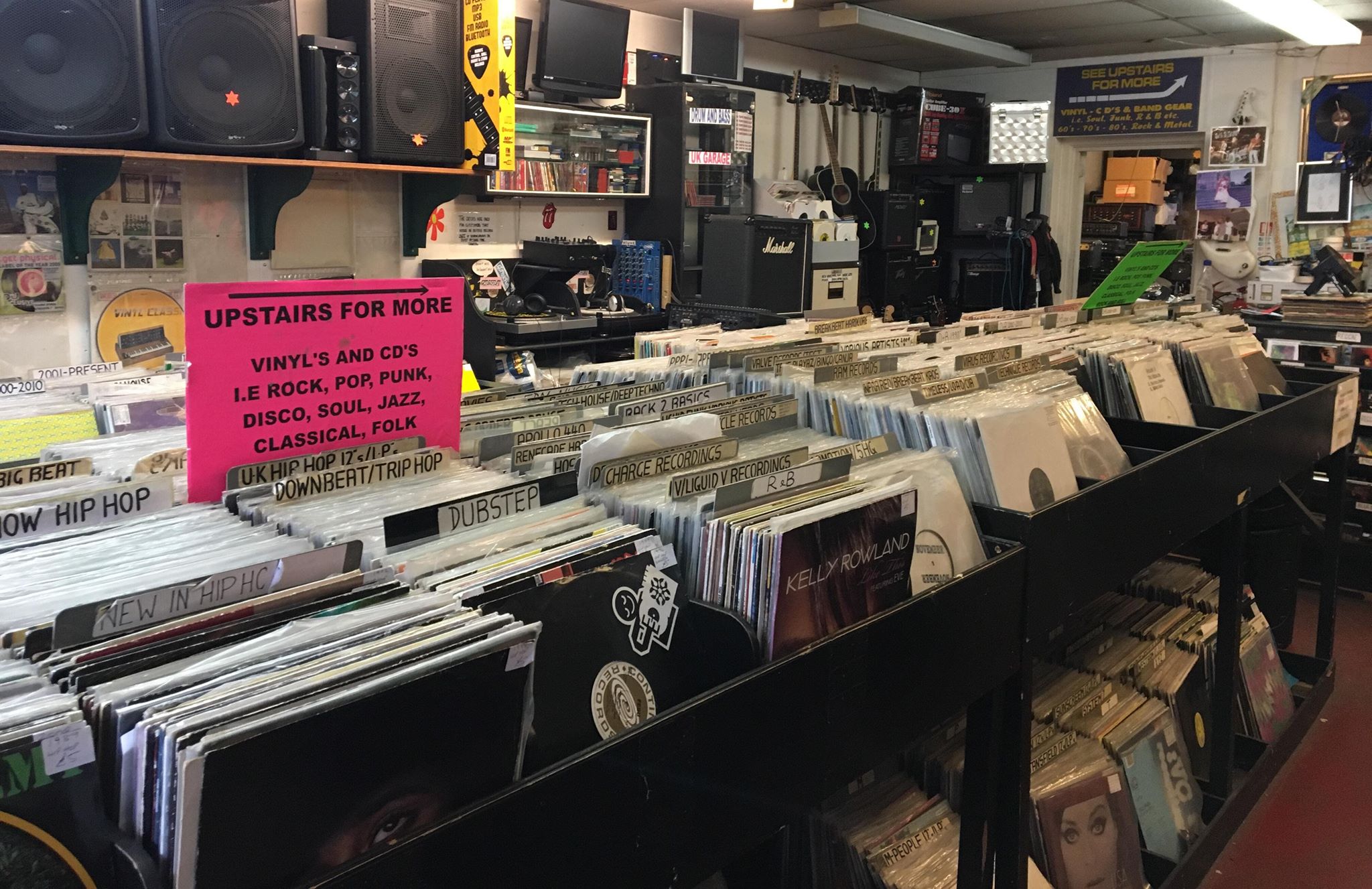 Idle Hands began life as a record label started by Rooted Records employee Chris Farrell, and Punch Drunk owner and Bristol underground legend Peverelist. Following Rooted’s tragic closure in 2011, Farrell decided to expand the label into a store, in a bid to ensure that there would be an institution representative of Bristol’s forward-thinking dance music scene once again.

In the years since, Idle Hands has established itself as the centre of Bristol’s underground electronic music scene, and an internationally recognised champion of boundary-pushing dance music. Overseen by the watchful eye of Chris Farrell, the diversity of records on offer is reflective of the label’s highly impressive back catalogue: grime, drum and bass and heavy-lidded techno happily sit alongside dubbed out house and serene ambient cuts.
However, although it has primarily built its reputation as a dance music specialist, the store caters for broader tastes. The store is also a treasure trove of forgotten dub 7’’s and dewy-eyed northern soul, and it features a “Bristol Music” section stocking presses of essential classics from the South West: seminal records from the likes of Smith & Mighty, Portishead, and Massive Attack feature in abundance amongst the shelves.

The store acts as a communal hub: it is the place where stalwarts of the Bristol scene come to do their digging, and it maintains an incredibly un-pretentious, welcoming feel. This is due in no small part to the kindly attitudes of Chris Farrell and his staff: Farrell has just as much a knack for picking great people as he does for picking great records. Former employees include Shanti Celeste, Kowton and WILF, whilst current employees Sam Hall, Yewande Adeniran (Ifeoluwa) and Sam Burke (Burke) are highly respected DJs, label owners and events curators in their own right. With so much collective expertise behind the counter, each trip becomes an opportunity to broaden one’s musical horizons: it is rare to walk away from the store without discovering something new.

The store is also the site of frequent in-store sessions, with the likes of Machine Woman, Giant Swan, and Bruce all featuring in recent months. Come to these with an open mind and your preferred tinny of choice: you won’t be disappointed.

Cosies tonight @lowcompanyrecords vs us, see you there

What's your favourite record store in Bristol? Let us know...

Violence in films should not be censored out of fear