Rosamund Pike embodies the inspirational late war journalist, Marie Colvin, in this introspective biopic looking at the PTSD and alcoholism she suffered as well as the dangerous coverage she led in war-torn countries between 2001 and 2012.

New Yorker Marie Colvin was a frontline foreign correspondent for The Sunday Times from 1985 until her death, aged 56, in Homs, Syria in February 2012, covering earlier wars in Sri Lanka, Iraq and Libya. She was greatly admired by her peers and was rewarded for her courageous work with the title of Foreign Reporter at the British Press Awards in 2001, 2009, and posthumously in 2012.

Rosamund Pike seemed an unusual casting choice at the time - British, 30s, with a porcelain beauty - but in the role, she looks remarkably like Colvin and nails the gravelly Queens accent. Of course, there are a couple of clear visual identifiers to help the audience. One is the famous eyepatch, which Colvin started wearing after an accident in Sri Lanka in 2001. The other is the constant cigarette in between her fingers - she reportedly smoked 100 a day.

There is plenty more to the performance than the surprising visual similarities. There is an intense focus on the two contrasting worlds Colvin spent her life in: the warzones and the London high life. She bravely smiles and waves at the awards ceremonies, and chuckles loudly with a wicked sense of humour at the penthouse parties, but the frames also flicker between her London home staircase and Middle Eastern ruins. She keeps seeing a dead Iraqi girl lying on her king size bed. Pike has to manage these transitions, and she spent many hours talking to Marie’s real life friends to fully understand the variety of her personalities. 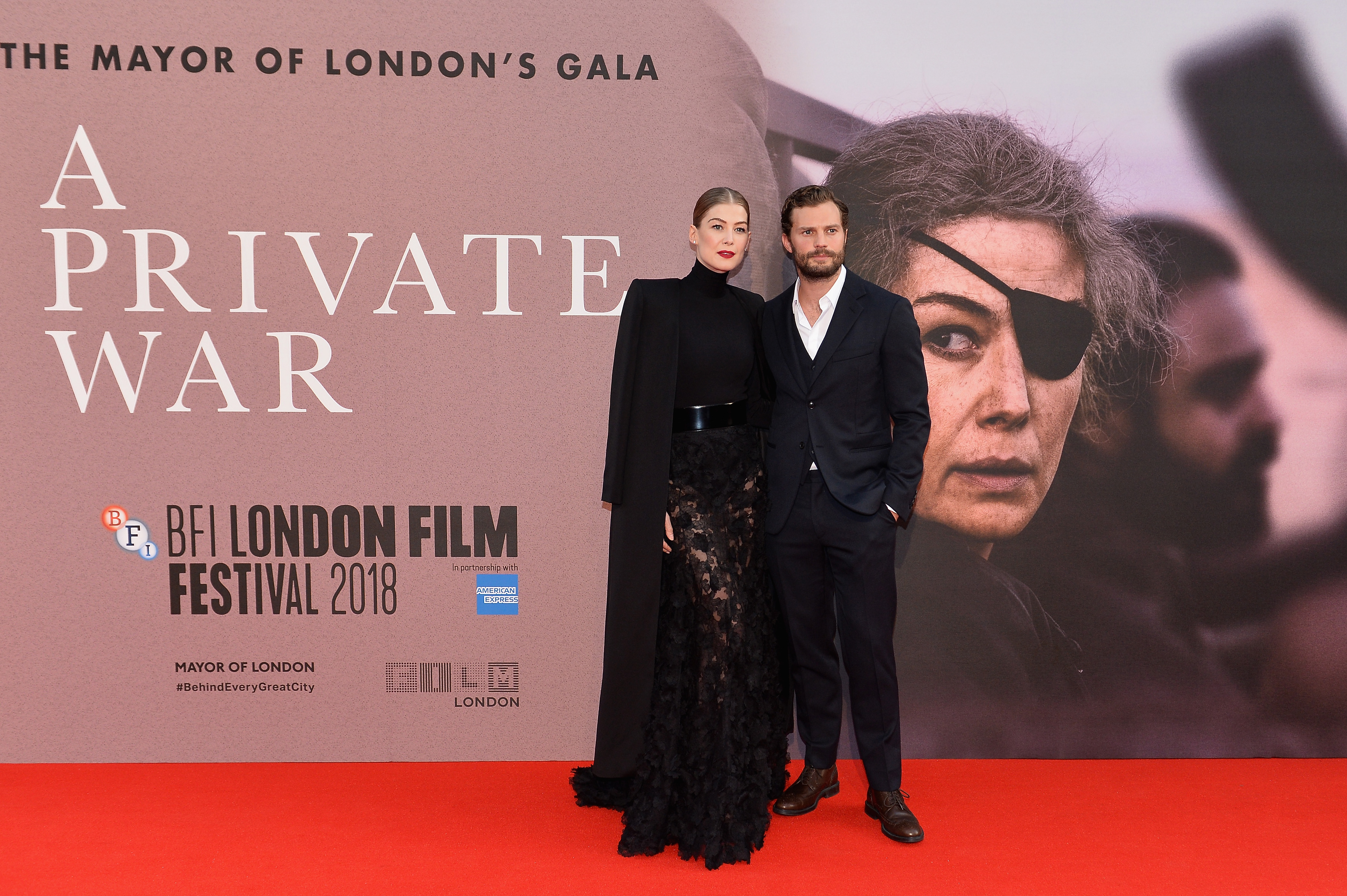 A Private War utilises many techniques to recreate the warzone situations as realistically as possible. Director Matthew Heineman before was exclusively a documentary maker and this is his first furore outside the format. It is a creative choice all the more fascinating for the release of another Colvin based film, the documentary Under The Wire (2018). They are both based on the literary account by photographer, and one of Colvin’s closest friends, Paul Conroy (here played by the far too attractive Jamie Dornan), who survived the explosion in which she died. In isolation, though, A Private War is a success - it accurately depicts the real tragedies of modern war and hits home hard with the audience.

At one point, Conroy (Dornan) is shown filming a dying boy in a shoddy Homs hospital after another day of Assad led attacks on the city and it is a multi-layered viewpoint into the hidden aspects of civilian impact. It transcends the types of images seen on social media, and it is tough to watch. They interview a fearful mother who says, ‘People are seeing us being butchered and they still call us terrorists’. Regular scenes of Conroy and Colvin hiding from gunfire in the back of pickup trucks are shown as if there with them. It all contributes to the inevitable, emotional climax of Marie’s death in a warzone she calls the ‘worst I’ve ever seen’.

The film has a clear structure, starting and ending with the same real voice recording of an interview with Marie Colvin over images of a devastated Homs, Syria. In it, she says her job was ‘like writing your own obituary,’ and one of the more telling statements she makes: ‘While there, I don’t fear anything. Fear comes later.’

In between the bookend shots of Homs in 2012, the film jumps from Sri Lanka in 2001 to Iraq in 2004 to Afghanistan in 2009, and to Libya in 2011, where she interviews Gaddafi. The chronology is an insight into the time Colvin spent at home suffering from post-traumatic stress disorder. In the film her paradox is unambiguous: ‘I hate being in a warzone, but I also feel compelled to see it for myself.’

Just watched #APrivateWar and cannot see for tears. If you watch any film this year, go and see it! Marie Colvin. What an inspiration to women everywhere. 🙏🏻 pic.twitter.com/PKusPkCZ0D

Marie Colvin was an outstanding, gutsy war correspondent who cared for stories of the ordinary people amongst the chaos. While she would have preferred the focus to be on those, A Private War is all about her impact in reporting the warfare and Rosamund Pike does her justice.

A Private War is on general release 16 November.

Did you realise the dangers of corresponding on the horrifying conflicts in countries such as Syria?

In conversation with Miles Kane

Is Jojo Rabbit’s Comedic Take of the Holocaust a Necessary One?

Jojo Rabbit is a rip-roaring comedy we shouldn’t love, but do

Doctor Who Spyfall Part 2 does not live up to Part 1, but acts as a delicious setup for the series

A cat-astrophe of epic proportions: Lloyd-Webber’s musical never should have left the stage