The Women’s Officer position was the only role to have been proposed by students and passed through Student Council, with one poll in April 2017 indicating that the idea of a Men’s Officer was not supported by the majority of students voting. 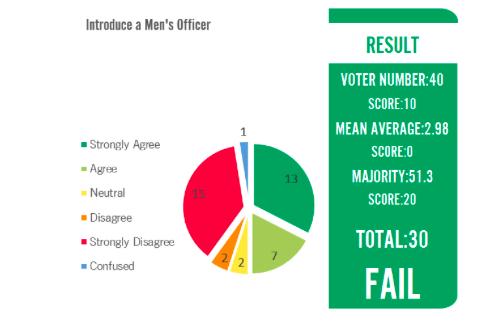 Stanford, Bristol’s Union Affairs Officer and Sally Patterson, Liberation, Equality and Access Officer, both strongly disagree with the role, and ‘would oppose something equivalent at Bristol.’ Stanford did, however, suggest that ‘that’s a conversation for our students to have if they feel it is necessary.’

Bristol SU has networks for under-represented student demographics, including women, members of the LGBT+ and trans communities, BME students and those from low income backgrounds. According to Stanford, comparisons should not be made between men’s struggles and the problems faced by these groups: ‘I don’t believe men are a liberation group. And I do not believe that men face discrimination for being men.'

‘Men are seriously well represented, if not over-represented, in leadership roles from the top to the bottom of our institution. Liberation is about historic and institutionalised forms of oppression such as that faced by women and LGBT+ communities. Men are not historically oppressed, and thus not a liberation group.’
Stanford, Students' Union Affairs Officer

the gendered ways in which mental distress plays out are not addressed by having a men's officer. not in the slightest. actually, by buying into a dangerous narrative in which men's mental health is weaponised to legitimise reactionary views about gender, it's actually worsened

James Knight, the candidate for the position, has stepped down due to what he has described as ‘the negative reaction to the Men’s officer position and external harassment that I have received.’

The debate surrounding the role has received national attention, with many calling out ‘bully-boy tactics’ of those who opposed it. Various groups within UWE have campaigned against the role, encouraging students to vote for ‘Re-open Nominations’ as a boycott.

James Knight stated that he was ‘very clear in distancing the role from that of liberation. I have campaigned tirelessly for mental health work and reform for years because I know how challenging this can be.’

The higher suicide rates of male students and the stigma surrounding mental health was cited as the main reasons for the introduction of the position. Asked if Bristol SU would consider a similar initiative, Stanford said ‘I do believe men face issues of their own. Men are at greater risk of suicide and physical assault, face obstacles within toxic masculinity and emotional literacy and regularly feedback concerns around expressing themselves and discussing their feelings.'

‘I support work to encourage discursive problem-solving around these issues and believe that men should have spaces to tackle them but I don’t think a Men’s Officer or organised liberation representation for men is an effective method.’
Stanford, Students' Union Affairs Officer

Given the only candidate for the role has withdrawn from the election, UWE SU shall not be introducing a Men’s Officer this term. While there are currently no plans for a similar role at Bristol SU, there are steps being taken towards the implementation of an International Students’ Officer to increase support for those moving from abroad to study at Bristol.

Do you think Bristol SU should introduce a Men’s Officer? Let us know: