Bristol’s Student Union reveals in a statement to Epigram, that it supports Sheffield Union's controversial drug guidelines and confirms it will be working towards a similar goal over the next year.

The University of Sheffield’s Student Union been the recent subject of dispute, for providing its students with step-by-step instructions on drug taking.

The information guides students in drug preparation and adminstration. The instructions include tips on cutting the right amount of powdered MDMA, as well as advising students to ‘never inject alone’. 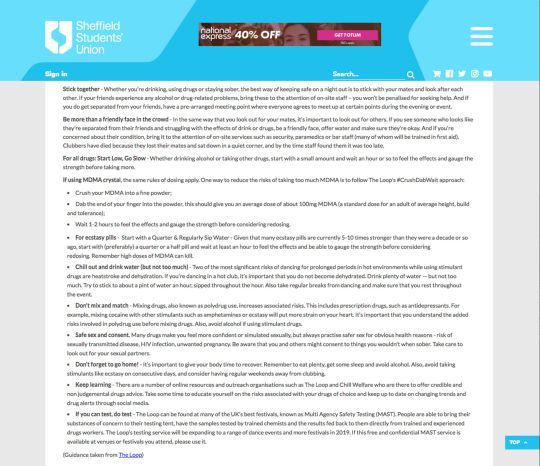 Whilst Sheffield Univeristy maintains a ‘zero tolerance policy towards drugs’, their Union Welfare Officer argues it is also ‘important we are realistic’. With two-in-five students now taking illicit drugs, (according to a recent survey by the National Union of Students), it is important to ensure that students ‘are as informed as possible and take steps to take all reasonable precautions.’

There has been backlash to the approach from a variety of medium.

Students within the University have criticised the contenious policy. A final year Spanish student Sab Jones argues that the guidance if you are injecting drugs, never inject alone, 'is basically saying it’s dangerous, but do it with a friend’. She went on to say, ‘I’m ashamed that this policy is real and, on their website’.

While, David Raynes, the National Drug Prevention Alliance spokesman says the Union's actions were ‘normalising drug taking’ by ‘creating a climate where there’s an expectation that students will use drugs’.

Following the negative recepetion, Sheffield's Student Union have removed their information page. They now provide a link to 'The Loop's' drug guidance, as an alternative.

The Student Living Officer, Vanesa Wilson, argues that, ‘It is crucial that universities are open and honest about what is happening on campus; we need to be realistic and we need to protect our students.’ Ultimately, the Union believes that ‘student safety should be the priority’.

In line with this belief Bristol’s Student Union intend to implement similar plans, ‘We currently have an active policy on effectively countering drug misuse, so we will be doing some work towards this over the next year’.

Bristol Green Week: how to get involved

'They pulled out all the stops' - RTB's 4th birthday @ Arnolfini