Zoë Crowther interviewed first-year students at the Welcome Fair about their experiences so far, revealing both strengths and weaknesses of the current system.

While this feedback was collected only a week into term, this is a particularly crucial time for many first-years: moving to a new city, making a new set of friends and beginning to adapt to independent life. Many of these students have therefore already encountered the wellbeing services and were able to give their thoughts on the new ResiLife scheme implemented across University halls.

Some students took note of the large amount of information provided, with Geography student Alice commenting ‘There is maybe a little bit too much information… Beyond a certain point you don’t take it in anymore.’

First year student Lauren was impressed with the University’s efforts, noting that ‘I for one feel overwhelmed with support since arriving a week ago. It made the process of moving away from home a lot easier to be welcomed in such a way.’

With the University acutely aware of the mounting pressure regarding the quality of the wellbeing services, there appears to have been a push for larger quantities of information to be conveyed to freshers about what is available to them.

Others were less clear on which services were available. When asked about whether she had been made aware of the support personnel in her accommodation, Film student Hannah responded ‘Ish… I’ve seen them around quite a lot. One of them was playing table tennis late at night.’ Fran, a Neuroscience student, commented that ‘I got told about it but the rest of my flatmates hadn’t heard of them.’

Physics and Philosophy student Elena gave her account of a largely negative experience: ‘I have already been in touch with student wellbeing. I phoned them and they sent me to ResiLife. I could only see an admin person there. They said it was busy, so the advisor would come back and talk to me, so I gave up. I found this first week so overwhelming. I would have felt less so if it was more organised and less confused.’ 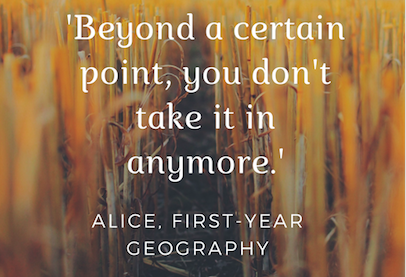 Elena also described the inadequacy of the freshers’ pack she was given and emphasised that she felt both physically and psychologically lost when the maps provided did not help her locate some key destinations on campus.

Some of those interviewed are living in private accommodation and therefore do not have access to the same services. Many of these students raised this as an issue: Childhood Studies student Alessia said that ‘The Residents scheme is just available to people in halls. One thing I found a bit weird is the counselling services – you only get six sessions!’

Maurice, a Physiology student living in a shared house, said that they had one Senior Resident to ten students, compared to one to sixty in halls of residence. He said: ‘I went ‘missing’ one night, so my friends woke up our Senior Resident and he called security and got everything sorted.’ 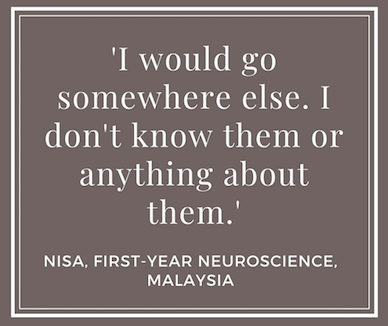 His housemates agreed that the Senior Residents scheme worked well for them, and that they had formed a close bond and felt comfortable with their accommodation and surroundings.

On the whole, students appeared to be more familiar with the wellbeing services within their academic departments, and generally praised the volume of information provided thus far.

Amy, studying Economics and Management, said ‘Within my department we had a talk about a website we can go on.’ Law student Sammy added ‘In my Law lectures, they’ve been talking about who to talk to’. 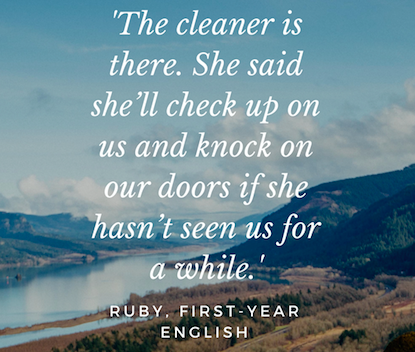 Talking particularly about personal tutors, English student Ruby noted ‘There is loads of supportive stuff about how your personal tutor can speak to you. They’ve been good with saying you can postpone deadlines if you need to.’

Ally, studying French and Italian agreed: ‘We’ve only just met our personal tutors but she seemed really friendly.’ Asked whether she would go to ResiLife or her tutor, she said ‘I am more likely to know my tutor better. Neuroscience student Fran seconded this, saying ‘The ones on my course seemed really approachable.’

Will, a Maths student, was also made aware of the support available in his department: ‘On Maths there are academics who are there for pastoral care. In the talk, that was the first thing they made clear – the support.’ 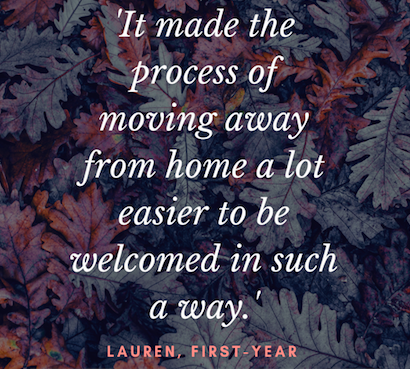 Many admitted they would first seek solace in a friend, and English student Ruby noted that ‘The cleaner is there. She said she’ll check up on us and knock on our doors if she hasn’t seen us for a while.’

The availability of services does not, of course, ensure that these resources become students’ first port-of-call. When asked if he would go to the accommodation support services, Maths student Jack responded ‘I would personally say no. It’s nice to know they’re there I guess.’

Nisa, a Neuroscience student from Malaysia said that she would not access Student Support Services if she was struggling: ‘I would go somewhere else. I don’t know them or anything about them.’

This perspective was shared by some of the other international students, flagging up a disconnect between what the University offers and the diverse needs of different student demographics. 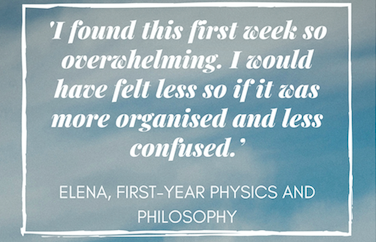 Every student appears to be aware of the focus on mental health this year, but there is an overhanging cloud of confusion surrounding where one can specifically go to seek personal help. While the tutor system has clearly been emphasised in departmental talks, the new ResiLife scheme appears far from being a service which first-years feel they can rely on for support.

For information on how to access the University wellbeing services, you can visit the website at: http://www.bristol.ac.uk/students/wellbeing/services/

If you need to speak to someone about your own mental health, or you are concerned about a friend, you can call Samaritans on 116 123 or email: jo@samaritans.org