One year ago, I interviewed Chastity Belt for Epigram. I pushed conversation for thirteen minutes. In some ways, it felt like a lifetime. So, when I was allocated fifteen minutes with Sophie Allison (aka Soccer Mommy) I felt quietly confident. I’d ask everything I’d need to, from an individual I’d have no personal connection with, and leave with pretty bog-standard material. What I’ve learned? Don’t assume anything about interviewees - especially not about Sophie Allison. 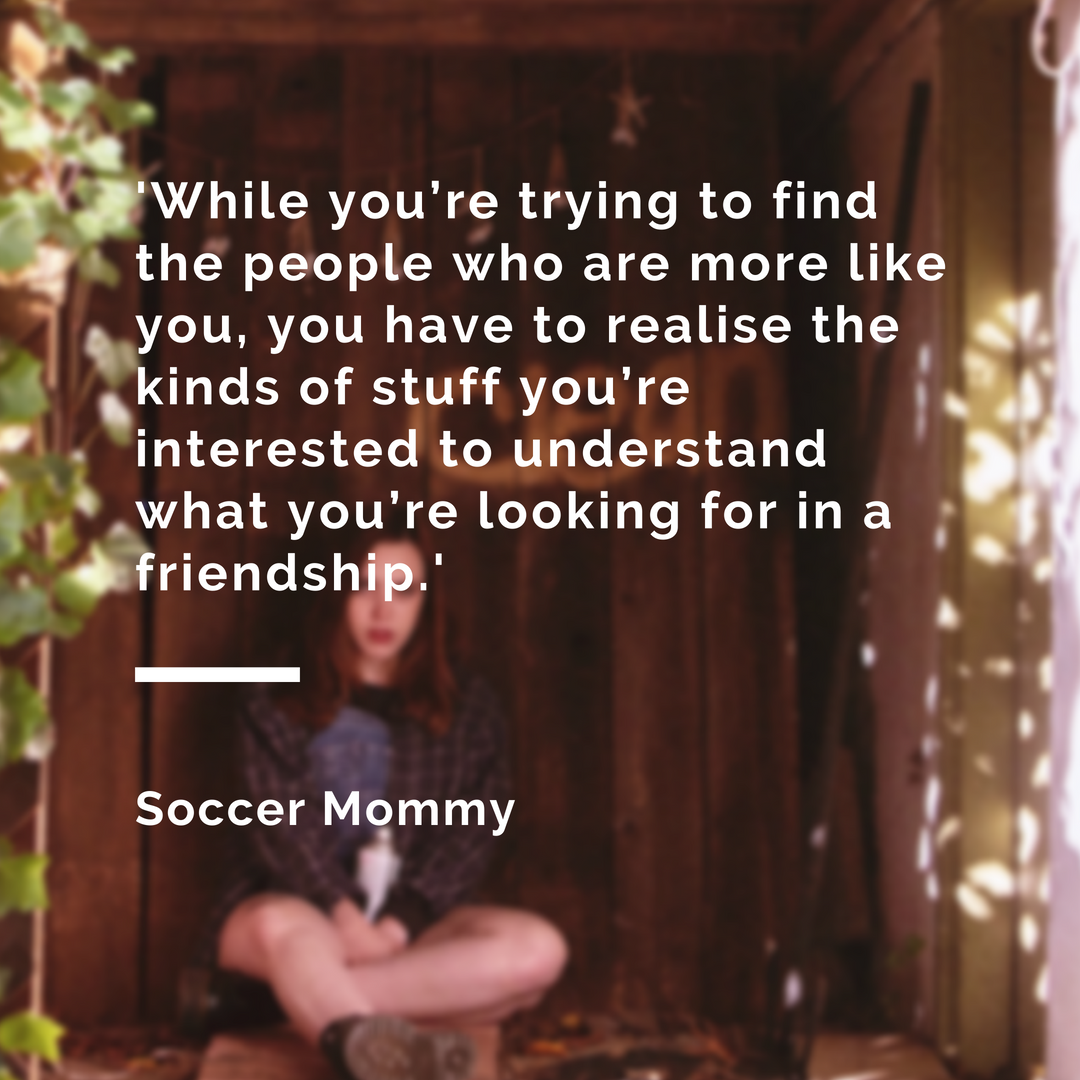 At the end of August, Sophie released a cover of Springsteen’s ‘I’m on Fire’, a tune which she’s played relentlessly on tour the past year. Trading the racing beat of Springsteen, Sophie adopts a personal take on pace, melody and within that - meaning. It forges something wildly different to the original, saturated in her increasingly trademark tone; reflective, soothing and troubled at times.

"I’ve loved that song since I was a kid. That song specifically, especially in high school, was one that I’d always listen to - especially when I was going through my first relationship which I knew was ending. It was always an emotional song for me. It was a song about longing."

Despite her first DIY release – For Young Hearts - hitting Bandcamp in 2016, Sophie has since released two more records: Collection and Clean. If you haven’t heard already, Clean is one of 2018’s most revered lo-fi, indie rock records. Arguably her breakout record; this vulnerable and gritty composition is received widely as it was originally intended: a coming-of-age record deriving its lyrical emotion from Sophie’s personal experience; past relationships, longing, and frustrations.

Exploring moments up to and including her time at New York University, the record gains its inspiration from life familiar to most 21-year-olds; study, change and confusion. But now? Sophie's life doesn't seem so familiar; she's touring the globe and had her previous life completely "uprooted:"

"My every day is totally different now. But I think the big things in my life aren’t different, and the new lifestyle brings inspiration and feeling, like missing home and friends in a way that I’ve never felt before. I don’t think the songwriting will change too much, but they’ll be new inspiration to it." 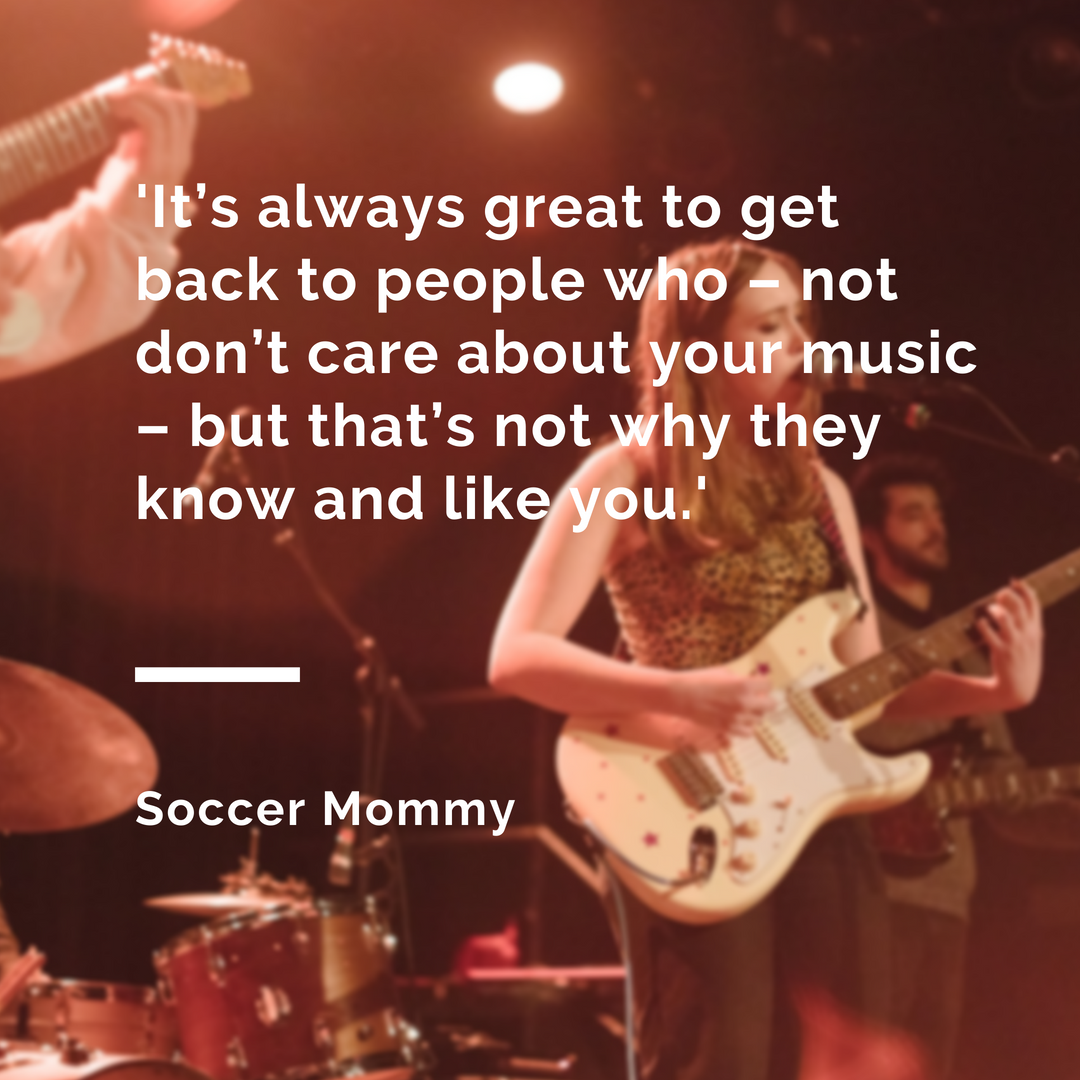 Take ‘Your Dog’: essentially a breakup record, this biting tribute remembers a paralysing relationship meeting its inevitable end. It’s symptomatic of the heartache informing the overarching, clouded sensibility of Clean; pushing her success to these scary new heights. Expanding on different inspirations, Sophie talks with a throbbing sincerity about the difficulty life on the road posits:

"Travelling is really hard. Even a year ago, it was even harder: I wasn’t making any money, sleeping on floors, touring all the time, eating shit food. It can be bad - you can’t see a psychiatrist if you need one. Healthcare can be difficult. You can’t have privacy - you can’t have a lot of things you might be used to."

Our conversation moves to coping mechanisms. Besides the support she receives from fellow musicians – including alt heavyweights like Snail Mail and Phoebe Bridgers - Sophie describes time spent with hometown and college friends. Now, it’s no secret her new life hasn’t forgotten these people; Twitter is filled with tributes to them. But now I can understand why. Though admitting their lives reflect a complete contrast to her own, these friendships relieve the Soccer Mommy persona - helping Sophie to live out normality again. It’s a therapy, almost: 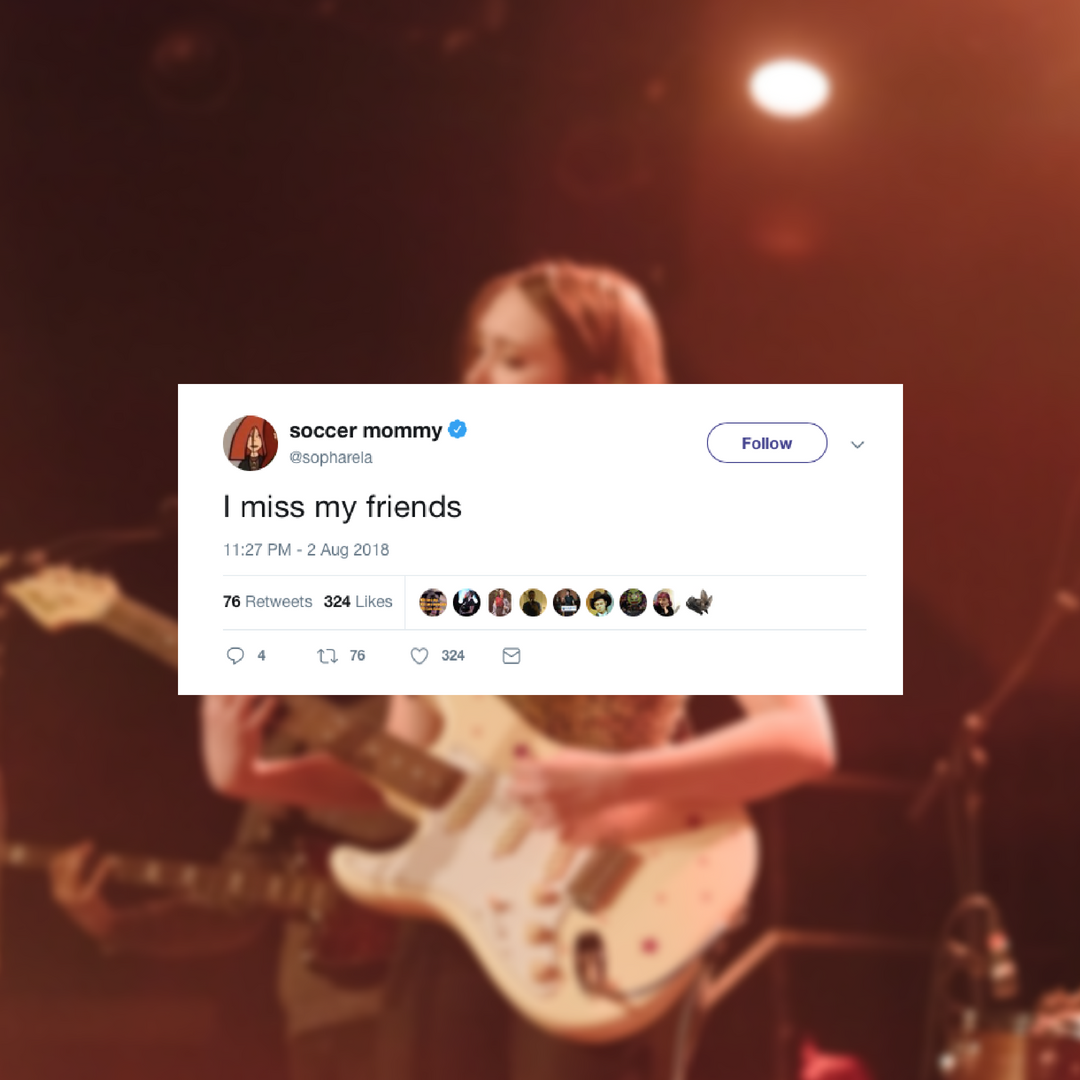 On Twitter, Sophie talks candidly about her life. Just days before we meet, she tweeted about her struggle with Body Dysmorphia – a psychological condition whereby a person obsessively focuses on envisioned bodily flaws. I ask whether she feels comfortable expanding on the subject. Sophie kindly agrees:

"It’s hard. I think a lot of people struggle with it. It’s not an issue of low self-esteem necessarily. There are certain parts of you which you see as wrong, and you can’t unsee it. It’s like a morphed image, really. 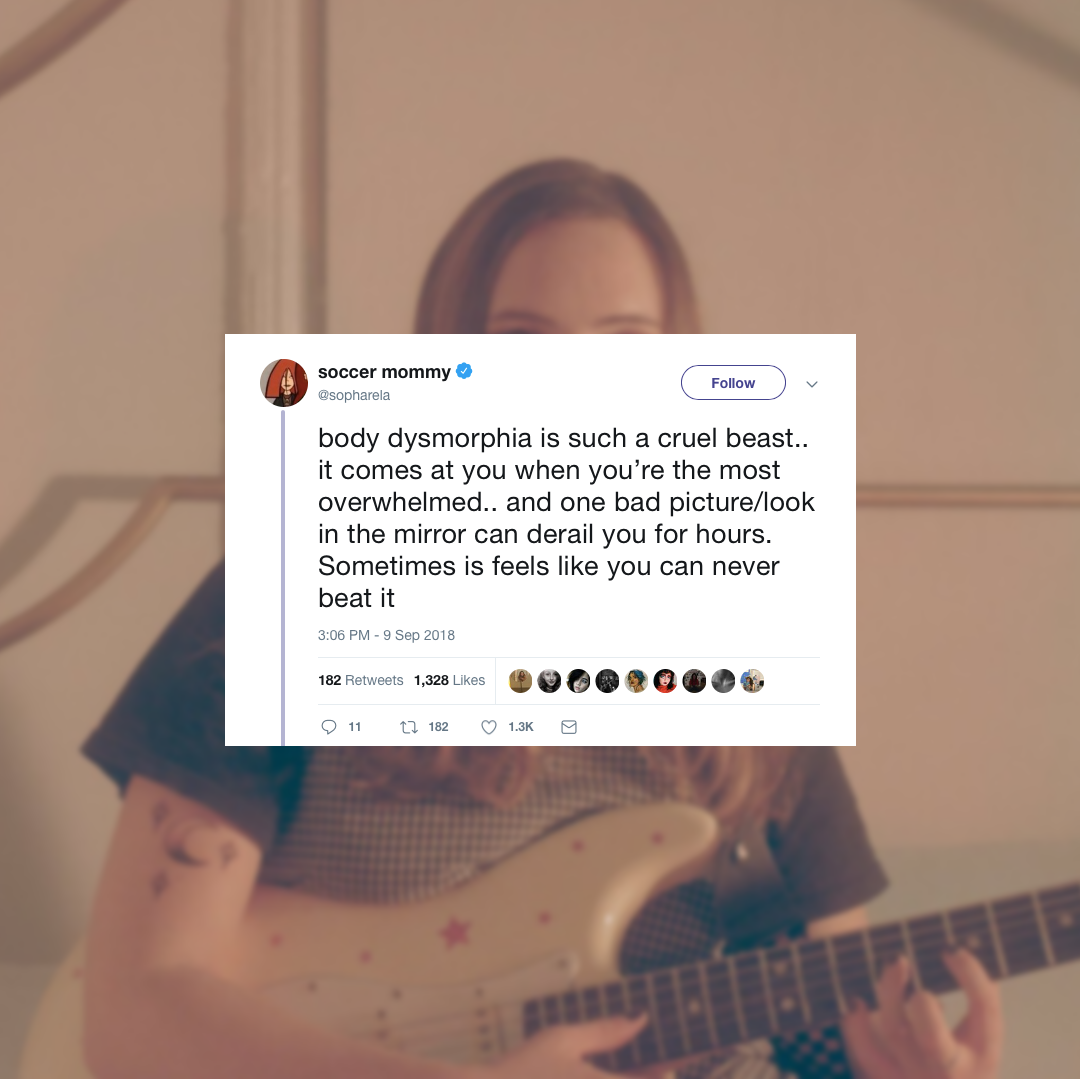 I ask how she copes with these feelings while touring, but Sophie doesn’t really have an answer. Not in a confrontational way - she’s just genuinely unsure and seems exhausted by it. She sighs:

"I don’t know, you know. Sometimes you just trudge through it. It’s a subconscious, obsessive thing that you can’t really help. It’s a thought in your head which won’t go away. So yeah, I’m still figuring out how to deal with it, really."

I thank Sophie for talking so openly about her experiences. We move to discuss the ups and downs she felt while studying - before taking Soccer Mommy full-time. Previously, she's spoken of issues affecting lots of students when moving to university. In light of this, I ask her to give some Freshers' advice:

"You meet new people pretty quickly usually, but often, you meet people who you get along with but don’t really connect with. It takes a while to find your core group of people – even sometimes like a year. But it’s a growing experience. You spend a lot of time alone. While you’re trying to find the people who are more like you, you have to realise the kinds of stuff you’re interested to realise what you’re looking for in a friendship." 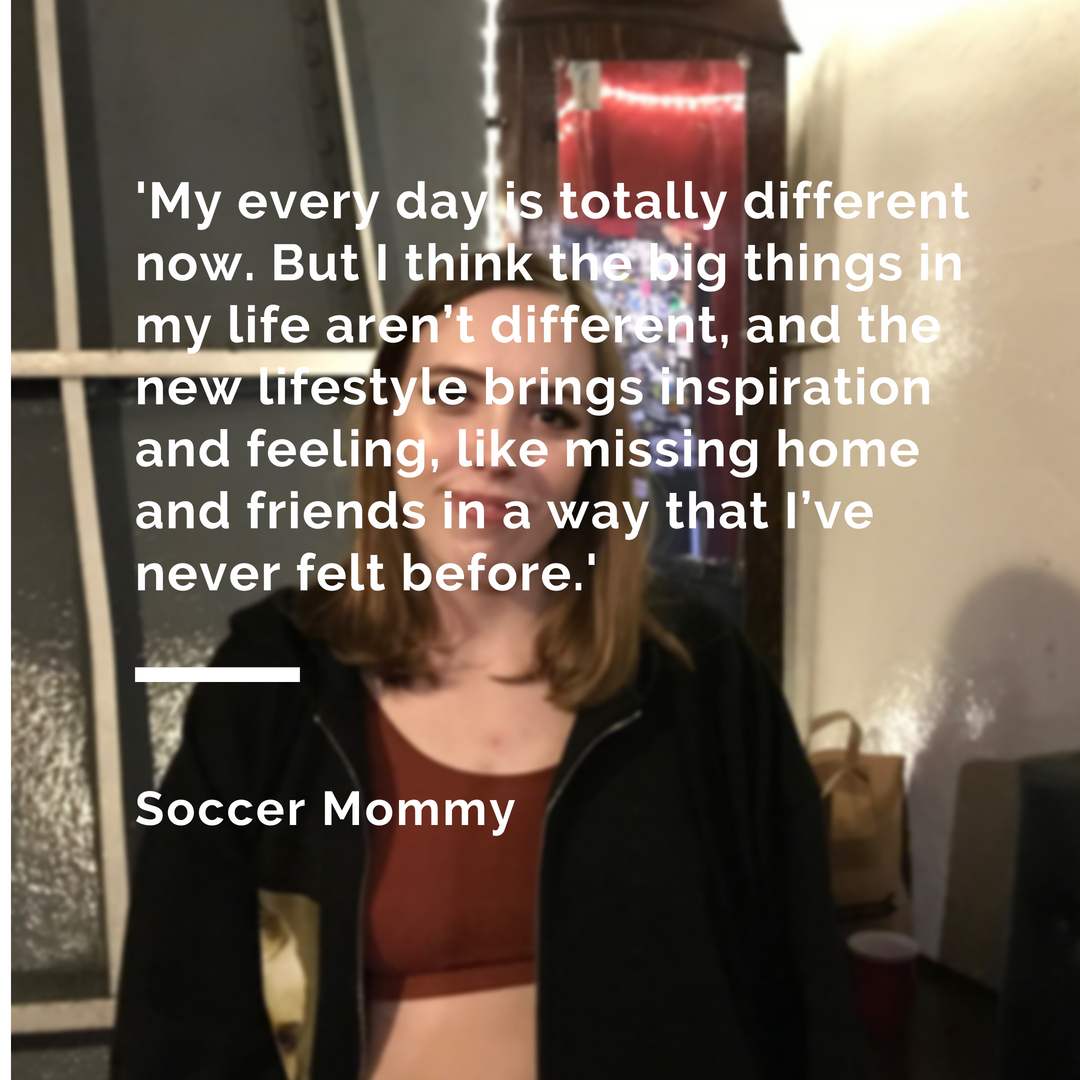 And long-distance relationships? Sophie describes it as a difficult balancing act but resolves; "if it’s gonna work it’s gonna work. In the end, if you want to make it work you will. If you don’t, then you’ll be fine. You just need a couple months."

We fast approach the end of my fifteen-minute slot. I’m amazed at how quickly the interview has gone, and slightly annoyed at myself. I didn’t get a chance to ask whether she had new material in the works (which, it turns out – she did) or her plans more generally. Despite this, Sophie’s honesty taught me something a little deeper than the usual insights retrievable from a fifteen-minute interview with a musician – never mind a complete stranger.

Sophie got a record deal halfway through her second year - a reality pretty inconceivable for even the most creative of students. She broke into the industry ahead of many and bagged herself incredible recognition alongside.

Despite these rare and distant circumstances, she’s experienced phenomena familiar to most of us. She found the move to university difficult, felt home comforts torn away and experienced a turbulent long-distance relationship. She’s also struggled with mental health and become one of many young people widening the conversation around it. But most importantly, she’s utilised her sound as a creative medium to channel – and combat – all of it. Surely, that’s something with which we can all forge a personal connection.

'Thebes' - a spanner in the theoretical works