BHM 18: A Celebration of Black Artists

By Epigram Arts Editors and Contributors

To mark the start of Black History Month 2018, students from across the University celebrate some of their favourite Black art and artists.

In 1963, engulfed by the white-hot lucidity of passion, James Baldwin penned a letter to his nephew. My Dungeon Shook is a brief, visceral and vertiginous piece of writing, detailing the place of the black man in an America overcome by racial injustice and discord. While framed as a piece of advice to his brother’s son, the work is imbued with a deep sense of self-searching, a desire to find the answers he is himself supplying. Despite his anger, his ultimate message is one of forgiveness, of acceptance, of empathy. He stresses that, despite white America’s dehumanisation of its black population, it falls on the shoulders of African Americans – like Baldwin, like his nephew – to accept those that serve as their oppressors. The white American, argues Baldwin, has been directly confronted with their contribution to black oppression; their world has been turned upside down by their sudden realisation that they are the sole proprietors of racial injustice. It is the role of the black American to force the white American to acknowledge their wrongdoing, and to shepherd them away from racist thought, and towards an acceptance of African Americans. As Baldwin himself writes, ‘The black man has functioned in the white man’s world as a fixed star, as an immovable pillar: as he moves out of his place, heaven and earth are shaken to their foundations’.

Today we honor the life and legacy of James Baldwin on what would have been his 94th birthday. His powerful words about race and the importance of intersectionality remain as poignant as ever. ✊🏾 . . . #LGBT #LGBTQ #Equality #HumanRightsCampaign #HBD #QOTD #JamesBaldwin

A post shared by Human Rights Campaign (@humanrightscampaign) on Aug 2, 2018 at 7:46am PDT

While he was a student at Goldsmiths in 1991, a teacher asked Shonibare why he wasn’t making ‘African’ art. Shonibare became fascinated by the idea that, as someone with a Nigerian background, he was expected to engage with African concepts of art. He began turning to British icons, considering the sombre backgrounds to the iconic pieces, commenting, ‘who had to be enslaved in order for you to be able to afford a portrait painter?’ Since then, Shonibare has become one of the most exciting contemporary British artists, receiving a string of nominations and awards. Utilising Dutch wax fabric, a material that has become a symbol of African independence and identity, Shonibare dismantles some of the most iconic motifs and characters of British colonial history. In 1998 Shonibare challenged Thomas Gainsborough by sculpting the Mr and Mrs Andrews from his well-known 1750 painting. Shonibare cut off the heads of the aristrocratic couple and dressed them in Dutch wax fabric. That same year, he positioned himself in a series of Hogarthian photographs named Diary of a Victorian Dandy, which challenge the idea of a black man in the role of a rich Victorian. In Trafalgar Square in 2010, Shonibare displayed Nelson’s Ship in a Bottle, replacing the flags of the Victory with richly decorated Dutch wax fabrics, considering how one of the most famous maritime victories enabled the slave trade. Shonibare continues to make viewers question the accepted heroes of British history and how there are multiple sides to every story.

When the so-called Greatest Living American Novelist - Philip Roth - passed away earlier this year, the literary world debated about who would succeed such an acclaimed title. To me there was no competition: Toni Morrison. Born in 1931 in Ohio, Morrison was the first ever African American woman to win the Nobel Prize for Literature. She has devoted herself to express the black experience in an acutely harrowing yet poetic manner, with her most critically acclaimed work being the 1987 novel Beloved This story of Sethe, who had been enslaved but managed to flee with her children, is an exquisite depiction of motherhood, guilt, and the psychological legacy of slavery. However, despite the novel’s popularity, it did not win the National Book Award for that year, resulting in a letter of protest being signed by 48 African-American writers, including Maya Angelou and Angela Davis. Following this, Morrison has continued to publish numerous works of both fiction and non-fiction, and has won many more prizes, including the Presidential Medal of Freedom. But in the end it all comes back to her words, which combine the personal and political in a way that feels absolutely necessary now, as ever.

The Revolution Will Not Be Televised; its title could be a political manifesto all by itself. Gil Scott-Heron’s 1970 work is a masterpiece of the protest song genre, making an incisive statement about the situation of black Americans during the supposedly liberated 60s with a perfect tongue-in-cheek attitude. Scott-Heron’s knowing skewering of white culture acts as a front for the underlying revolutionary message in his lyrics. Sparse instrumentation highlights the percussive intensity of the lyrics and the underlying message to black Americans to search for 'a brighter day'. Scott-Heron makes it clear that this happy future will not be had easily, of course; the title itself is a callback to a popular Black Panthers slogan. While he takes aim at white culture and TV, his obvious disdain for the greater American capitalist system lends an altogether more radical aspect, almost reminiscent of Martin Luther King’s abortive Poor People’s Campaign, which white America found so unpalatable. Scott-Heron’s ambition to put black Americans 'in the driver’s seat' of a cultural revolution, when listening to this visionary piece of writing, seems completely feasible.

Yewande Adeniran can’t be described simply: Ifeoluwa is just her DJ name. That’s not to say she isn’t killing it under this title, especially here in Bristol, but that’s just the start of her everyday repertoire. Beyond a monthly NTS slot, 404, consistent lineup appearances, Dialogue residency, and recent Discwoman mix; she’s an activist, mentor and, Philosophy academic specialising in post-colonialism, gender and queer studies.

Taking to social media to discuss the issues underpinning electronic music, and unwarranted criticism received in her own life, Yewande continually reminds people of an ongoing discussion making stagnant process, namely an electronic music scene severely lacking diversity. Besides this, her free DJ workshop, Intervention, continues to diversify by giving marginalised groups in music an essential platform, equipment and training. With her experimental sounds creating social media frenzies and her activism ringing in the ears of many, Yewande’s sonic art and social impact are both worth screaming about. 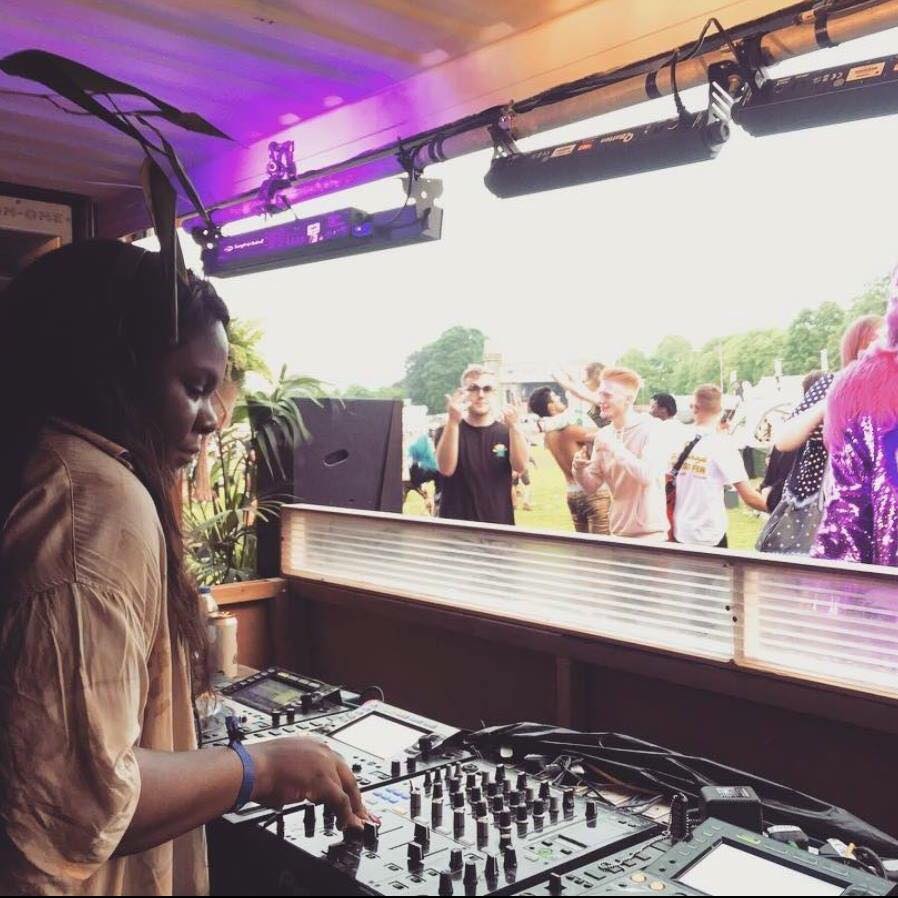 Quoted in an exhibition at the University of Bradford Gallery II were Tam Joseph’s words: 'I wasn’t trying to develop distinctively Black art. I was trying to develop myself as a person, through my art'. Despite his pioneering role in the first generation of black British artists, Dominican-born Joseph refuses to be reduced to an artist who solely focuses on issues of race.

But his work can certainly be categorised as socio-political commentary. Spirit of the Carnival reflects the uneasy relationship between black communities and the police in the early 1980s, particularly at the Notting Hill Carnival. It depicts a performer, dressed in a traditional Dominican carnival costume, encircled by riot police, defiantly and joyfully continuing to dance. UK School Report is a cartoon-esque triptych, showing three black students. The neatest student is captioned ‘Good at sports’, the second, with longer hair, ‘Likes music’, and the third, presumably unfairly categorised as a delinquent, is labelled ‘Needs surveillance’.

Tam Joseph with his “Nature Morte” installation, comprised of dried up pomegranates. #tamjoseph

Do you have any icons from the Black History Movement that you would like to give more attention to? Let Epigram Arts know:

The ugly truth about eating disorders