My summer volunteering in the Himalayas

Lauren Jeffery describes her summer trekking through the Himalayas and helping provide schools with electricity with The Global Himalayan Expedition.

In the summer after first year, three close friends and I decided we wanted to explore India. On arrival into the country, I felt like my senses were being violated - I truly was in the hustle and bustle of Delhi. We soon escaped this chaos by getting a flight up to Leh in the state of Ladahk in the Himalayas. Here, you are incredibly high up, and even though we had less oxygen it seemed like a breath of fresh air.

Village Ralakung's Electrification is an incredible feat and a testimony to the powerful potential of sustainable tourism. This September a group of 20 Change-makers from 9 different countries joined forces with team GHE to bring light to the Ancient Buddhist village of Ralakung. pic.twitter.com/1xiieJsvyw

The Global Himalayan Expedition (GHE) was the reason we travelled so far north. Paras Loomba, the founder of GHE, had personally created the opportunity for us to trek through the Marca Valley and help electrify a school. GHE have been running for seven years and throughout their time have already helped 63 villages and have electrified 25 remote villages that were literally off the grid as they were not mentioned on any maps. This is a wonderful organisation that goes into the core of some of the hardest parts of the Himalayas in order to give small villages the opportunity to have electricity.

GHE have been running for 7 years and throughout their time have already helped 63 villages and have electrified 25 remote villages...

In order for this to be feasible Paras Loomba encouraged Tsering Dorjay and Stanzin Gurmet to set up a trekking company called Sun Trails. While in Ladakh we got the amazing opportunity to spend time with both Dorjay and Stanzin as they led us through the Marca Valley for three days. The trek itself was spectacular, the vast beauty of the mountains never got old as the mountains continually shape shifted, their colours flowing from violet to ivy as we walked deeper and deeper into the valley.

On the second day we reached the peak which is around 4900ft high. Here, we took part in a traditional Buddhist flag ceremony in order to commemorate the moment. In the evenings we were treated to Ladakhi delicacies such as momos - a kind of savoury dumpling - and then would go up onto the roof and star gaze. We were so high up and remote that the sky literally shimmered; we not only saw Orion's Belt but five shooting stars. Each of the homestays we stayed in had their own unique feel about them but all were quaint, traditional and homely, and all had been helped by the electrification process. Once GHE and Sun Trails have electrified a village they support the villagers in promoting their tourism by setting them up on Airbnb in order to help the villages to become accessible to the outside world. 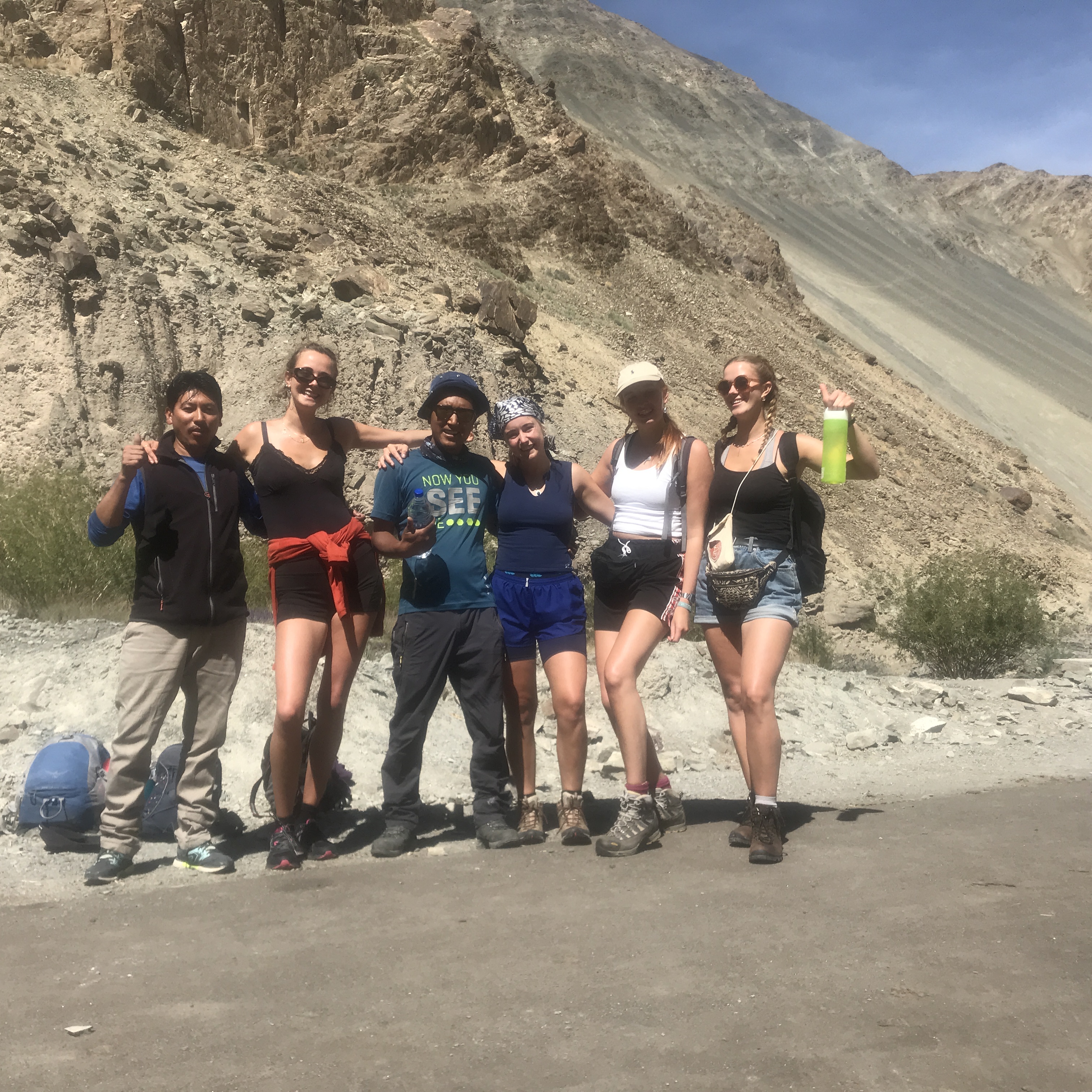 While staying in Yurutse homestay, Stanzin told us how he came to join GHE and the way in which it made him feel a part of something that was truly making a difference. He spoke of an 80-year-old women coming over to him crying with joy as she never imagined that she would see the day that her village would get electric light. It was an absolute joy to get to spend time with both Dorjay and Stanzin. Both so kind hearted and full of energy, they constantly went the extra mile for us; in Shingo homestay Dorjay even managed to muster up supplies for his famous apple pie despite us being in the middle of no-where!

Together GHE and Sun Trails make it possible for people in Ladakh to get electric light.

In the 10 days that we got to spend with Dorjay and Stanzin it was also abundantly clear that the communities were so grateful for all they’d done. Together GHE and Sun Trails make it possible for people in Ladakh to get electric light by raising funds and awareness and encouraging travellers to come and support them in the field. Once there, they take solar panels and generators up into remote villages, and install them into the homes and schools that need them. For example, while we were out there we got the opportunity to help electrify a school and install new computers; the teachers spoke of the aspirations they had for their students to go to college and how fundamental it is for them to have access to the internet.

In the four and a half weeks I spent in India this summer, my time in Ladahk was by far my favourite period. Both GHE and Sun Trails are immensely worthwhile organisations that are focused around impact-tourism. They are making a huge difference to people’s lives and I would strongly recommend being a part of it.

Are you interested in sharing your travelling tales? Get in touch!

Social media has a powerful role to play in body positivity