The wacky animated comedy in BoJack Horseman has always been undercut by uncompromising mental health portrayals, but are the more serious ideas lost without time to reflect between episodes?

BoJack Horseman Season 5 kicked off not with a bang but a stumble. While the season made curious decisions with the characters we’ve come to love to hate, it felt like more of a yawn into the void than the shout it used to be.

The show picked up on most of the old plot points from last season: the perpetually irritating joke that Hollyhock has eight gay dads; the slowly souring Mr Peanutbutter and Diane sandwich; Princess Carolyn’s search for an heir; Beatrice Horseman’s deteriorating condition and BoJack’s deteriorating ability to care anymore.

Despite some standout moments, the season seemed to fly by with far less of an impact than the previous ones. After last season’s particularly emotive ending, this season had a lot to stand up to, which the final episode at least did. The reason it seemed to go in a blink goes hand-in-hand with the service through which we watch BoJack Horseman.

The show is a Netflix original and exclusive to the streaming service, who choose to broadcast all the episodes of the season at once. For viewers with jobs, partners, things to do and self-respect, this is a blessing. One episode can be taken in after a long day at work, or curled up on the sofa with a significant other.

For everyone else, however, you have no other choice but to lie in your own filth for six hours and fix your tired eyes to the screen, watching every episode back-to-back. You’ll finish the season dazed and disorientated. Limply, you’ll brush away the Dorito crumbs lining your keyboard. Maybe after another vacuous week or two you’ll do it again.

Blitzing absent-mindedly through other shows may not be an issue. But if any TV series should be taken in small doses, it’s BoJack Horseman.

definitely need this time alone and dont wish anyone was with me pic.twitter.com/5SowhCVXOc

To appreciate, for instance, the show’s mind-boggling number of visual Easter Eggs, you need to keep an eye on every corner of the screen. You may miss the ‘Quack Demarco’ poster, the wolves with adopted sheep or the ‘gritty show ideas’ scrawled all over Flip’s office if you’re watching half-asleep at four in the morning.

Binge-watching puts you in a trance; eventually you’ll realise you’re watching the show for the sake of watching something. It becomes a habit of comfort. But Bojack Horseman is supposed to be everything other than comforting.

Mental breakdowns aside, I will always cherish the annual commiserating and comfort between @TheMilesJackson and I over Bojack Horseman.

Hearing the phrase ‘life is a series of closing doors’ and then immediately going on to the next episode - and skipping the intro - feels cheap. Waiting a week between episodes would grant BoJack Horseman the gravity it deserves.

The moments that manage to survive the six-hour, unrelenting bingefest are definitely noteworthy, however. 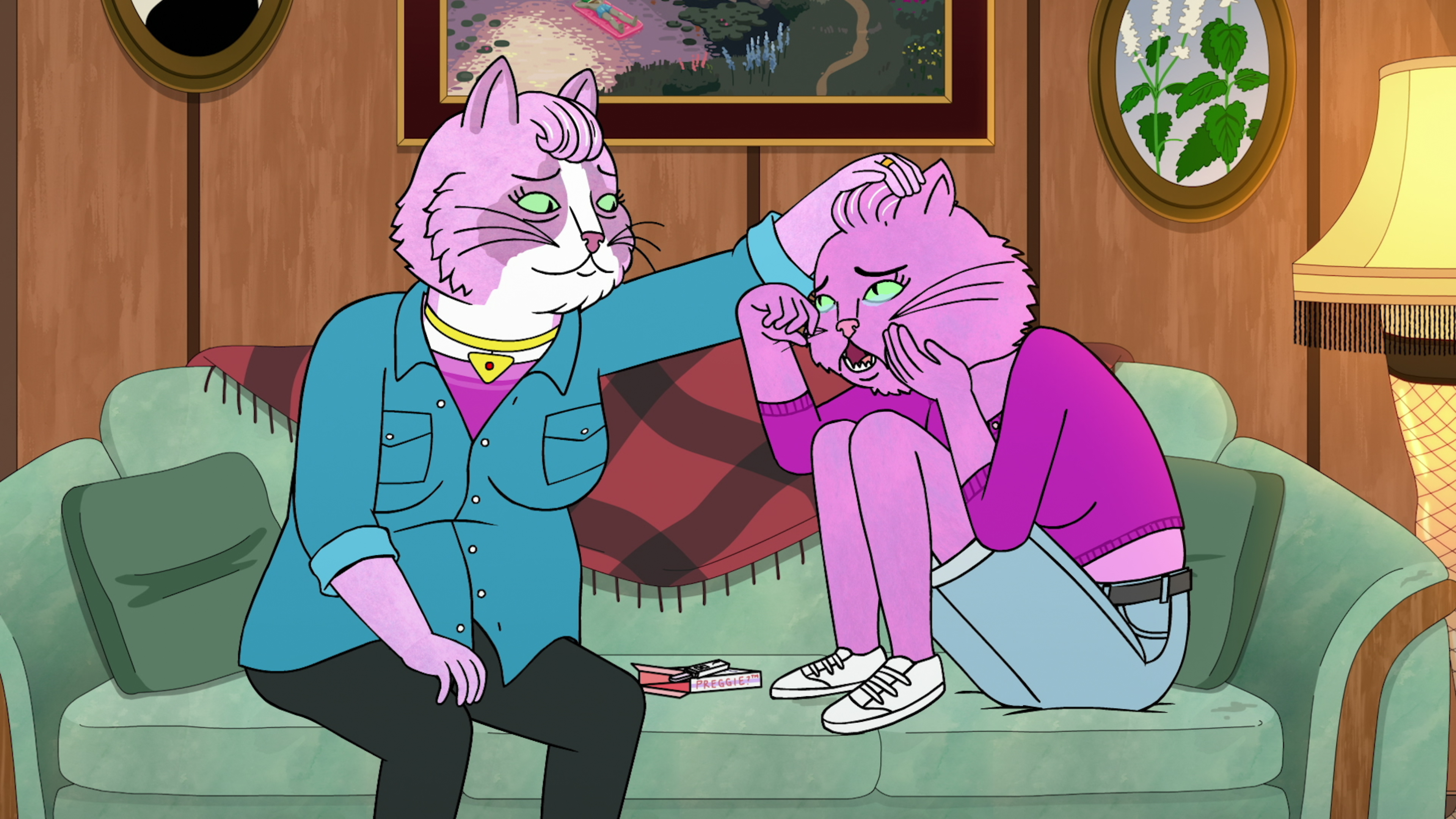 ‘The Amelia Earhart Story’ (Episode 5) is especially touching as we are made privy to Princess Carolyn’s unexpected origins in North Carolina, and the episode adds another layer to her desperation to start her own family. PC has always been a favourite character, but her continuing depth throughout the series is admirable and a credit to the writers. 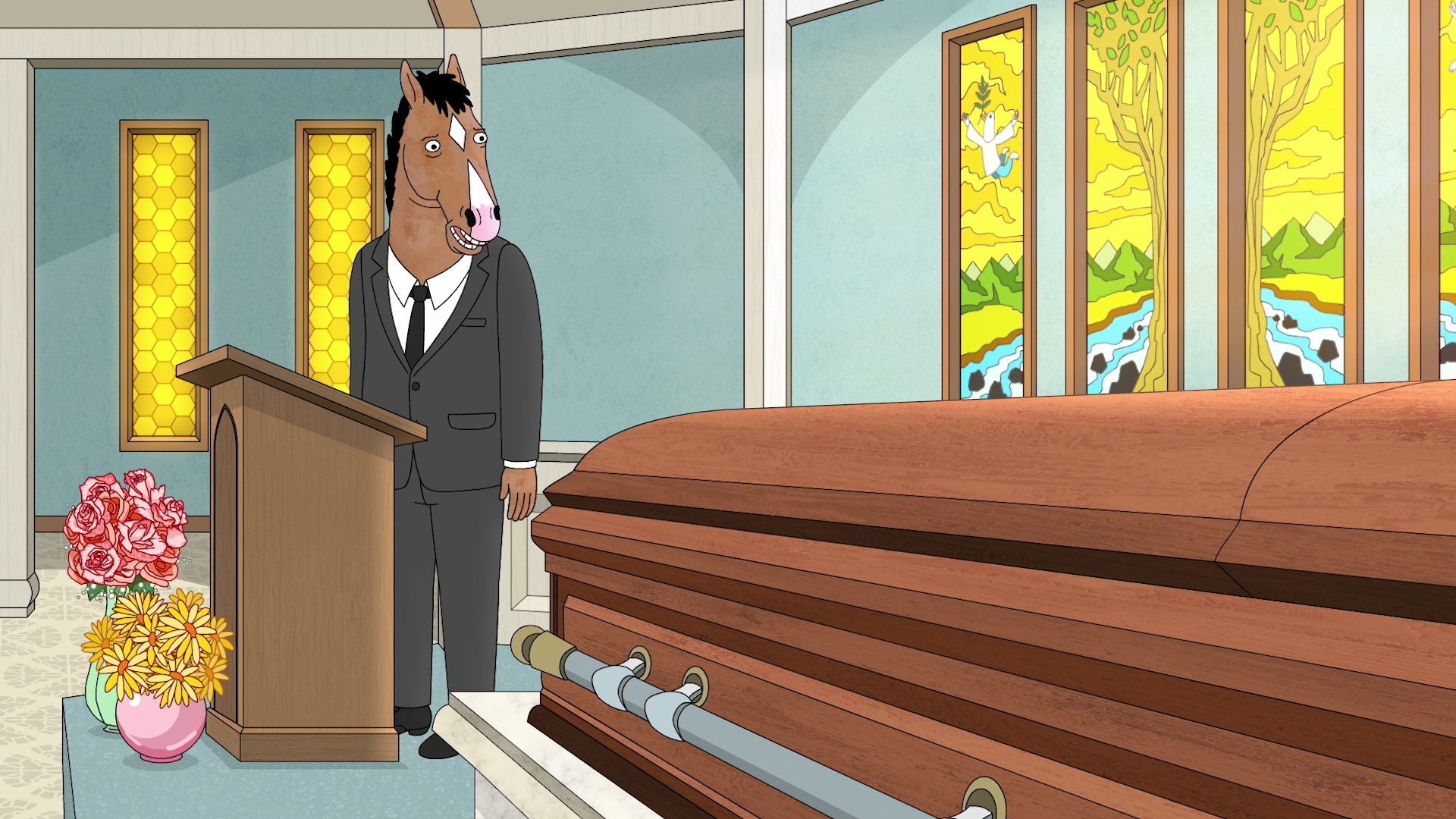 ‘Free Churro’ (Episode 6) consists entirely of BoJack’s eulogy at his mother Beatrice’s funeral. It is bittersweet and the humour is darker than midnight but still it is more than that. It is everything we have all thought of Beatrice, with an honesty and compassion that could only come from her son. We learn more about her, him, and his psyche, all in one breathtaking half hour. 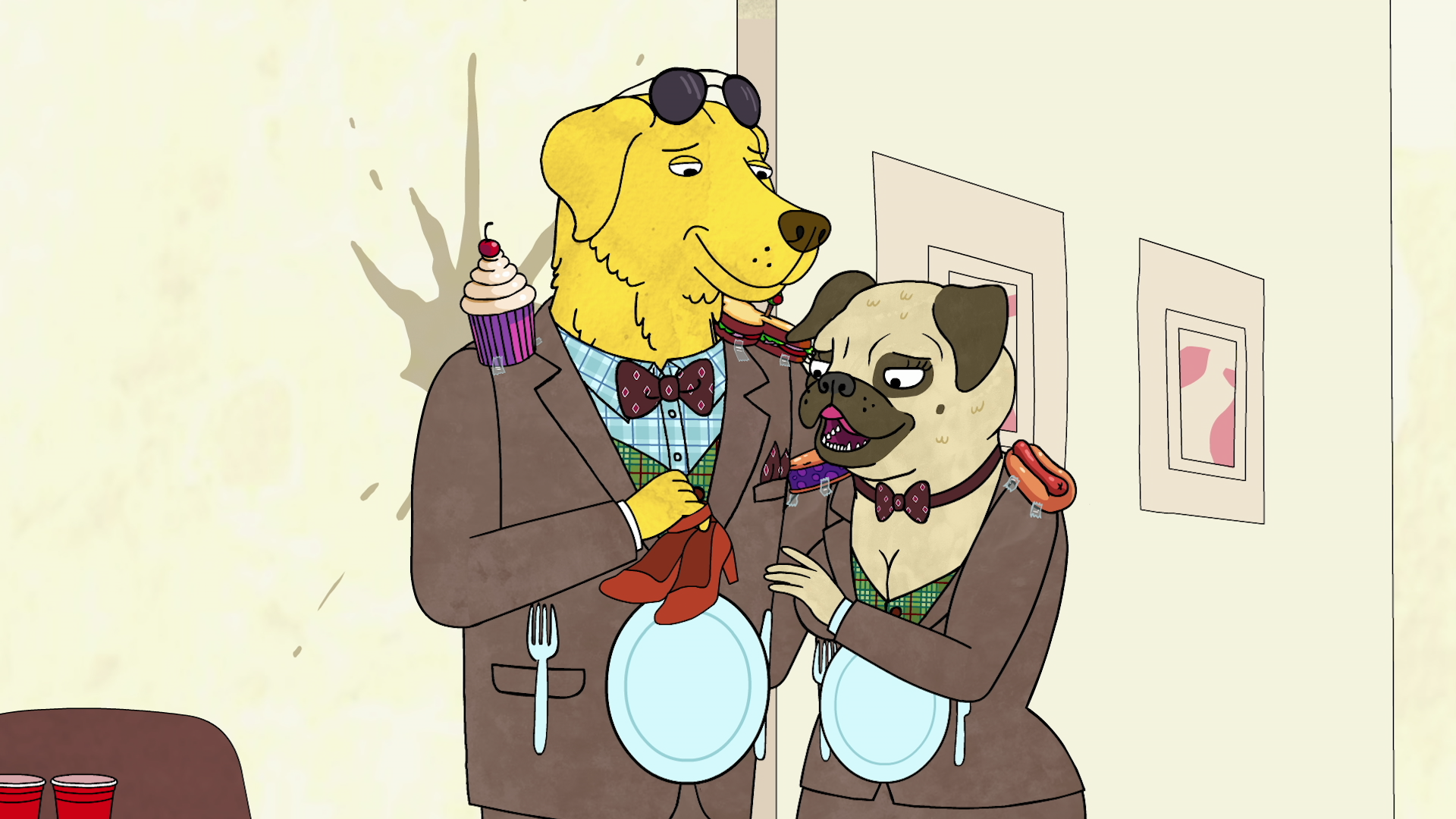 ‘Mr. Peanutbutter’s Boos’ (Episode 8) is not as clear a standout as the aforementioned episode, but one moment sticks more poignantly than any others. As Mr Peanutbutter worries about his differences with his new girlfriend, Pickles, Diane explains why all of his wives are so similar, and why they all grow tired of him. They’re all young at the start, and older at the end. Never before had Mr Peanutbutter’s penchant for fresh meat been so obvious, but afterwards it becomes impossible to shake. This loveable oaf whose naivety defies age really never grew up, and you soon connect the dots with how many men in real life are Peanutbutters. 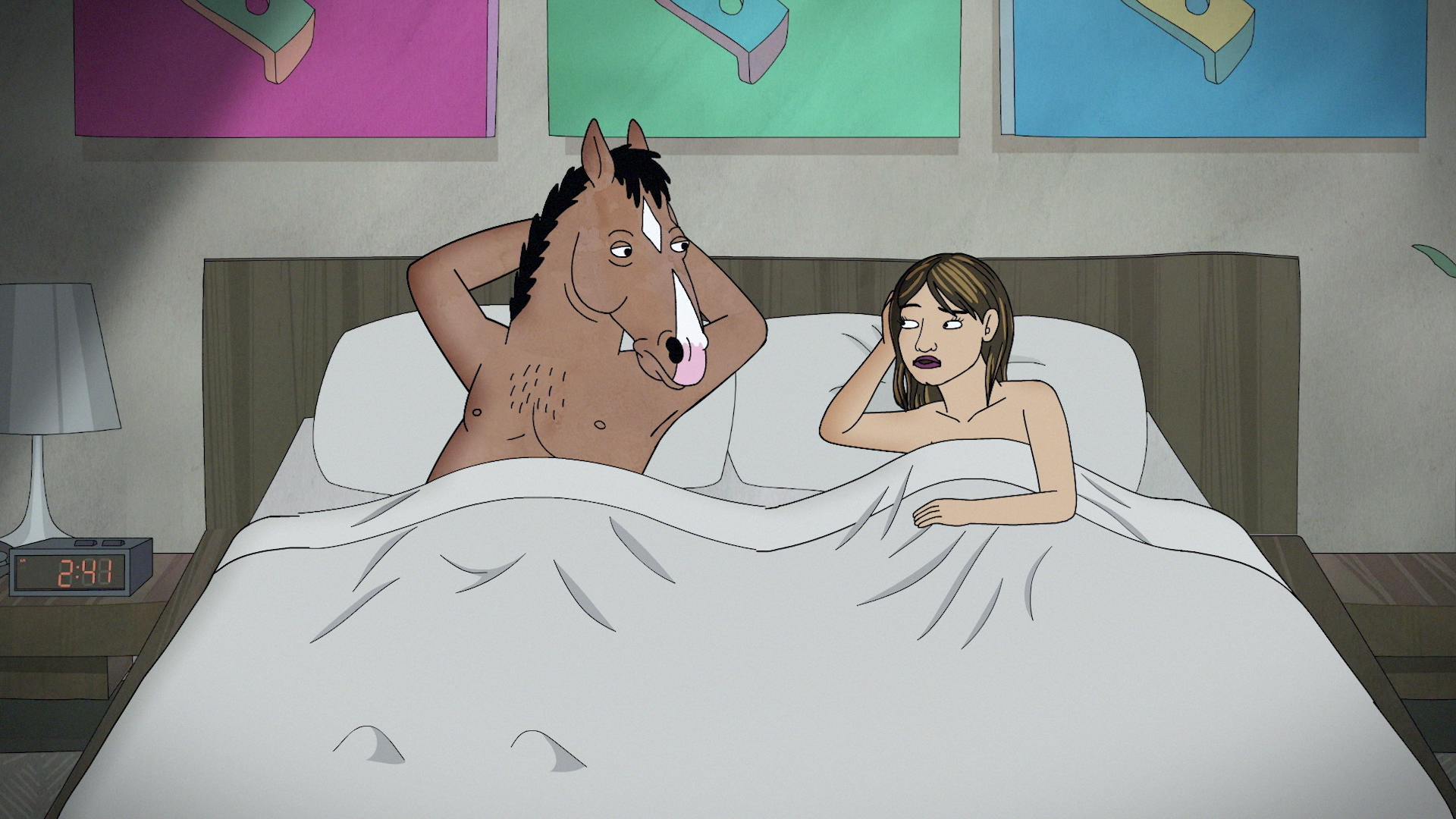 As with every BoJack Horseman season, the show pays its own painful tribute to the prevalent mental health issues. ‘The Showstopper’ (Episode 11) truly is showstopping. Its portrayal of BoJack’s addiction and mental state is a harrowing watch but entirely necessary. Our ability to be sheepishly amused by his intoxicated antics is thrown back in our faces, and rightly so.

When other shows try to depict mental illness, we often end up with reductive dilutions and offensive stereotypes. The infamous 13 Reasons Why (2016) can be taken as a case in point. BoJack Horseman, however, stands resolute in a brutally honest depiction of mental health.

The season rejects easy answers to false epiphanies. BoJack’s dream of being a ‘better person’ is dashed time and time again by his crippling character defects, partially inherited from an abusive upbringing. His pathological desire for validation from others stops him doing the right thing, as in Episode Four, when BoJack laps up credit for being a male feminist while acting in a show that normalises misogyny.

The entire series highlights the dangers of self-medicating mental illness. BoJack chugs copious unnamed pills and drowns himself in litres of straight spirits. When questioned, he says it ‘makes everything normal’. The final scene of ‘Showstopper’ - where we witness an intoxicated BoJack strangle his female co-star of Philbert - proves him tragically wrong.

The painfully genuine themes stand in dizzying contrast to some of the subplots, which run like the dream of a deranged and hyper-imaginative 12 year old. Sex robot, Henry Fondle, fluking its way to CEO of the broadcaster of Philbert using seems out of place in a show so genuinely determined to make viewers aware of the plight of mental illness.

BoJack Horseman’s greatest triumph is its honesty - brutal and ugly, hilarious and loving, the truth comes in as many shapes as there are species in BoJack’s world. Season 5 is another spectacular edition to the kaleidoscope world he staggers through.

Do you find binging Netflix shows improves or takes away from the viewing experience?