The annual film festival provides a host of screenings from a variety of nations during Freshers' Week (25-30 Sep).

This year, ‘Encounters Film Festival’ conveniently falls on Freshers’ Week, and takes place at Watershed and other venues on Bristol’s bustling Harbourside.

The event is a plethora of independent British and International cinema - mainly short films, animation, and, this year, virtual reality. There are also talks with successful filmmakers from previous programmes with Toby Macdonald, Dionne Edwards & Georgia Goggin, and Matthew Holness.

One event that will be hard to miss is ‘Perpetual Cinema’. It is an endless loop of 16 short animated tales shown on a big, public screen in Millenium Square throughout the festival. Each film is less than 10 minutes and by directors from countries including Ireland, Luxembourg, and Latvia. It is free to attend so a lack of funds is no excuse - check it out!

Beyond that, the schedule is jam-packed between 10am and 10pm from Wednesday to Friday at Watershed, a beloved independent cinema you will grow to adore during your time at Bristol. There are nine showcases of short films and six showcases of animations, each 90 minutes long, showing in the main screening room. Each showcase has a different theme, such as ‘Secrets & Lies’ or ‘Other Worlds’, so I recommend delving into the details of them online. 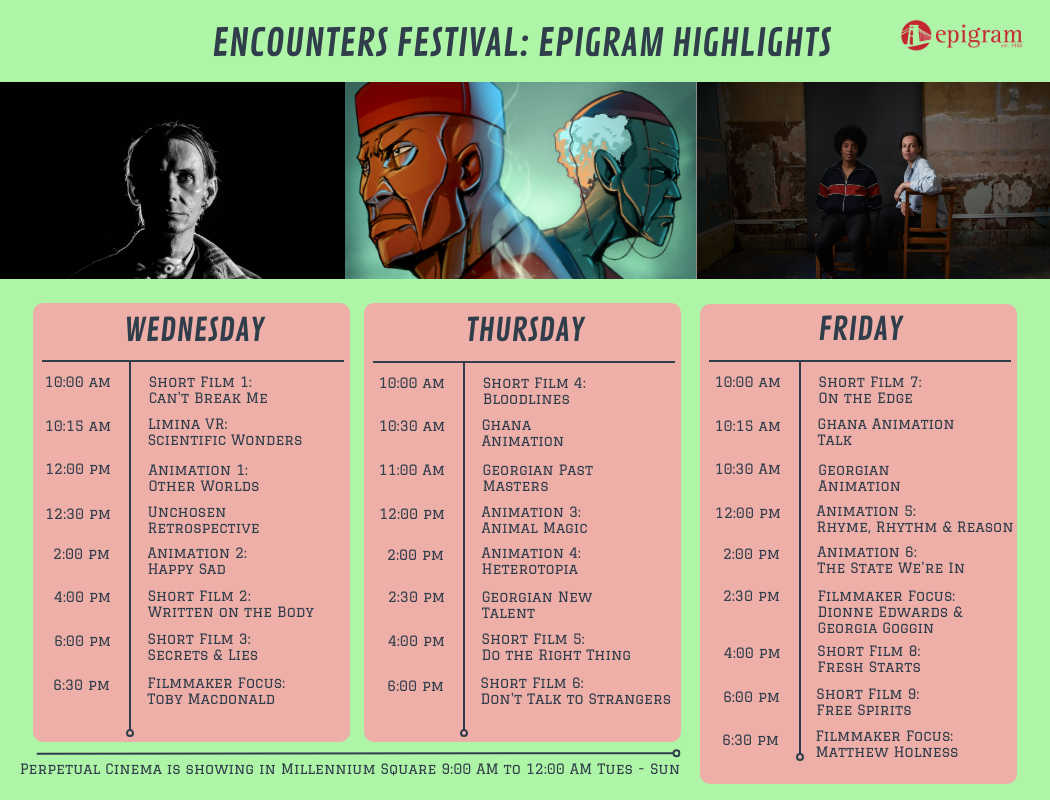 Other events that promise to be highlights of the week include ‘Unchosen Retrospective’, ‘Ghana Animation’ and a collection of Georgian showcases. The former is a collection of short films from the archive of Easton-based charity Unchosen. Though the charity has unfortunately closed down, it still runs film competitions and projects to highlight the ever-prevalent issue of modern slavery. Considering the lack of public knowledge on the subject, the showcase will provide an insight into the harrowing experiences of people both in and out of the UK.

On Thursday, the Ghana Animation showcase not only presents short animated films from its titular country, but Ethiopia, Zimbabwe, Madagascar and many more. It is followed by a talk on Friday morning on the challenges and opportunities of the African animation industry.

This year we've got a special focus on Georgia & 5 of our events feature films from the country, inc Georgian Past Masters, Georgian Film Schools and Alaverdoba. Discover the wonderful hidden world of Georgian short film at #Encounters2018 Image: Alaverdoba (Thurs @ 17:00) pic.twitter.com/iq5w7EMfg2

There are five events concerning Georgian cinema. Up first is ‘Georgian Past Masters’ - a showcase of three short films from the late 1960s, the golden era of the country’s film industry. ‘Georgian Past Masters’ also shows No, Pal! (1993), an arresting film from the ‘90s, which was a more sparse period of film for the country. The others events show more recent Georgian short films, animation, student work respectively, as well as feature film Alaverdoba (1962).

The virtual reality programme is led by Bristol-based company Limina Immersive, who have collaborated with the famed Bristolian company, Aardman. There are multiple showings of each Limina event from Wednesday to Sunday, including a two minute visualisation of the inner workings of the brain.

Each of the events listed above and the rest of the schedule, apart from 'Perpetual Cinema', is £6 per ticket or a festival pass is £35 per day or £85 for the week. Tickets, more information, and the full schedule of events can be found on the Encounters website.

Let us know if you'll be heading to any of the Encounters events!

Histories of Bristol: Our University