The flurry of rainbow-coloured flags, all-glittered, kaleidoscopic costumes and the multicoloured illumination of some of Bristol’s most well-known buildings act as a reminder that is that time of the year again: Pride Month.

As the celebration of solidarity and inclusivity paints cities across the UK in rainbow hues, Bristol is acting as a forerunner in its celebration of LGBTQ+ activism and expanding its Pride traditions. Recently named one of just 4 UK cities to be ranked within the Top 50 Pride Destinations in the world, Epigram Features presents its guide to Bristol’s jam-packed two-week contribution to Pride. 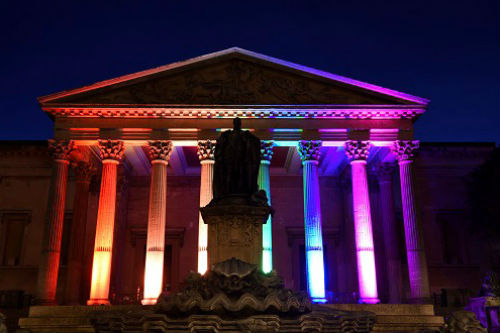 The University's Victoria Rooms illuminated in rainbow colours in support of Pride (image credits:University of Bristol)

Firstly, what is Pride Month?

Pride Month provides a crucial space to campaign for the underrepresented issues of the LGBTQ+ community. The annual, globally-celebrated festival has deep-seated activist roots. The march that takes place every June or July commemorates the Stonewall riots in New York City in 1969 which paved the way for the first Pride March in the US in 1970 and ignited the gay liberation movement more widely.

However, Pride today is for everyone. Whether from the LGBTQ+ community or otherwise, Pride provides the means to show support and solidarity for community.

a parade, a political demonstration, a party, an exploration of the arts and all-round celebration of inclusivity and diversity.

Now in 9th year in Bristol, the line-up shows that Pride is no longer just about the parade, it is so much more and something different to everyone who participates or spectates the events: It is a political demonstration, a party, an exploration of the arts and all-round celebration of inclusivity and diversity.

Bristol Pride is the largest free Pride event in the UK. Opening with the integral Pride Day March beginning in Castle Park, taking the festival back to its activist roots, the parade is a reminder that hate and discrimination holds no place in the City of Bristol through the participants show of visibility and solidarity. The ensuing events will see celebrations take over Millennium Square which will be transformed into a multi-stage open air music festival showcasing over 100 acts, from local troupes to national names like Republica and Alexandra Burke.

Bristol Pride have said they are 'proud to be different'. Indeed, the unique intersectionality of its event hosted in association with UK Black Pride and KIKI Bristol demonstrates that Bristol Pride is a platform that is committed to accessibility and reflecting the diversity of the city.

#FridayFeling? It's BRISTOL PRIDE NEXT WEEKEND!! Nearly a whole year of planning and a LOT of hard work from a small team of volunteers. check out our 2017 video to get you in the mood. https://t.co/Z7hwfsxY2O #bristolpride #pride #bristol #LGBT+ pic.twitter.com/DENenY4cHi

However, Bristol Pride is so much more than the main day Parade and music festival. From award-winning cinema to comedy nights, here are Epigram's alternative picks for Bristol Pride 2018:

Critical issues at the heart of LGBTQ+ community are being explored through the medium of theatre and performance in this year’s line-up. Theatrical highlights include the Dragonfly Theatre’s poignant and emotional piece HIV Monologues, and local group Degrees Of Error’s more up-beat comedy Drag Murder, She Didn’t Write.
Where: The Wardrobe Theatre
When: 10th July

Queer Vision is Bristol Pride’s Film Festival. Hosted at the Watershed, it has been dubbed by the Guardian one of the ‘Best LGBT film festivals in the country’. The team have hand-picked the best independently-made feature, animation and award-winning short films.
Where: The Watershed, varies dates

The Community Tent will host over 100 organisations who work in connection and support of the LGBTQ+ community. The hub will be the place to come and find support and the inspiration that lies at the heart of Pride.
Where: Millennium Square
When: Pride Day, 14th July

Pride’s Comedy Night is returning but following its huge popularity in previous years, it has upgraded to its new home of the Arnolfini. Regularly a highlight of the festival, the night will be hosted by comedian Jayda Adams.
Where: Arnolfini
When: 12th July

Just when you thought the celebrations couldn’t get anymore inclusive, this year’s calendar includes the ever popular Pride Dog Show in association with Bristol DAWG! This year it is sponsored by the University of Bristol, the free event showcases Bristol’s proudest pouches with awards including the likes of fanciest coat, proudest pet and waggiest tail.
Where: Castle Park
When: 7th July

As Pride Day comes to a close, the Pride festivities will take to the night as the O2 Academy Is once again imbued in rainbow, glitter and kaleidoscopic hues for this year’s official afterparty ‘Tempest’.
Where: O2 Academy
When: 14th July

There are plenty of ways for students to get directly involved as the University is returning as a sponser and supporter of Bristol Pride 2018. In addition to hosting a banner workshop with the staff and student LGBT+ network and societies, the infamous victoria rooms will once again become a multicoloured spectacle for the duration of the two-week festival following the success of this in previous years. Spectators are encouraged to take and share the pictures to social media using #Bristolpride.

A post shared by Streetenvy Dance Academy (@streetenvydanceacademy) on Jul 5, 2018 at 5:06am PDT

A full calendar of events can be found here.

What do you think of this year’s Pride line-up? Will you be attending the festival? Let Epigram know: