As part of a new regular series on the history of Bristol, Features Editor Ollie Smith looks at one of the city's most controversial figures

In the wake of his portrait's removal from the Lord Mayor's office it seemed only appropriate to begin this series with Colston. There has been much debate around the man in recent years with the renaming of Colston Hall another example of how his controversial past has led to discussion of his legacy. He has become part of a wider debate on renaming and removal with the university subject to similar calls last year to rename the Wills Memorial Building due to the family's own historical links to the slavery.

Edward Colston was born in Bristol in 1636 into an already wealthy merchant family with his father William, a one-time sheriff of Bristol during the Civil War, owning an estate in nearby Winterbourne.

Following the end of the English Civil War the young Colston was schooled in London before becoming an apprentice at the Mercers' Company in 1654. After spending time abroad Edward came to own his own company in London where he was involved in the trade of commodities like cloth and wine.

Here is where the controversy occurs as much of his business also involved the direct sale and transportation of slaves. Colston's business empire at its height included more than 40 ships which in total are thought to have transported around 80,000 slaves. Around 20,000 slaves likely died during the Atlantic crossing on Colston's ships.

Colston eventually became deputy governor of the Royal African Company, an institution backed by Charles II that was granted a monopoly of the British slave trade. It was through this company that Bristol gained much wealth with Colston's dealings contributing to Bristol becoming the hub of Britain's slave trade. Later, Colston would come to directly deal with the royal family and sold stock in the Royal African Company to king William III.

By the 1690s Colston ended his involvement in the slave trade and instead became a money lender, granting loans to the government on several occasions.

Colston's legacy was, until recently, dominated by his philanthropic work and the wealth he brought Bristol having given heavily to churches and hospitals and created his own school and two almshouses which offered accommodation to the poor. In today's money the donations would be in the millions and so he came to be highly regarded during his day.

As a result his name is found across the city. There are numerous streets, buildings, statues, paintings, schools, and even church windows with Colston in their names. Even the university bears his impact with the dolphin on the crest representing the Colston family and one of the halls of residence being Colston Street.

Some of Bristol's oldest charities like the Dolphin, Grateful, and Anchor Societies were founded by Bristol citizens who cited Colston's charity as their main inspiration. The Colston society was founded five years after his death with the intention of carrying on his charitable work. 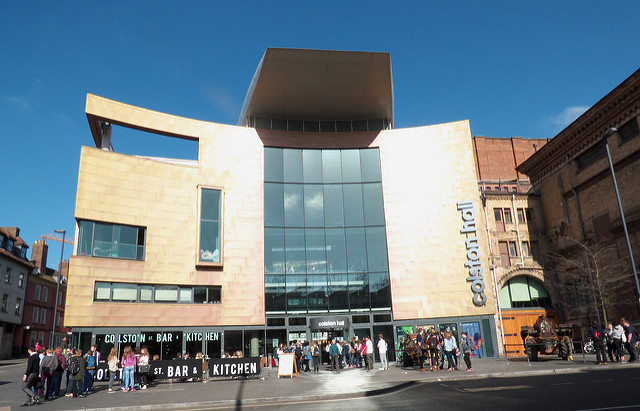 Colston Hall which is being renamed (image credits: Flickr/Sam Saunders)

Colston was a devout High Church Anglican and often made it clear that donations he gave required organisations to show devoutness to his religion. Pupils in his schools were required to study Anglican principles.

In 1710 as a result of his high regard in is home city he became the Tory MP for Bristol but only held the office for three years after deciding not to continue due to his age.

Edward Colston died in London in 1721 at the age of 84 and was buried in All Saints Church in Bristol. He never married so much of his wealth passed on to his niece Mary Edwards. His will left £6,000 to Anglican clergy (well over half a million in today's money) as well as continuous payments to local schools.

In 1895 the statue of Colston found in the city centre was put in place with a plaque that read ‘Erected by citizens of Bristol as memorial to one of the most virtuous and wise sons of their city’. It was announced earlier this year that a new plaque would be put in place that recognised Colston's slavery past.

Colston's legacy is certainly a mixed one. The man was directly responsible for the suffering of thousands of African slaves and came to be relied on by both Bristol and the British government through the wealth he had gained from that suffering. Debates will continue about how to handle such a contentious legacy.

How do you think Bristol should handle Edward Colston's legacy? Let us know...

Star Wars, Kelly Marie Tran and the Dark Side of Fandom