The Bearpit to become The Circle in £3.5m transformation

The Bearpit, which sits in the centre of St James’s Barton roundabout, is to be transformed into a £3.5 million food innovation hub and renamed The Circle.

Situated between the Broadmead/Cabot Circus retail district and Stokes Croft, the Bearpit is an important gateway into Bristol and is often associated with the city’s edgy, bohemian reputation. Ursa the Bear, a 12ft sculpture erected in 2013 to signify regeneration and rejuvenation, stands guard over the skaters, community activists and commuters who frequent the Bearpit. 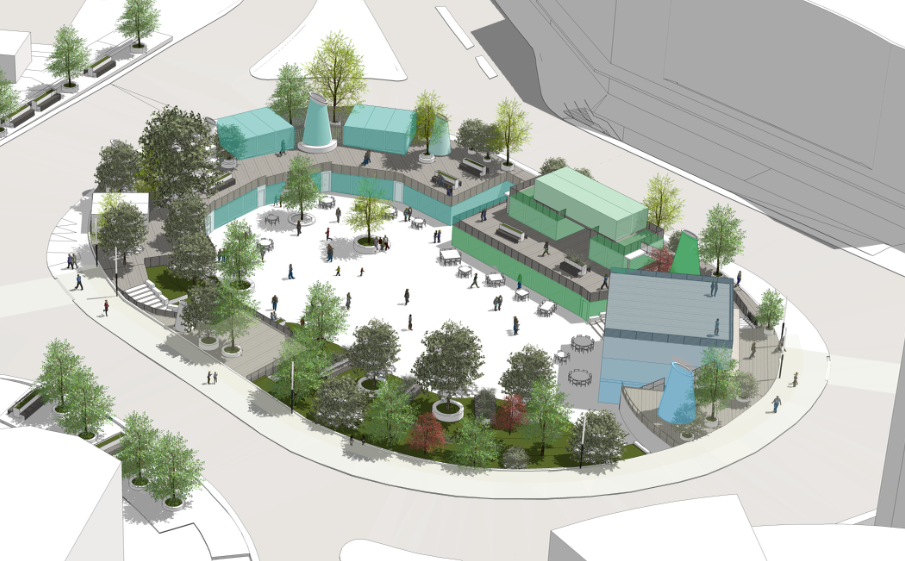 Vision of how The Circle would look (Image credit: APG Architecture for Bearpit Bristol CIC)

The story of this transformation began in 2011 when the Bearpit topped Bristol Live’s list of worst streets for anti-social behaviour. A group of volunteers, hoping to create a sense of community and well-being in the area, set out to change this. Slowly but surely, the community activists felt like they were making an impact.

In 2012, Bear Fruit emerged selling an array of fresh produce and grew into a successful business now named Bare Foods. In 2014, a team of volunteers from Incredible Edible Bristol created the Bearpit Garden with a vision to foster a more welcoming and inclusive space. Community action days were organised, art shows were held and a new skate feature was constructed.

With the wind seemingly in their sails, the volunteers formed Bearpit Bristol Community Interest Company in October 2016 under the loose leadership of Miriam Delogu, Robin Halpenny and Simon Green. Like the Bearpit Improvement Group, who came before them, the aim of Bearpit Bristol CIC was to ‘drive social change in the heart of Bristol through food and community building’.

‘For a while it seemed that everyone was coming with us’, Simon wrote in a blog post in January this year, ‘Good feedback, reviews, likes, tweets, bookings’. The group held an incredibly successful community action day last April which saw over 1000 people descend on the Bearpit to tidy, replant and repaint the area.

Through trading and community events, Bearpit Bristol CIC felt like they were increasing the number of people walking through the area, reducing anti-social behaviour and making the space more attractive to Bristolians. For a while, it seemed like they were right.

But despite ‘these little moments of sunshine’, Simon explains, a storm cloud still loomed overhead. The improvements, whilst admirable, had failed to tackle the Bearpit’s underlying problem. It’s physical layout and poorly lit tunnels facilitate anti-social behaviour including street drinking and drug dealing. Most of Simon and Miriam’s staff have experienced some form of verbal or physical intimidation.

I have never doubted that there is #beautyinthebearpit. Someone asked me why this space means so much to me. For me it's about tackling injustice, about giving hope and perseverance. Knowing there will be hardships but that together anything is possible. pic.twitter.com/3oNYg3oeOm

Some label Bearpit Bristol CIC’s activities as attempted gentrification and ‘homeless bashing’ but Simon vehemently denies this. The main issues in the Bearpit, Simon argues, are street drinking, drug taking or selling and crime. ‘In the Bearpit, homelessness or rough sleeping are not the major issues that many people believe them to be’ he states.

‘The agencies we work closely with told us this before we knew’, Simon explains, ‘this comes from experts in their fields and we respect their judgements’. It is important to make a clear distinction between homeless people who may be seen in the Bearpit, a homeless charity tells me, and a persistent anti-social behaviour problem which has existed and is not necessarily connected with homeless people.

Will The Circle flourish as a community project or will it be another flash in the pan?

Bristol’s cultural reputation is built on street art but tagging which goes unpunished in the Bearpit, Simon argues, legitimises anti-social behaviour. ‘Allowing semi-permanent structures to be built’, he continues, ‘contributes to a feeling of an unfinished space.’ Bearpit Bristol CIC had only scratched the surface of the problem.

On the 27th February, Bearritos and the Bearpit Social ceased trading citing fears for the safety of their staff members.

It seemed that the project really had failed. But, behind the scenes, the seeds of a radical transformation were being sown. In May, plans for a £3.5 million food innovation hub were unveiled. The project, known as The Circle in reference to the circular nature of sustainable food supply, is split into three spaces: Food, Community and Incubation. It aims to create over 160 full-time, part-time and volunteering jobs centred around improving lives through food.

The Food Hub aims to ‘showcase urban farmers and sustainable food outlets, with an emphasis on low wastage and local production. The Circle will include community spaces, a public, edible garden and The Incubation Space which focuses on education and research.

The project is still in its consultation phase and is working with a number of institutions including the University of Bristol, UWE, Bristol City Council and St Mungo’s homeless charity. Simon, in his new role as Learning Development lead, tells me that the input and opinions of students would be greatly appreciated. You can fill out the Public Consultation form here: https://docs.google.com/forms/d/e/1FAIpQLSemlk5R3oAONwkPRs6Qm_M8yhz-3dtr0XaqVASysrle9SU3FA/viewform. 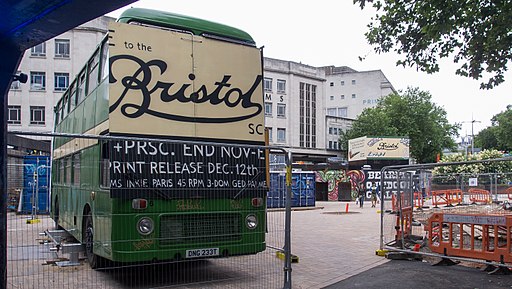 The green bus out of which Bearritos operated (Image credit: Wikipedia Commons/Ed Webster)

In the meantime, a new trader will occupying the green bus from mid-July and a community café and new food offering will be established in the Bearpit soon. There will be a program of events taking place over the next three months and the Bearpit Bristol CIC is actively seeking groups or individuals who would like to share any aspect of their work which may be relevant to the project.

There is hope, then, for the future of community building in the Bearpit. It remains to be seen whether the character of the Bearpit as a place of underground art and skate culture will be retained after the transformation. Will The Circle flourish as a community project or will it be another flash in the pan?

In 2013, Bristol City Council published a Retail Study which included opportunities for turning the Bearpit into ‘land available for future retail and leisure development’. Only time can judge The Circle but it is worth considering what the alternative solution to the Bearpit’s anti-social problem could have been.

What do you think of the changes to the Bearpit? Let us know...