"The snow is the worst thing that's ever happened to us" bassist Rob tells me as I sit down to interview the band. My walk to the Louisiana that night entailed tentatively sliding down Bristol's many hills, each of which was now sheened in ice, and I couldn't help but consider the problems that this might spell for the start-up indie band playing their first ever headline show in Bristol. "It's alright," lead singer James admits, "we just had to drive slow, but our van is so terrible that it was just doing what it does anyway. It just meant that all the other traffic was moving at the same pace we usually do".

Stories of clapped-out vans and struggling music venues abound in my interview with Marsicans, and there's a real sense of an indie band paying their dues, battling the elements to put on a show. Rob and James are joined on the sofa by guitarist Oliver, while drummer Cale stands on the opposite side of the tiny Louisiana backroom, meaning that there are about two feet of space separating them. Toying with what this spatial dynamic might represent, James tells me "there's a tension between Cale and the rest of the band. Cale likes chord progressions that sound wrong. But we reckon one day he's gonna come in with a finished twenty track concept album for us all to play through". "I'm gonna hook up with Elon Musk and make some music," Cale derides.

If Cale is the more experimental, Radiohead-esque component of Marsicans, then that is yet to figure in the band's music. Their set is an exercise in sun-drenched, care-free indie, which might have sounded more at home in the late noughties. Pressed as to whether they recognise the challenges facing the indie genre as threatening in any way, Rob admits that the "common message going around is that guitar bands are dead. I get it, though," he continues; "ten years ago the indie genre was huge, we grew up listening to Arctic Monkeys and stuff. There was a new band every week. Whereas now urban music's massive, and grime and stuff like that." "The cool thing is though that bands like Wolf Alice are big fans of people like Stormzy" Oliver interjects, "you get these genres really supporting each other now. I don't think anyone in alternative music thinks that another alternative genre is the problem. The big thing is that radio generally is a lot of big US Pop. That's what's gonna be the constant, the subgenre of stuff just cycles around it. There'll be guitar bands again."

Marsicans are less markedly optimistic when we come to talk about the logistical changes threatening the gig industry. Talking about the closure of independent music venues, including flagship Leeds venue The Cockpit, James laments that "the venue where we all cut our teeth isn't a music venue anymore. That's where all of the touring bands went through, so it felt like a huge deal to play there. In the early days, it helps you to feel that you're getting somewhere". He goes on to explain that every show of their tour so far has been hampered by noise restrictions, before yielding that "people have just made it easier for themselves and that cuts out bands… it's harder for venues and promoters to feed five people and pay five people than it is to hire a DJ."

I'm scared that I've uncovered a dejection and anxiety in the band at this point, but their drop in enthusiasm is as short as one might expect, given the joviality and optimism which threads itself through their music. Marsicans begin regaling me with news of their most recent achievements, which are made all the more impressive after hearing of the challenges that indie bands face at the moment. They mention their set at the legendary Maida Vale studios and speak to me about their interview with Huw Stephens after being picked as one of his Alternative Tips for 2018. "He's a lovely guy, but it's pretty weird listening to the radio and hearing yourself" James digresses, "you kinda dream about that." "In the last year, we've started actualising childhood fantasy" Rob continues, "as kids, we were like we wanna be pop stars, we wanna do that." After speaking to them, Rob's earlier hopefulness about the return of the guitar band seems unneeded, and Marsicans come to represent a case in point about the survival and persistence of indie. 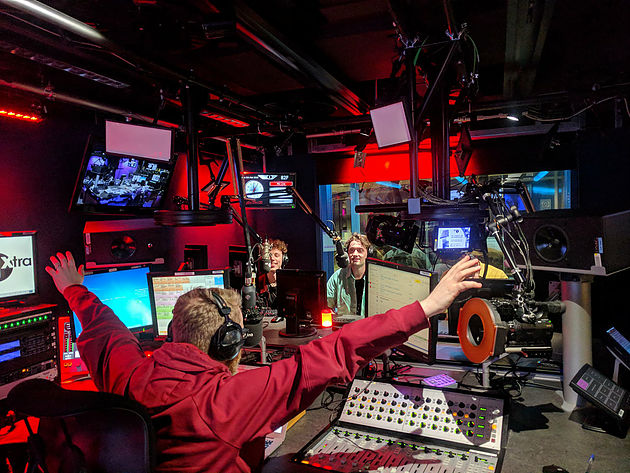 Marsicans always sound like a band who really enjoy their craft, but as a band finally fronting a headline tour after years of paying their dues, they sound ecstatic. Their energy is untouchable, as they launch into ‘Friends' and maintain a dizzyingly fast tempo up until the aptly named ‘Throw Ourselves In.' Their determination to stand out leads to overstated and heavy-handed staging, however, and the audience are blinded by an obnoxious light show which proves too big for Louisiana, and which, quite frankly, the band doesn't need. Tellingly, the sets highlight comes in the form of Marsicans' stripped-back recent single ‘Wake Up Freya.' Written for James' unborn niece, the song demonstrates a really touching sensibility and grants the band an opportunity to exercise their airtight and surprisingly powerful harmonies. There's a considered and knowing musicality demonstrated here which is absent from most contemporary, synth-heavy Indie Pop, and which Marsicans ought to platform more readily.

Speaking of the writing process behind ‘Wake Up Freya,' James says: "I was watching the news, and it was terrible, and I thought to imagine coming into this world and experiencing all of this… but then also I thought, pretty good innit". This surmises what the Marsicans set out to do, and what they are largely succeeding in doing. Rather than providing social commentary on the big issues they recognise, the band playfully turn a blind eye, seeking to saturate and exaggerate the small, understated and humble beauties that can be derived from everyday life. While contemporary urban music is providing the social commentary we urgently need, Indie Pop pieces like Marsicans offer an unbridled escapism, and are therefore unlikely to disappear.

Leeds or Bristol bands: which is better? Get in touch!