USS is a pension fund set up to provide a decent retirement for staff. Employers want to end guaranteed pension benefits meaning the average lecturer will lose £10,000 a year in their retirement. The UCU strike aims to reopen negotiations to ensure these plans change.

88% of UCU members voting supported this strike in a legal ballot, many of which are members of staff at the University of Bristol. They state that without a decent pension staff will be forced to leave or work abroad where they will receive fairer pay and financial security. 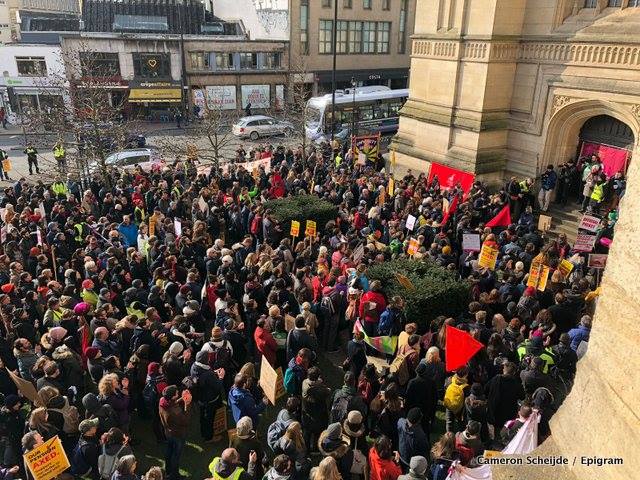 One striking lecturer at the University told Epigram: ‘The academics are getting poached by google and they being forced to go abroad. If we make the prospect of working at a university even less attractive, then we’re going to lose these people in the future. It all has knock-on effects.’

He added, ‘It’s going to stop people going into teaching’.

An email from the University was sent to the staff recently informing them that they have a right to strike but their pay will be deducted if they do not reschedule cancelled lectures and open days. The university has threatened to deduct their pay up to 25%.

Another one of Hugh Brady's strike emails was distributed around University on Wednesday, the day before the first strike. It had been crtically annotated by an anonymous student and was entitled 'Tugging on the Chancellor's robes'. 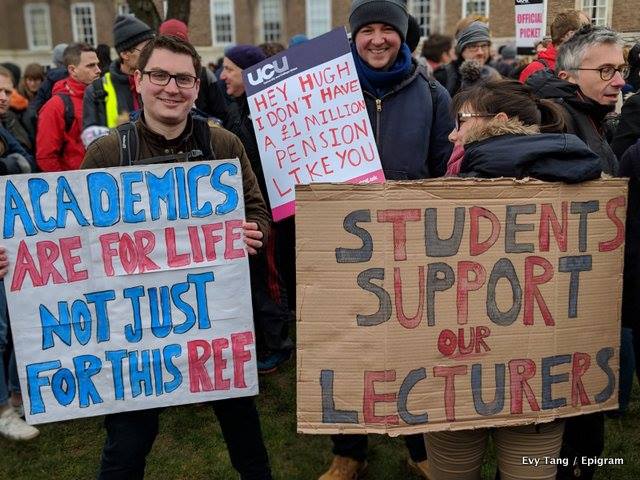 A UCU rep present at Thursday's march stated, ‘we want out Vice Chancellor to join the eleven other Vice Chancellors who have agreed we need to go back to the negotiation table.’ They encourage students to email the Vice Chancellor and let him know what you think about the ‘propaganda he sent around to you all’. She then asked, ‘what’s the point in a shiny new building if the librarians and staff don’t want to work in it?’

Signs revealing the anger and disappointment targeted at the Vice Chancellor were numerous with one reading, ‘this is in-Hugh-mane’.

Jonathon Matthews, a physics lecturer from the university said: ‘This happened in the 70s and it will happen again, if universities weaken the deal for academics then America will poach them.’

The march involved hundreds of students, staff and members of the public holding signs and chanting on the streest to show their support. They walked around campus on Tyndall’s Park Road, by the ASS library then went through the triangle and down Park Street ending on College Green. Mason Ammar, Undergraduate Education Officer, and Tracey Hooper, Bristol UCU President, were amongst the speakers.

The official picket lines for the strike have been named as Woodland Road, Wills Memorial Building, Senate House, the BioMed building and the SU. 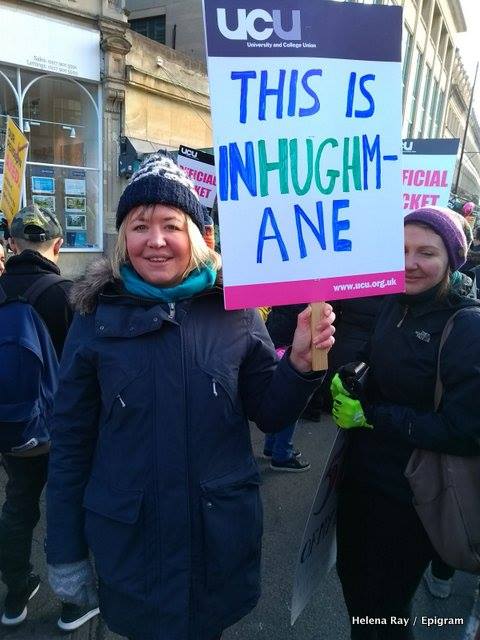 This pressure had the desired effect on Friday evening when Hugh Brady released a statement calling for UUK to reopen negotiations with UCU.

Sam Gymiah, Universities Minister, has also urged both sides to return to the negotiating table 'without any preconditions', adding that he is 'very concerned' about the impact on the strike is having on students.

UUK and UCU set to meet on Tuesday after a invitation on Friday from UUK. However, UUK have said 'talks would not re-open' on the decision taken earlier this year about changes to the pension scheme, meaning any talks will not lead to a reversal to the changes causing the strike in the first place.

Strikes continue Monday, Tuesday and Wednesday of next week, with another rally planned for Monday. It has also been announced this week thats strikes could be extended to impact exams if a solution is not found.