Cameron Henderson heads to St James Barton Roundabout (better known as the Bearpit) to meet some of the folks behind the ever-evolving artworks and murals in this important space.

Teenage skaters glide past bustling businessmen, elderly couples shuffle through the tunnels whilst artists paint upon their walls, seated at the piano a student is playing classical music, not ten yards from him a group of homeless people listen in. 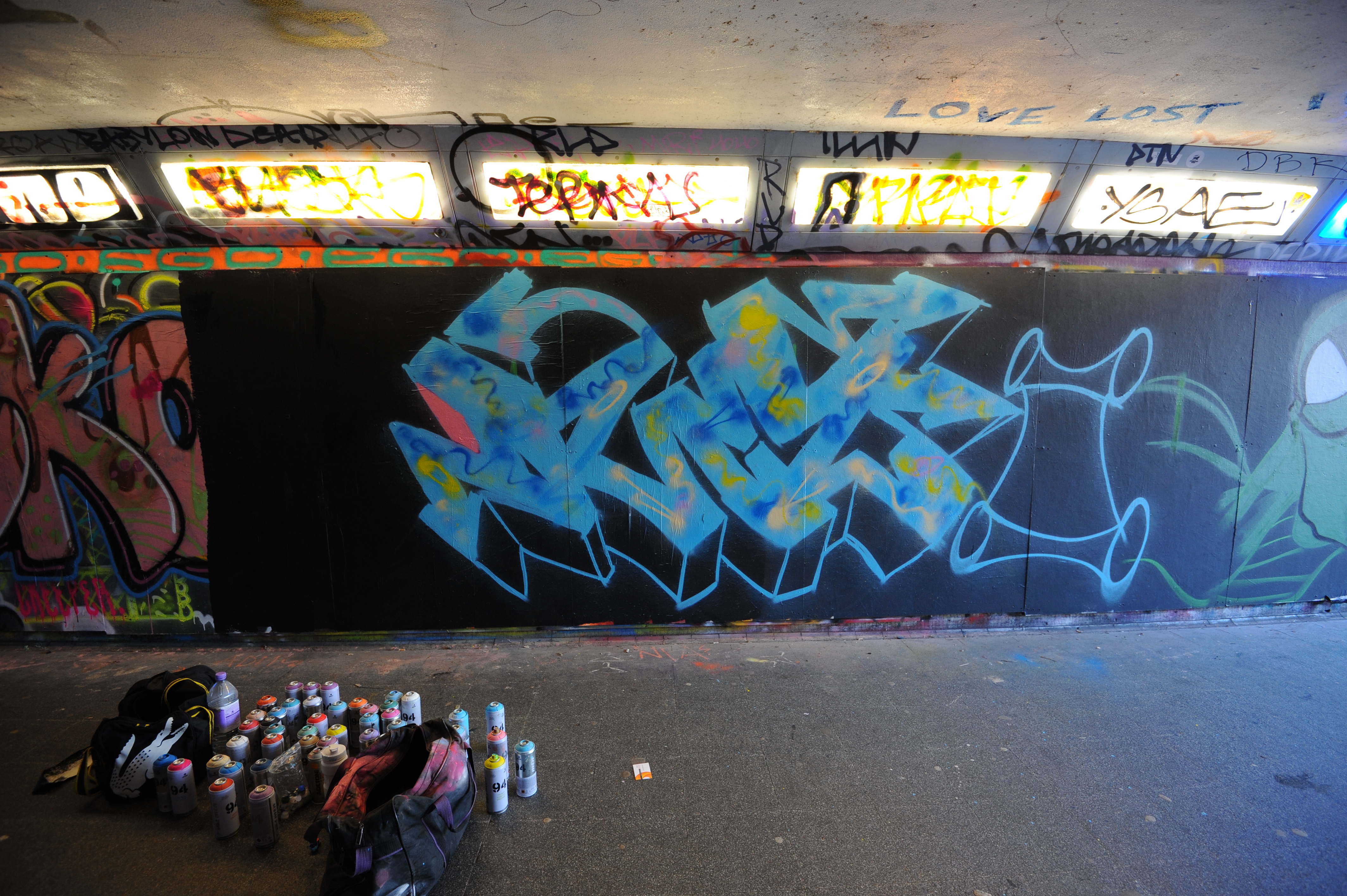 It’s Sunday, and I’m in the Bearpit for what has become a monthly repainting job organised by the Bearpit Community Trust - a group of volunteers whose aim is to manage the artwork of the Bearpit, maintaining a balance between standards the council threatens to impose and outright chaos.

I find it hard to comprehend that a city so celebrated for its street art could face so much opposition from within.

Not quite knowing what to do with myself, I pick up a roller and start to paint. I’ve been told to paint over the tags and other less impressive pieces of graffiti, leaving the works that take up the panels designated for the exhibition untouched. As I paint, Bearpit Community Trust volunteer Benoit Bennett (aka. object) explains to me the controversy surrounding street art in the Bearpit.

The council are particularly concerned with tagging, as they view the practice as merely vandalism, rather than a form of art.

Bristol is of course renowned for its rich history of street art stretching back to the 1980’s, and to many in Bristol the Bearpit is the defining symbol of this aspect of the city’s cultural heritage, so, I ask, why is the council attempting to crack down on it?

According to Benoit, the Council claim to be responding to complaints from members of the public about what they view as unsightly vandalism, fulfilling their responsibility to maintain this public space. The council are particularly concerned with tagging, as they view the practice as merely vandalism, rather than a form of art.

Benoit speaks passionately about his resentment of the council’s imposition of restrictions on artistic freedom, viewing the Bearpit as an important practice space for young artists to hone their skills.

when confined to an area such as the Bearpit, [graffiti] in fact self-regulatory

What is more, he believes that using it as a practice space will keep much of the street art to which the council is opposed concentrated within the Bearpit rather than spread throughout the city, as well as improving the quality of street art in Bristol as a whole. 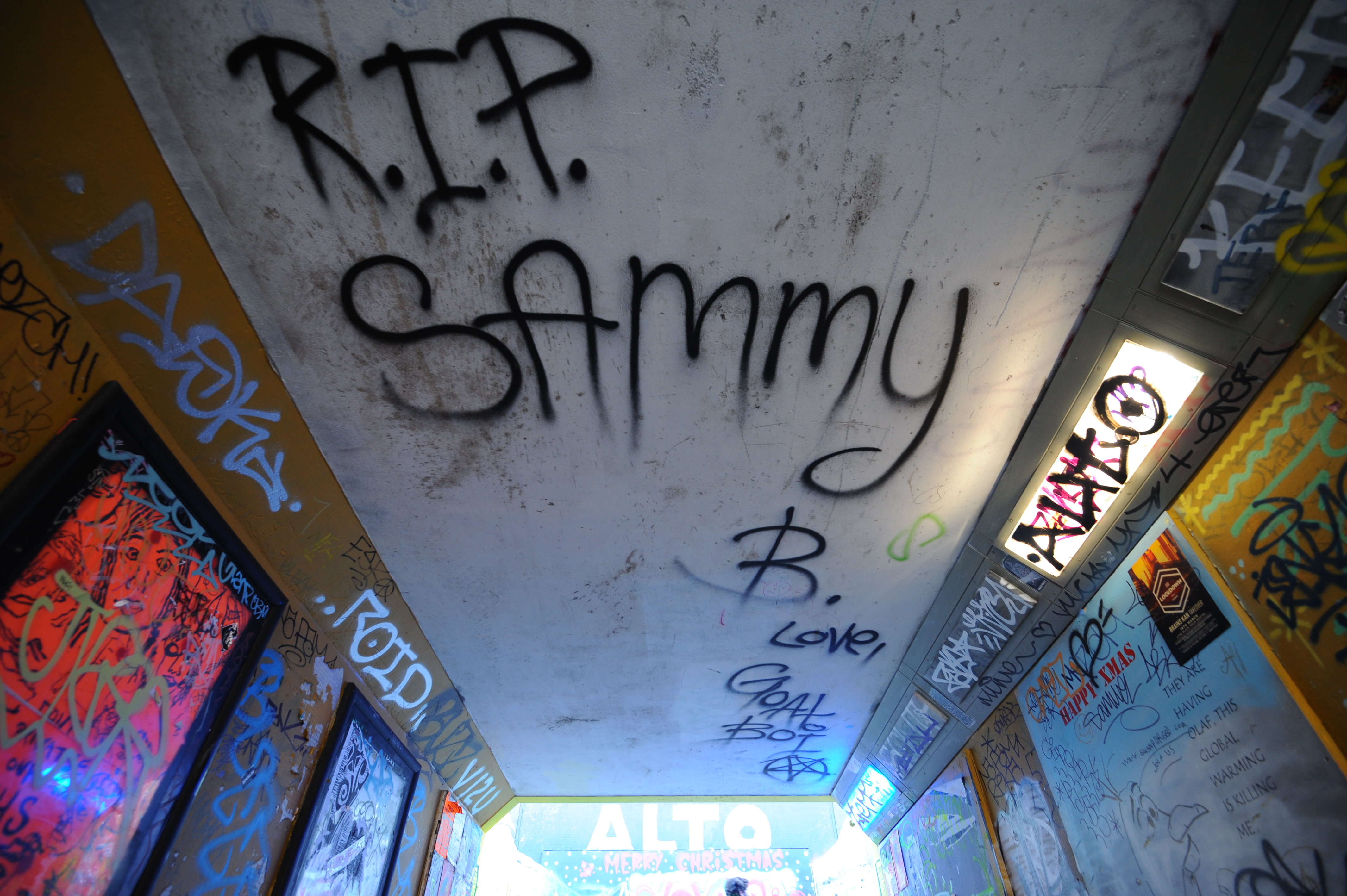 He makes the pertinent point that graffiti, when confined to an area such as the Bearpit, is in fact self-regulatory in the sense that artists will paint over other works they deem substandard. As an outsider I find it hard to comprehend that a city so celebrated for its street art could face so much opposition from within. 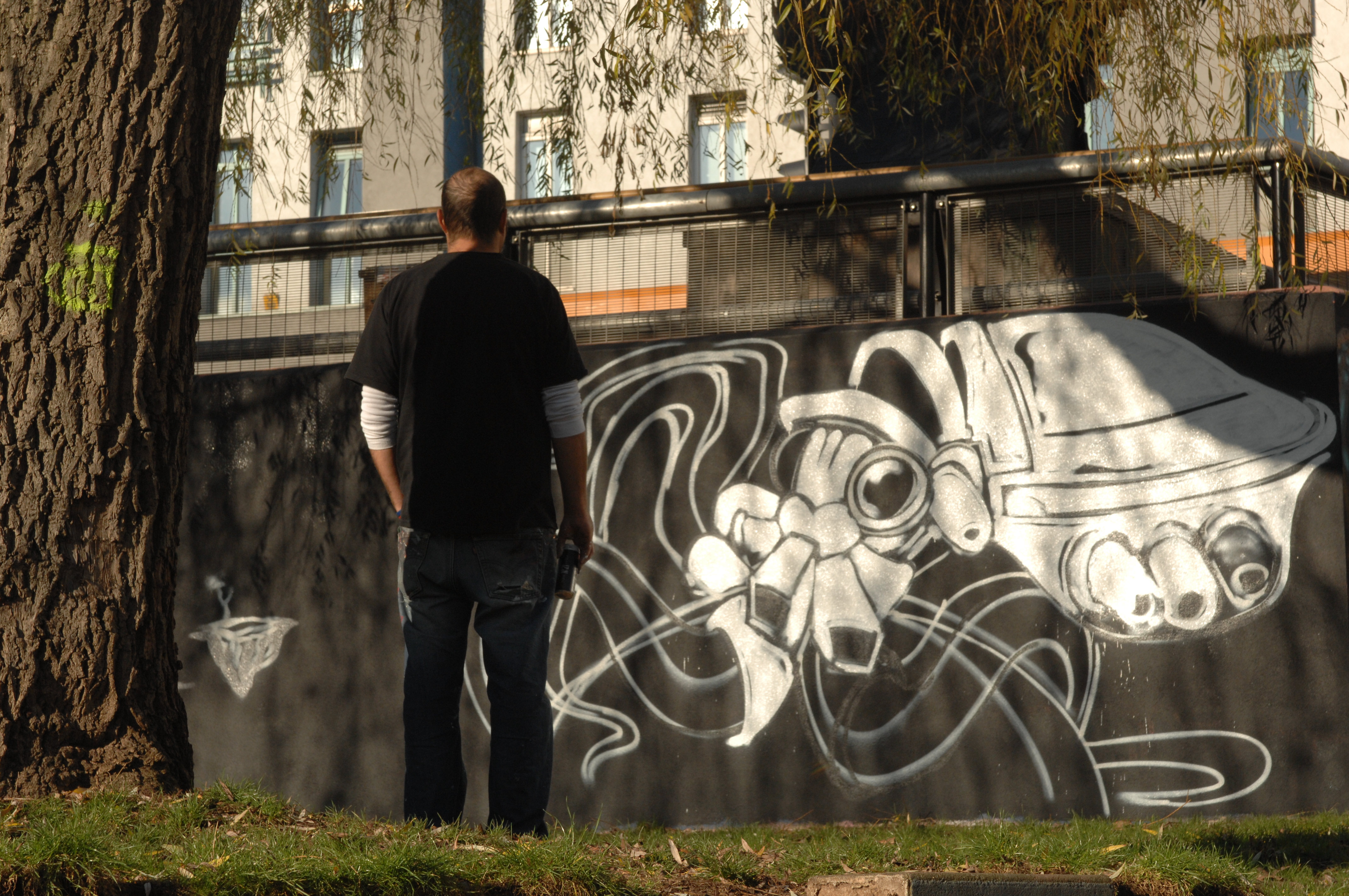 The most recent reason for conflict has been over the controversial removal of a panel on WWI protester Walter Ayles from an exhibition on Bristol’s radical history. The panel is due to be replaced; however, once again its removal brings to the forefront issues surrounding artistic freedom and local government’s power to censor individual expression - who controls this space? This seems to be the principal dilemma of the Bearpit, whilst the most obvious answer seems to be that it is a space for the people, a space for everyone.

[is] the attraction of homeless people to the Bearpit symptomatic of its ... appearance[?]

The primary concern of the council on the other hand appears to be the link between petty crimes such as vandalism and the broader problems of drug taking and violent crime associated with the homeless community that inhabit the Bearpit, seemingly viewing the attraction of homeless people to the Bearpit as symptomatic of its aesthetic appearance.

the people of the Bearpit lack [...] faith in the council’s efforts to aid the problem of homelessness in Bristol.

This very tangible sense of community can be seen with the touching tributes to its recently deceased members: the likes of Punk Paul and Sammy B, that are littered about the Bearpit. The deference shown to these characters speaks volumes for the support they provided to many within this community; Sammy B was praised for his positive influence within the community, encouraging others to take up music to make money, rather than simply begging on the streets.

'Voice of the Past' exhibition in the Bearpit Outdoor Gallery, created by the #PRSC and Creative Youth Network out of designs commissioned to commemorate the lives of activists from Bristol's history, and celebrate their achievements. One of a series of events over October 2017 for Journey To Justice Bristol. #jtojbristol #JtoJ #activism #history #Bristol #BristolBearpit #Exhibition #Bearpit #bearpitoutdoorgallery #BristolArt #BristolStreetArt #WalterAyles #ConcientiusObjector #WWI

Punk Paul was known for his kind heart, remembered for giving away his last penny to those who needed it more. Sammy B threw himself off Bristol Suspension Bridge last year, while Punk Paul died in the Bearpit this year from a suspected ‘Spice’ overdose, around 70 people attended his funeral in October. He is commemorated by a plaque in the Bearpit, paid for collectively by members of the homeless community.

What is sad to hear is the people of the Bearpit’s lack of faith in the council’s efforts to aid the problem of homelessness in Bristol. Everyone I speak to appears to have the same opinion of the council—that they do not care. It seems that whilst they are aware of the problem of homelessness in the Bearpit, they would rather it was there than anywhere else—so long as the Bearpit is shunned by much of the public due to its reputation for homelessness and inevitable crime, the problem remains screened from public viewing, covered up in much the same way as the graffiti. 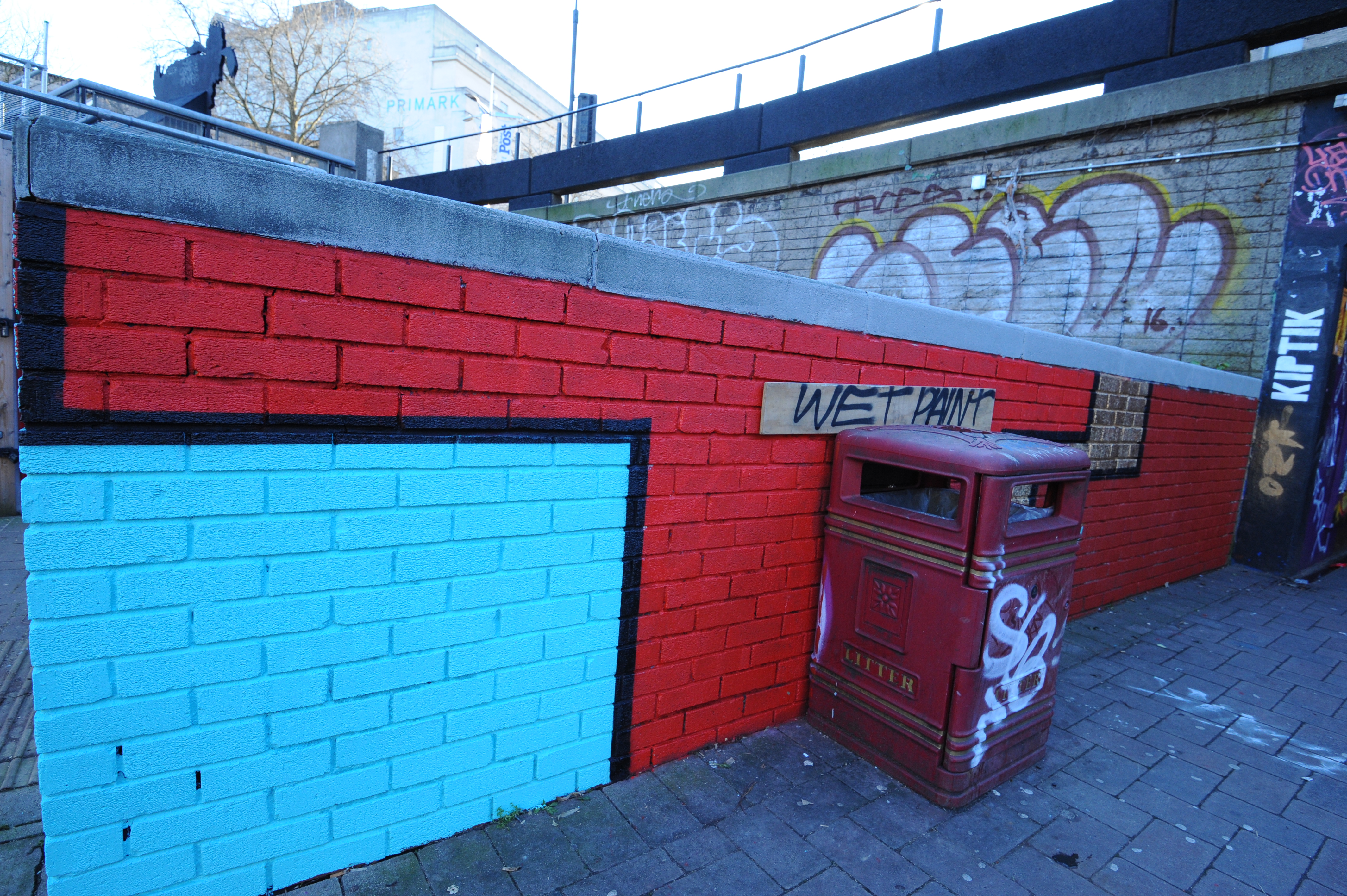 I am told how the police pass through the Bearpit on horseback once a week in a sort of parade. I cannot help noticing the ironic contrast between this ostentatious display of police presence and the startling lack of action taken. Indeed, a man has a ‘Spice’ attack while I am in the Bearpit—a paramedic quietly attends to him and the man comes around twenty or so minutes later, but no one bats an eyelid. I was less than thirty metres away and didn't hear or see a thing, such is the normality of these incidents.

Bristol has one of the highest rates of statutory homelessness in the country, with 1 in every 170 residents homeless

Today is Sunday, ‘Suicide Sunday’ according to Anton, a local man who comes to the Bearpit to people watch and provide aid to those who ask for it. The volunteer-run food banks are closed on Sundays leaving the local homeless community to fend for themselves.

It seems quite plain that more has to be done to help these people, indeed Bristol has one of the highest rates of statutory homelessness in the country, with 1 in every 170 residents homeless according to a report by Shelter. Meanwhile, St Mungo’s Broadway Charity estimate that the number of rough sleepers has tripled over the last 2 years. 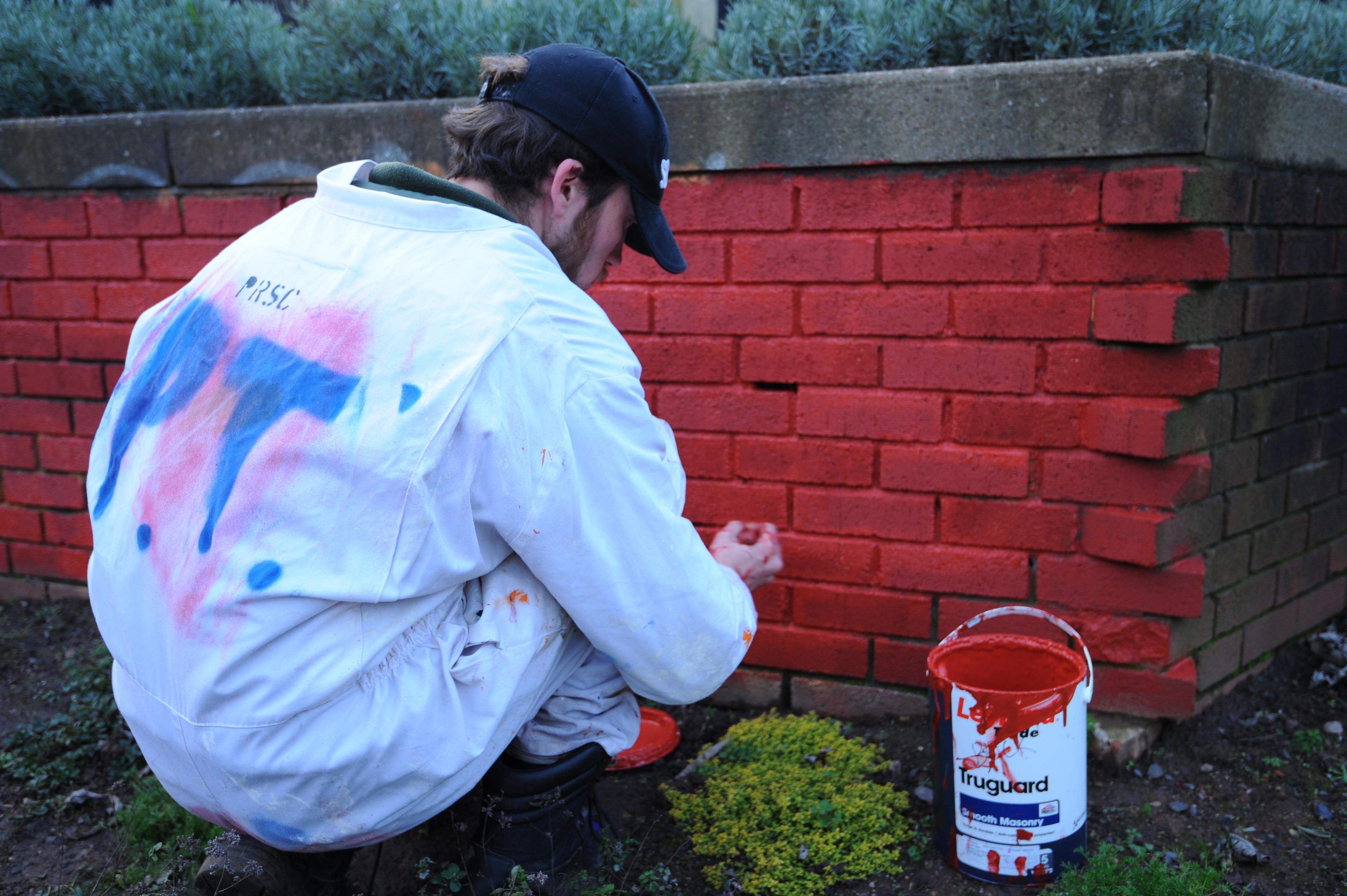 Attention has to be paid to the positive impact that cultural gentrification, encompassing street art, can have on locations such as the Bearpit. One only has to look across Bristol to the M32 spot to see this in action. Located beneath the M32 flyover, what was once a grimy area inhabited by homeless people and rife with drug taking has been refurbished after a crowdfunding scheme raised over £3000 in less than a month back in June.

The space is now a thriving skatepark and community space, drug taking and prostitution has been drastically decreased and the skaters who now dominate the space organise regular clean ups. Street art has also played an important role in changing the aesthetic of the space, making the area feel more welcoming, as well as encouraging young people to visit, thereby helping to change the demographic of the space’s inhabitants. 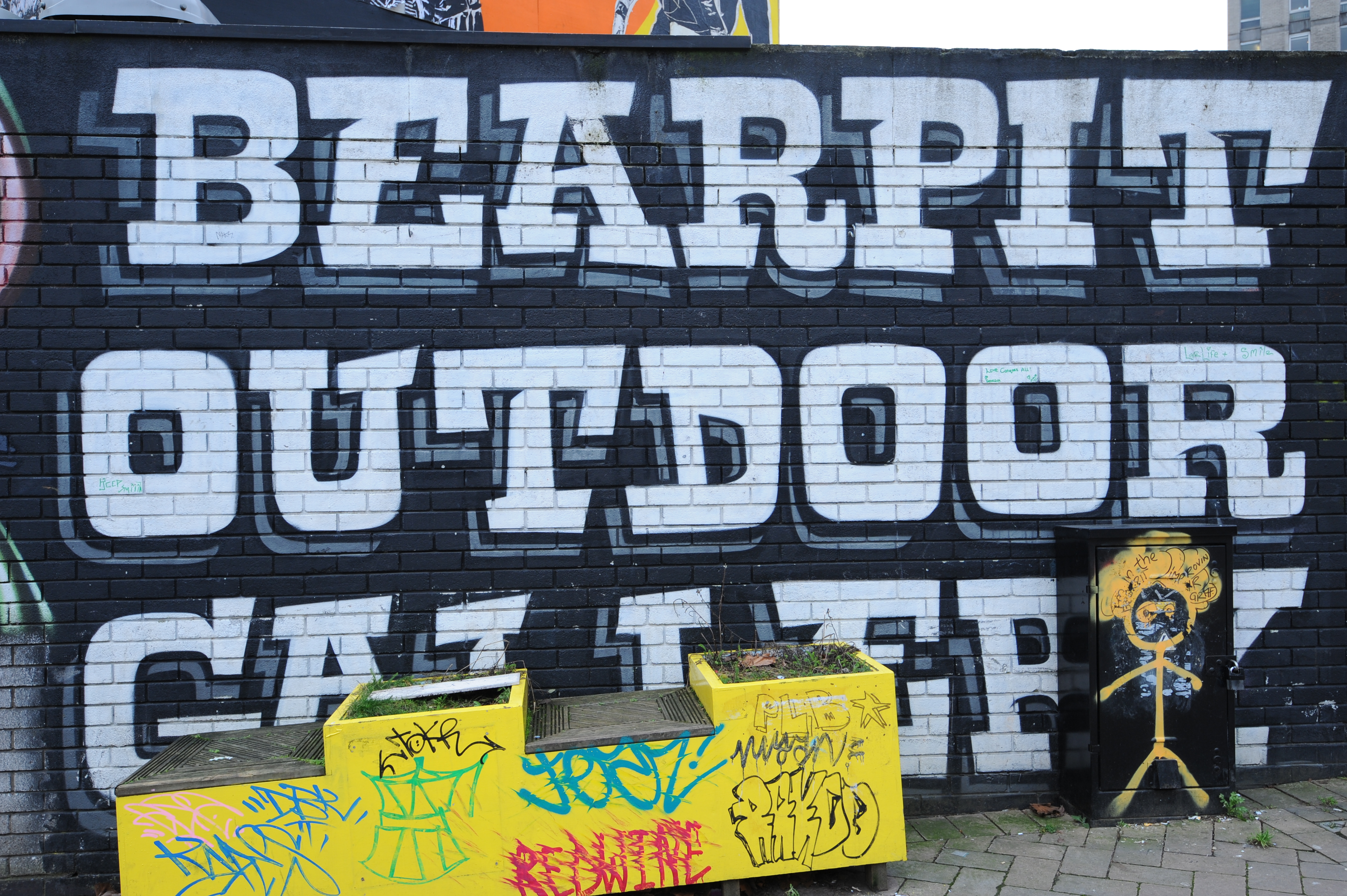 Yet still, young graffiti artists are persecuted by the police for their works—the problem appears to be treading the line between creativity and criminality. What does seem hypocritical however is how the likes of Banksy are venerated for their work, meanwhile his artistic contemporaries are persecuted and subjected to prison sentences completely disproportionate to the severity of their crimes.

In the BBC documentary ‘Vandals and Visionaries’, the street artist Glynn Judd aka. ‘Noir’, who had his worked displayed at the 2012 Olympics opening ceremony, speaks of the inmates he was locked up alongside, including murderers, rapists and cannibals - is this really justice?

In the city that plays host to Europe’s biggest annual street art festival, Upfest, more has to be done to bridge the gap between local artists and local government. The work of groups such as The People’s Republic of Stokes Croft is admirable: curating art exhibitions in the Bearpit and petitioning law makers to establish legal wall space to lessen criminal activity; however, it seems independent groups like them are single handedly upholding the city’s artistic reputation in spite of opposition from those in power. 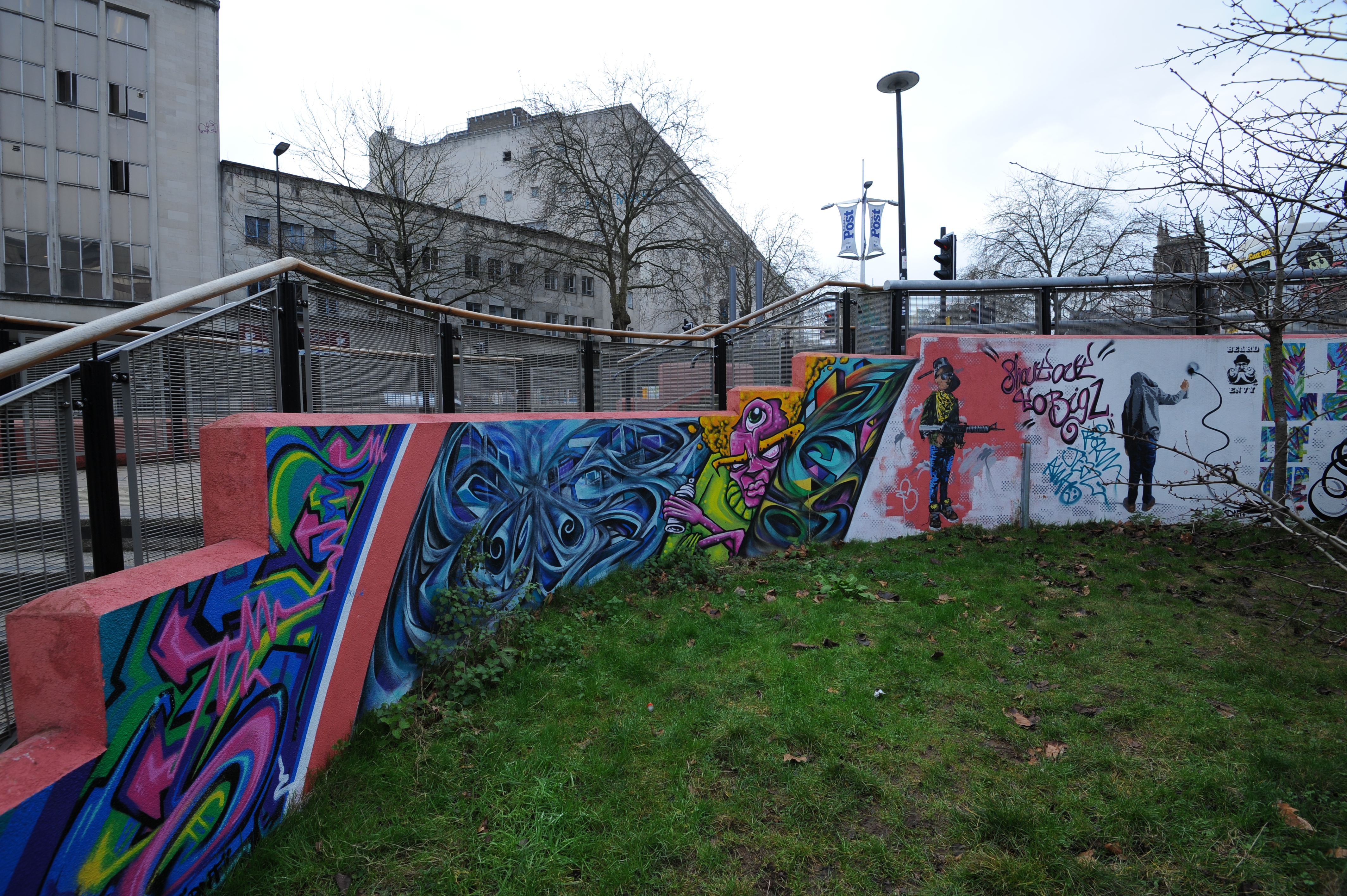 In this way the Bearpit acts as a microcosm for many of the city’s problems. Hearing the genuine human stories of the likes of Sammy B and Punk Paul made me come away from the Bearpit feeling deeply troubled. I find it hard to comprehend the amount of support these characters provided for others within their community, all the while dealing with their own personal problems, and the contrasting lack of support provided from those outside of it.

The fact that artistic expression, one of the few things that brings vibrancy and positivity to this dire situation, one of the few things providing an element of hope in its messages, is being attempted to be stamped out by an out of touch city council saddened me greatly. Meanwhile, the real problem of homelessness is ignored. According to Anton, the attitude of the police is: ‘shut your eyes and no one will know about them’.

I’m trying to make sure I make time to take photographs despite my busy schedule because the only way I’m going to improve is by practising. I’ve only been doing photography for less than a year so I need to focus on the fact that I’m still learning and will always be improving. (3/3) . Also, check out this awesome giveaway Rhino Camera Gear are running. http://swee.ps/ePGAsdAMw . . . #photography #canon #canonuk #750d #bristol #bearpit #bearpitbristol #graffiti #streetart #city #cityphotography #urbanphotography

Herein lies the dark irony of the Bearpit: located quite literally in the heart of Bristol, not only famed as a symbol of the city’s reputation for artistic innovation and youth culture, but also a cross roads, bringing together people of all walks of life from across Bristol, yet at is core lies destitution—but the city turns a blind eye.

All Photos Courtesy of Фото.ART
© All Rights Reserved

How do you feel about the council's attitude to the art of the Bearpit? Let us know in the comments below or on social media 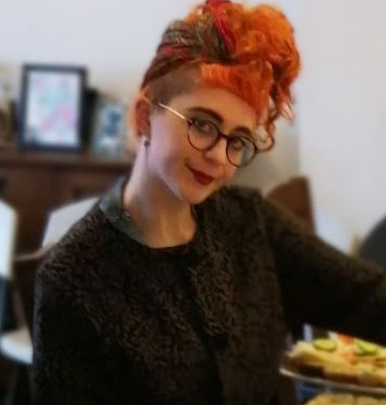